Written by Kate Barrington Updated August 18, 2016
Some species of freshwater fish are simply more aggressive than others. These freshwater "bullies" can be challenging to keep in a community tank but, if you learn the basics about them and their temperament it can be done.
Like dogs and cats, aquarium fish have certain temperaments depending on the species. Livebearers, for example, are typically peaceful and get along well with many species of community fish. Cichlids, on the other hand, have a tendency to be a little finicky. Some fish can even be classified as “bullies” because they tend to pick on smaller or slower fish. The difficult temperament of these fish doesn’t necessary mean you shouldn’t keep them in the home aquarium, it just means that you need to be careful. In this article you will receive information about the top 5 freshwater aquarium bullies as well as tips for keeping the peace in your community tank.

The following species of freshwater aquarium fish are known for being a little bit difficult in the home aquarium. These fish can be considered community fish, as long as you keep them properly. Below you will find an overview of some of the most popular freshwater aquarium bullies as well as tips for maintaining a peaceful community tank with these fish.

The red-tailed shark is a unique and attractive species of freshwater fish that many aquarium hobbyists say is not a good option for a community tank. As long as you are careful about what fish you keep the red-tailed shark with and provide plenty of space, however, they can coexist peacefully with other fish. The red-tailed shark grows up to 4 inches long and requires at least a 50-gallon tank. These fish are classified as semi-aggressive, but their aggression is only targeted toward other sharks (including its own species) – as long as they are the only shark in the tank, you shouldn’t have any trouble. 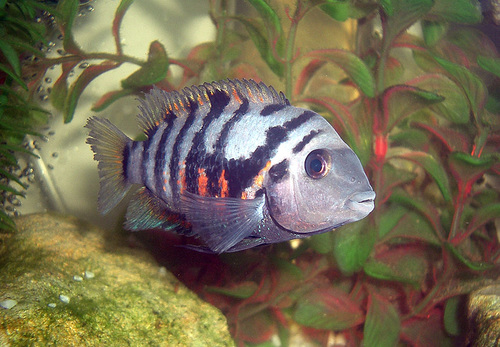 The convict cichlid is known for its striking appearance – it has a gray body with dark vertical stripes. These fish grow up to 6 inches long and require at least a 30-gallon tank. Convict cichlids are typically classified as aggressive but the problem really only occurs when they are breeding. These cichlids become incredibly territorial during breeding because they care for and raise their fry – if there are other fish in the tank, they will likely be considered a threat. A pair of convict cichlids can do perfectly fine in a tank on their own or a single convict cichlid in a community tank.

The blue gourami is also known as the three-spot gourami and it is a popular community fish. While most gouramis are very peaceful by nature, this species tends to be a little aggressive – but only around other gouramis. Blue gouramis are a little more territorial than other gouramis so it is not recommended that you keep them in the same tank with other gouramis, especially other males. It is also important to note that this species can grow up to 6 inches long so they require at least a 30-gallon tank for a young blue gourami and a 55-gallon tank for a full-grown specimen. 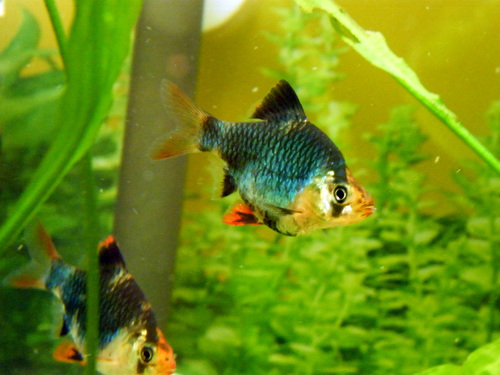 Tiger barbs are named for their orange-and-black coloration, but some aquarium hobbyists might say that their name fits with their personality as well. These fish are known for being fin nippers and they can get a little aggressive in the community tank unless you keep them properly. The key to keeping tiger barbs properly is to keep them in a group with at least 6 of their own species. As long as tiger barbs are able to shoal, their fin nipping and aggression will be targeted toward their group and not toward your other fish.

The key to maintaining harmony in your community tank is to ensure that the tank environment is clean and healthy. Not only do you need to make sure to provide your fish with enough space and adequate hiding places, but you need to pay close attention to water quality. If the water quality in your tank is not ideal, your fish will become stressed and they may start acting out as a result. To maintain high water quality in your tank you will need to perform routine maintenance tasks such as performing weekly water changes and changing your filter media once a month.


In addition to keeping your tank water clean, you should provide your fish with plenty of hiding places so they can escape from aggressive fish. Using a variety of decorations – some short, some tall – you can also break up sight lines in the tank which will help to reduce the aggression of freshwater bullies. Perhaps the most important thing you can do, however, is to provide a tank that is large enough to accommodate both your fish and their big personalities. The more you learn about your fish before you add them to the tank, the better off you will be – so do not skip your research!


comments powered by Disqus
PREVIOUS
ARTICLE
Freshwater Fish Article Database
Articles on dozens of different freshwater fish and appropriate care.
NEXT
ARTICLE
South American Cichlid Species for Beginners
Cichlids are not for everyone, however, and certain species can be quite challenging to keep.