THE BEST BARBS FOR A LARGE HOME AQUARIUM

Written by Kate Barrington Updated April 06, 2018
There are many different species of barbs but some of them are better than others for the larger home aquarium.
One of the benefits of keeping a large aquarium over a small aquarium is, of course, the fact that you can stock your tank with more and bigger fish. Many aquarium hobbyists ascribe to the “one inch of fish per gallon” rule which, though it is a little outdated and oversimplified, is a good rule of thumb to start with. Larger aquariums can accommodate larger fish and, for tanks 30 gallons and larger, barbs are a great group of fish to choose from when stocking your tank.


What Kind of Fish Are Barbs?
The fish known as barbs belong to the family Cyprinidae which they share with a number of other popular aquarium fish including rasboras, danios, and certain species of shark. Barbs are largely divided over two genera – Barbus and Puntius – though there are some exceptions. These are a type of ray-finned fish, so named because their fins consist of bony spines (called rays) which a fine webbing of skin stretched over them. Barbs come in a wide variety of different shapes and colors including the bright red Cherry Barb, the striped Tiger Barb, and the spotted Panda Barb. Each species of barb is unique in terms of its color and pattern, though all barbs share some common traits. 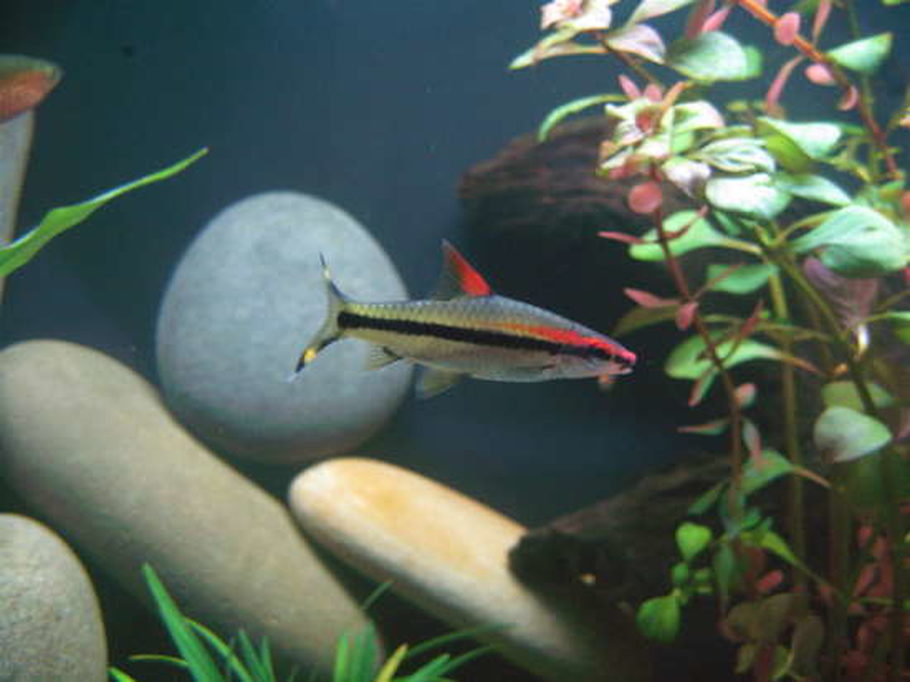 For the most part, barbs are fairly small, colorful, and active fish. Most barbs grow to a full size of 2 to 3 inches in length which means that they should be kept in an aquarium no smaller than 30 gallons. It is important to remember, however, that barbs are very active fish and they can become fairly territorial and aggressive. To minimize these kinds of problems, it is generally better to err on the side of caution and to keep your barbs in a larger rather than a smaller tank. While 30 gallons is the minimum recommended tank size for barbs, they will do much better if kept in large schools in a tank 75 gallons in capacity or larger.


Do Barbs Need Any Special Care?

One of the best things about barbs is that most species are fairly hardy in the home aquarium. While there may be slight differences from one species to another, most barbs do well in warm, slightly acidic water. Barbs generally prefer a temperature range between 74°F and 80°F with a pH between 6.0 and 7.0. When it comes to water hardness, barbs prefer softer water in the 4 to 10 KH range. Another thing you need to remember about barbs is that they prefer planted tanks. Many barbs are native to various Asian countries in rivers, streams, and canals but they have also been found in flooded fields and other swampy areas.


Another thing to remember about barbs is that they tend to be the most aggressive when they are kept individually. You can reduce the aggression of your barbs by keeping them in large schools with 6 or more of their own species. Keeping barbs in schools will also help to minimize the degree to which your barbs bully other fish in your tank. Having your tank decorated with plenty of plants and some larger decorations to break up sight lines will also help to minimize the aggression and territorial behavior of your barbs. Just be sure that you do not keep too many aggressive species in your tank – a school of barbs does best in a community tank with passive species of fish.


What are the Top Species of Barbs?

Barbs come in all shapes, colors, and sizes so choosing the right species for your tank can be a challenge. If you want to make the best use of your larger aquarium, however, you may want to consider some of the larger species of barbs. These fish should still be kept in schools with 6 or more of their own species and the size of your tank will determine whether or not you can keep other fish as well. Here are some of the most popular species of barbs to consider: 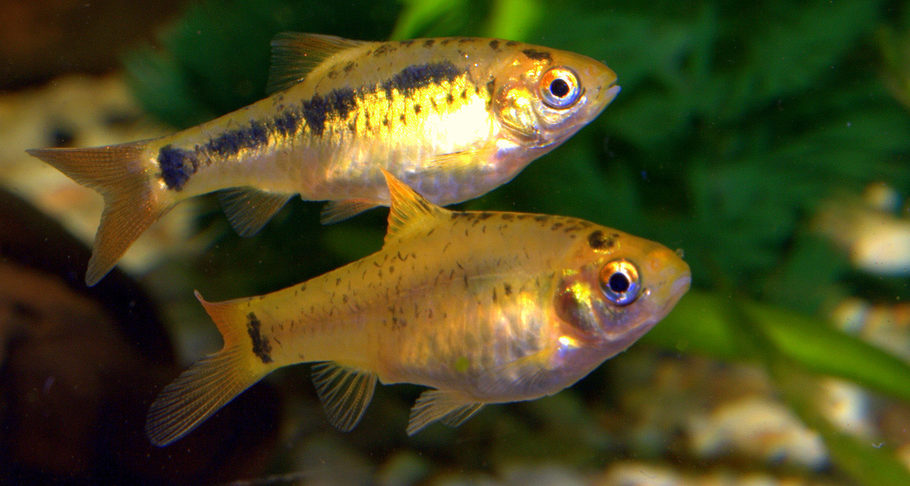 Tips for Keeping Barbs in Your Aquarium

Many species of barb are naturally colorful, but you can help to bring out the color of your barbs by feeding them a healthy diet. Barbs are generally not picky eaters, so feed your barbs a variety of healthy foods including high-quality commercial flakes and pellets supplemented with live and frozen foods. You should also offer your barbs fresh vegetables a few times a week. Your barbs might nibble on the plants in your tank as well, but they generally aren’t terribly destructive. Because many barbs are voracious eaters, you may need to keep an eye on the other fish in your tank to be sure they aren’t out-competed for food by your barbs.


If you have a large tank with plenty of space for new fish, you may want to consider adding a school of barbs. Not only are barbs some of the most colorful and active fish you will find for the freshwater aquarium, but each species is unique so you can choose the variety that suits your tank best.


comments powered by Disqus
PREVIOUS
ARTICLE
The Top Choices for Stocking a 10-Gallon Tank
Maintaining a thriving 10-gallon tank can be a challenge but it will help if you are careful about how you stock it.
NEXT
ARTICLE
The Top 5 Shrimp for the Freshwater Aquarium
Freshwater shrimp make an excellent addition to your cleanup crew - keep reading to learn more about the top 5 species!