WHAT IS DROPSY AND HOW DO I TREAT IT?

Written by Kate Barrington Updated April 06, 2018
When cultivating an aquarium, you are likely to run into a variety of freshwater aquarium fish diseases and conditions including dropsy. Learn how to treat and prevent these diseases so you can better protect your fish.
When it comes to keeping your aquarium fish healthy there are many aquarium fish diseases you need to be on guard against. It is not uncommon for new aquarium owners to be caught off guard by conditions like dropsy because they can pop up unexpectedly. Before you can treat your fish for dropsy, you must first learn what it is and what causes it. Often incorrectly referred to as a disease, dropsy is actually an internal bacterial infection that causes the bodies of aquarium fish to swell. Though dropsy in itself is not typically contagious, the conditions which lead to the contraction of dropsy can have negative effects on other fish in the tank if not remedied quickly. In this article you will learn the basics about what dropsy is, how it can be treated, and how to prevent it in the first place.


Symptoms of Dropsy in Fish


Dropsy is a condition that commonly affects goldfish and other freshwater aquarium fish -- the symptoms of this condition are fairly easy to recognize because they involve the swelling of the belly or, in some cases the whole body, of the fish. In addition to swelling, some of your fish's scales may begin to protrude from its body almost to the point where it looks like they might pop off. Fish that have dropsy are also likely to experience behavioral changes, becoming lethargic, hovering near the top of bottom of the aquarium rather than swimming around – affected fish may also lose their appetite. Some fish may even have sunken eyes or their eyes may begin to swell and bulge. 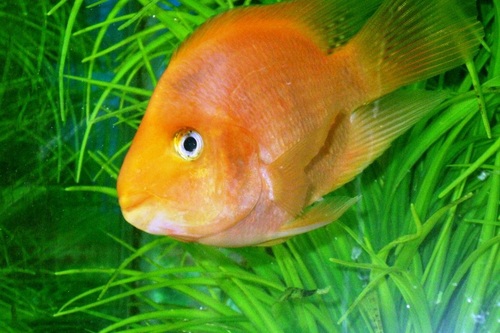 In most cases, dropsy is the result of a bacterial infection caused by bacteria Aeromonas. Aeromonas is a bacteria that is commonly found in most fish tanks but it is only like to infect fish that are stressed due to overcrowding or poor water quality. Dropsy can also affect fish that have poor kidney function, a condition which may result in the absorption of water into the body cavity which causes the stomach of the fish to swell. Although dropsy is not usually contagious, it is a good idea to isolate any sick fish from those that are healthy so you can treat the ill fish before returning them to the community tank.


If you suspect that one or more of your aquarium fish are suffering from dropsy, follow these steps to treat the condition:


1.     Isolate the sick fish in a hospital tank. To make water changes easier, this tank should be kept bare except for a filter and heater, if necessary. The temperature of the hospital tank should be as close to that of the original tank as possible.
2.     Create a salt bath by adding no more than 2.5 teaspoons of Epsom salt for every ten gallons of water in the hospital tank. The magnesium sulfate in the Epsom salts may help to draw the excess water out of the fish's body that caused it to swell.
3.     Feed your fish antibacterial fish food. You can either purchase prepared antibacterial fish food or make your own by creating a 1% mixture of fish food and an antibiotic like chloromycetin or tetracycline.
4.     Continue to feed your fish antibiotic fish food and monitor their progress for 7 to 10 days.
5.     If no improvement is seen after several days of treatment, treat the aquarium water with Maracyn Two. This medication is effective against bacterial infections and is absorbed through the skin of fish.
6.     If, after ten days of treatment, your fish shows no signs of improvement or if it becomes worse it may be that the cause of dropsy is not bacterial. If the antibiotics do not work and the salt bath is ineffective, there may be nothing else you can do for your fish.


To find out about other treatments for dropsy you can contact your local pet store and seek advice from the professionals there but dropsy is a notoriously difficult disease to cure and other treatments may be just as ineffective.


How to Prevent Dropsy


As is true of most tropical fish diseases, the best way to prevent dropsy is to maintain good water quality in your tank by staying on top of routine maintenance tasks. Perform routine weekly water changes in your fish tank; changing out between 10% and 20% of your aquarium's water volume. You should also perform a larger water change of 25% the tank volume once a month. It is also important to give your fish enough space in the aquarium - overcrowding can result in stress and illness. Avoid feeding your fish too much as well because uneaten fish food that sinks to the bottom of the tank will decompose and it may negatively affect water quality in the tank. 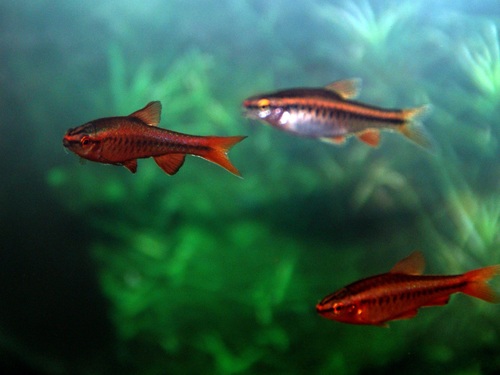 As you have already learned, stress is a key factor in the development of dropsy in fish. Unfortunately, your fish cannot communicate with you to let you know that something in the tank is causing them stress – it is up to you to learn and identify not only the potential causes of stress for your fish but also the behaviors they may exhibit as a reaction to that stress. Because stress plays a major role in whether or not your fish become sick when they are exposed to a pathogen, it is essential that you learn everything you can about it.


Below you will find a list of some of the most common factors contributing to stress in aquarium fish:


Below you will find a list of common symptoms of stress in fish:

Using the information provided above about risk factors for stress and the symptoms of stress in fish, you should have a better idea how to keep your freshwater fish healthy. It is not always easy to diagnose the symptoms of disease in fish, but if your fish become stressed it will be fairly obvious. As soon as you suspect that your fish are becoming stressed you need to do whatever it takes to remedy the situation before they get sick. Avoiding stress in the freshwater tank is the key to preventing many aquarium fish diseases including dropsy.


Unfortunately, dropsy is a condition which is often fatal in fish and it can be caused by many different things. The key to preventing dropsy is to keep your aquarium clean and as stress-free for your fish as possible. If your fish should happen to contract dropsy, take action as soon as possible to treat the disease. Even if you act quickly, however, there may be nothing you can do to save your fish. The best thing you can do is keep your tank clean in the hopes of preventing your fish from becoming sick at all.


comments powered by Disqus
PREVIOUS
ARTICLE
Behavioral Changes and Problems in Aquarium Fish
Unexpected behavioral changes are often a symptom of disease in aquarium fish.
NEXT
ARTICLE
Identifying and Treating the Most Common Cichlid Diseases
Cichlids are one of the largest families of freshwater fishes and they are prone to developing several aquarium fish diseases.

SEA URCHINS IN THE SALTWATER TANK
If you are looking for a unique invertebrate to add to your saltwater tank, consider the sea urchin.
SALINITY REQUIREMENTS IN A SALTWATER AQUARIUM
The key to maintaining a healthy saltwater aquarium is to strike the right balance in the salinity of your tank water.
SPOTLIGHT ON THE OTOCINCLUS CATFISH
Also known as oto cats, otocinclus catfish are some of the smallest aquarium fish out there and also some of the best algae eaters.