Written by Kate Barrington Updated April 06, 2018
Learn how to succesfully breed mouth brooding African Cichlids.
Cichlids are one of the largest family of freshwater fishes, containing over 2,000 different species. Not only are these fish colorful and entertaining, but they are also relatively easy to breed in captivity – some breed readily with little to no effort on the part of the aquarium hobbyist! Breeding cichlids can be both entertaining and educational due to their unique breeding practices -- mouth-brooding varieties are especially interesting as their process of spawning is so unusual. Typical mouth brooders include yellow labs, red zebras, yellow-tailed acei, and other Lake Malawi cichlids. While most mouth brooders are found in Lake Malawi, some are found in Lake Tanganyika and Lake Victoria as well. This article will discuss the overall process of mouth brooding and will offer several suggestions to successfully hatching African cichlid fry.


What is Mouth Brooding?
Mouth brooding refers to the fact that the female incubates her eggs in her mouth. After the female releases the eggs and the male fertilizes them, she gathers them carefully in her mouth. The eggs will remain inside the female’s mouth until they hatch into fry. Additionally, the female will allow the fry to enter and exit her mouth for a period of time after they hatch due to protective concerns. However, once they reach a certain size, the female stops letting them enter her mouth.


The Courting Process
The courting process may vary slightly for different species but it is very similar in most species of mouth-brooding cichlid. Typically, the male cichlid will be relentless during the courting process -- he will consistently chase the females around the tank. He will also attempt to lure the female back to a flat rock or sandy spawning area he has dug out by shaking his entire body in a seizure-like fashion. If the female ignores his behavior, she is chased away. If she accepts it, then they proceed to the spawning area.


After the mating, the female will have a mouthful of fertilized eggs. Her jaw will look very bloated and it is easy to tell that she is holding (the term used to describe the process of a female carrying her eggs in her mouth). 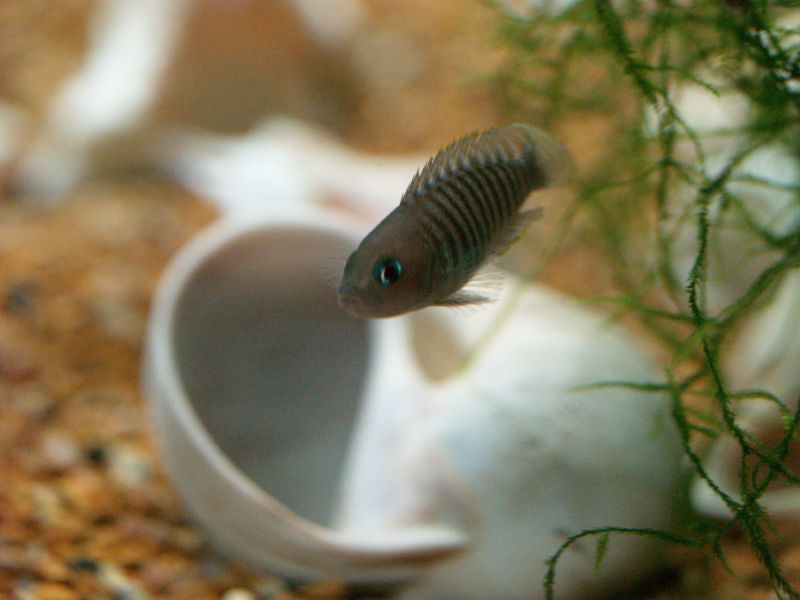 
After the Courting
Once the mating process is complete, the male will continue to constantly harass the female -- this is a good time to remove the female to a separate tank because the male is no longer necessary. Please refer to the article on general breeding for advice on setting up a fry tank. It will work the same for mouth-brooders only instead of just putting the fry in this new tank, you will remove the female and put her in there as well.


Separating the female serves several purposes. Firstly, it allows the female to get away from the harassing male. Secondly, it ensures that the fry will not be released into the main tank where they could be eaten. Lastly, it allows you to keep the female secluded for a week or so after she releases the fry. This is important because she will not eat while holding the eggs in her mouth. Therefore, she may go 3-4 weeks with no food and will obviously become very weak during this time. This extra week of seclusion allows her to regain her strength before being reintroduced into the main tank.


It is usually a good idea to provide a couple of flakes every once in a while to the separated female. She will sometimes eat these flakes if they are small enough that she can do so without swallowing her fry. Typically, drop the flake in there and give her a little while to eat it. If she does not eat it, take the food out so it does not cloud the water. Also, she may eat some flakes during the last week of keeping the fry in her mouth. Some people have speculated that she is actually feeding the fry with these flakes.


If you do not remove the female, she will often go into hiding. If you do not see a fish during feeding time for several days, it may be that she is hiding down in the rock work. As stated previously, she will not eat while holding the eggs so do not expect her to come out during feeding.


The female will typically wait 3-4 weeks before allowing the fry to become free swimming. She may allow them to re-enter her mouth if they are threatened, but eventually they will be on their own.


Aggression Issues
African cichlids tend to be very aggressive, especially mating dominant males. If you have cichlids, you probably will notice that one male in each species will become dominant and will wreak havoc on the other males and females. This behavior becomes intensified during the mating process -- I have often seen a male cichlid that usually only bothered his own species start chasing anything and everything in the tank when he knew a female was ready to lay her eggs. If you start to see your male go crazy, it may very well be that he is getting ready to mate.


It is also important to generally provide 3-4 females per male. This forces the male to spread his aggression and chasing around, thus allowing the other females some rest. If you put a 1:1 ratio of male to female African cichlids in your tank, that one female will be chased nonstop and will eventually die.


Stripping
A popular method for getting the female to release the fry early is called stripping. This is used by breeders in order to ensure the fry are not released into the main tank and in order to force the female to not become so weak. However, stripping can be quite stressful to a female as you are catching her, forcing her jaw open, and then dipping her in and out of the water so the fry can swim out. In general, letting the female go to term is the best choice.

Advice for Getting Your African Cichlids to Mate
The first thing you need to do before mating your cichlids is to ensure that your cichlids have reached sexual maturity. If the females are not big enough, it does not matter how much the male shakes, she is not going to mate with him. If, however, your females are big enough, there are several things you can do to entice them to mate.


● Mouth brooders typically mate on a flat, clean rock. Therefore, it is imperative that you provide them will several of these. They also prefer them to be in secluded areas of the tank so try to match this condition as well.


● Many cichlids cannot resist mating after a water change. Lower the water and let the filter splash into it for 30-45 minutes. Then refill the aquarium will water that is slightly cooler than the tank water (2-3 degree F). This simulates a rain and your cichlids will often start mating right away.


● Provide them with somewhat clean water. While cichlids tend not to be too picky (i.e. they have a very wide range of pH and other parameters they will mate in), they do need relatively clean water. Therefore, keep your aquarium clean with regular water changes and vacuuming.


Conclusion
Mouth brooding African cichlids are fascinating to watch -- the extreme care the mother gives to her fry is nothing short of noble and her dedication in most cases is quite a spectacle. Even if you don’t have to do much to entice your cichlids to mate, you may feel a sense of pride upon the release of your female’s first batch of fry. Even though the process is exciting, it can be a little tricky -- many new moms may swallow their fry on accident. Do not be discouraged -- after several attempts, most will catch on. Also the typical size for the first couple of hatching is 8-10, but with maturity, the female will soon start having 30 or so fry per hatching.

To read information on feeding your fry, refer to the general breeding article located on this website.


comments powered by Disqus
PREVIOUS
ARTICLE
Breeding Freshwater Fish
Learn how to succesfully breed freshwater fish.
NEXT
ARTICLE
Breeding the Two Kinds of Betta Fish
You may be aware that there are over 30 species of betta fish in existence but did you know that these species can be divided by their breeding habits?

WHAT ARE GLOFISH AND HOW DO YOU CARE FOR THEM?
If you've ever seen those fluorescent fish at your local pet store and wondered what they are, you'll learn everything you want to know in this article.
TIPS FOR AQUASCAPING A TANK FOR LARGE FRESHWATER FISH
Keeping large species of freshwater fish in a community tank can be challenging but, with proper planning, you can be successful.
AQUARIUM FISH NEWS: BILL INTRODUCED TO LIMIT AQUARIUM FISH COLLECTING
The saltwater aquarium industry takes millions of fish from oceans around the world each year.