SPOTLIGHT ON THE APPLE SNAIL

Written by Kate Barrington Updated August 17, 2022
Also known as the mystery snail, apple snails are a popular addition to the freshwater tank. Read on to learn more about common species and their care.

Keeping the water quality in your aquarium is one of your most important responsibilities as an aquarium hobbyist. Your fish require clean, clear water and that means removing detritus from the tank before it can negatively affect your water quality. Rather than performing daily water changes, consider adding a cleanup crew to your tank to do the work for you – apple snails are a great choice.

In this article, we’ll take a closer look at the apple snail and its role in the home aquarium. We’ll explore some of the more popular species and provide tips for how to care for them.

The Basics About Apple Snails

The apple snail is the largest freshwater snail species and a popular addition to the home aquarium. Unlike pond snails which are a nuisance, apple snails are welcomed by aquarium hobbyists for their scavenging habits. Often included in an aquarium cleanup crew, apple snails feed on algae and other detritus in the aquarium, helping to keep the tank clean.

Though apple snail is the most common name, these freshwater snails are also known as mystery snails. They belong to the family Ampullariidae in the class Gastropoda. The snails in this family are unique because they have a lung and a gill, so their mantle cavity is divided to separate these two respiratory structures. To put it more simply, apple snails have unique anatomical adaptations which allows them to be amphibious – they can live both on land and in water.

Apple snails have the potential to grow fairly large, at least 1 inch in diameter. As such, they are best suited to large aquariums where they have a wide area to graze. Keep in mind that these snails will eat live plants, so do not use them in planted tanks (unless it is a heavily planted tank) or be sure to provide supplemental food for your snails. 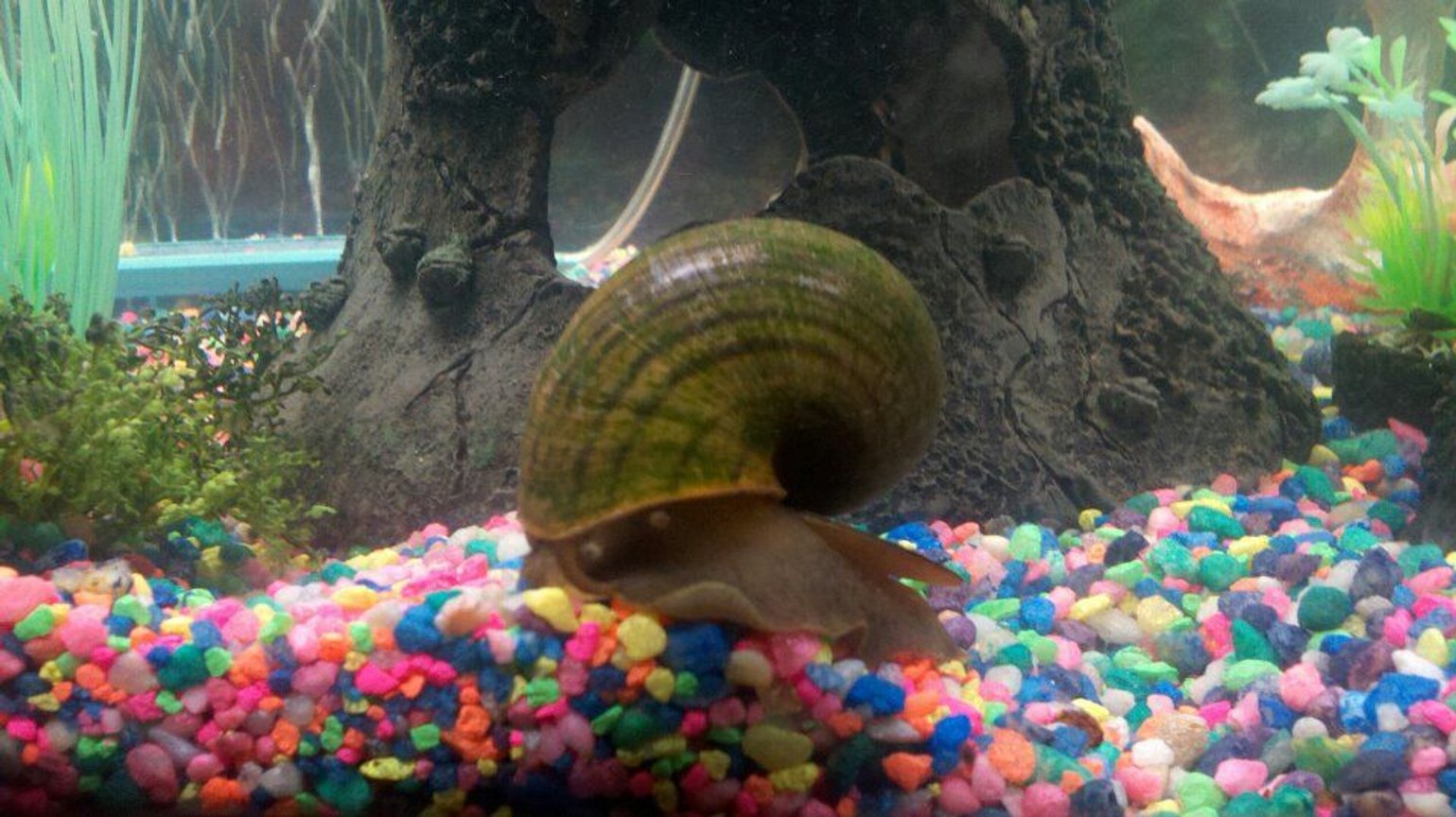 The Top 5 Most Popular Species

When you see apple snails in the aquarium section of the pet store, it is most likely the species Pomacea bridgesii, also known as Pomacea diffusa, or the spike-topped apple snail. When shopping for aquarium snails, it is best to select specimens that are either moving or attached to a surface – never buy a snail with a cracked or damaged shell.

Here is a quick overview of some of the most popular species of apple snail:

One thing to keep in mind about apple snails is that it can be tricky to tell the difference between the species. Many apple snail species exhibit similar coloration and patterns, and many come in gold and albino variations on top of their normal coloration. Look for clues in the shape of the shell, the size of the snail, and the pattern of stripes or bands to tell the difference.

If you plan to keep more than one apple snail in the same tank, you’ll need to make sure you have a large enough tank. Most apple snails are peaceful species, but they do require a lot of grazing area otherwise they might starve or fail to thrive. 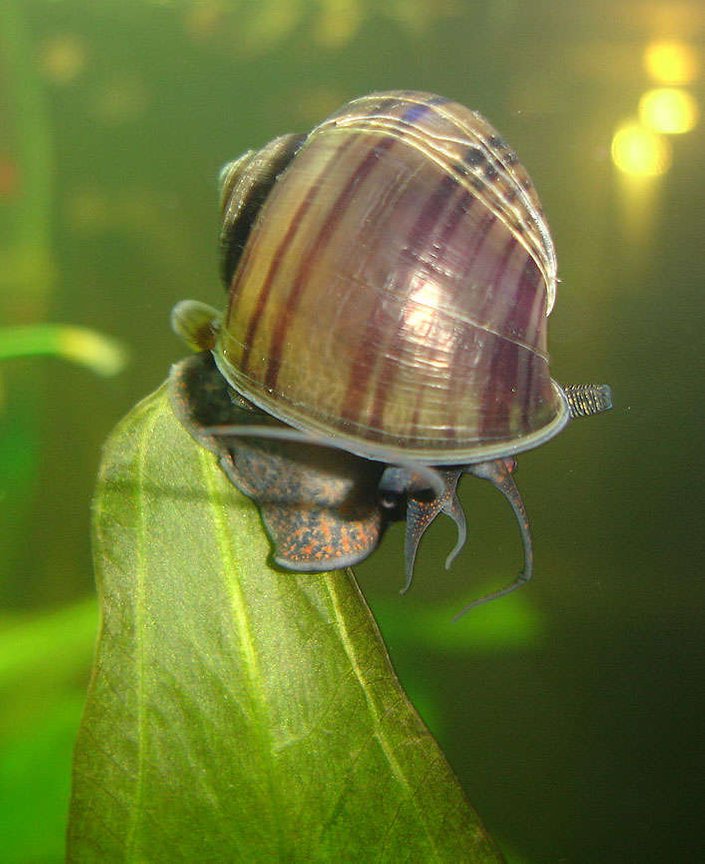 Tips for Caring for Apple Snails

As is true for any aquarium inhabitant, apple snails have specific requirements for care. We’ve already talked about the importance of providing your snail with ample space to graze, but you also need to consider some tank parameters:

With the right tank parameters and enough food, your apple snails should thrive. In the wild, these snails feed on dead and rotting plants but in the home aquarium, they are more likely to consume algae as well as detritus. It will benefit your snails to keep a few live plants in the tank, though you should know that they will become a food source. Live plants shed as they grow, and these fallen leaves become an excellent source of food for apple snails.

The best way to develop a tank for apple snails is to cultivate a wide variety of plants. Java moss, java fern, and hornwort are excellent options because they grow quickly and are very hardy. You may also want to include driftwood in your tank for the snails to feed from, keeping the water level just low enough that parts of the driftwood are out of water. Make sure to keep a tight lid on your tank, however, because these snails can and will live out of the water. 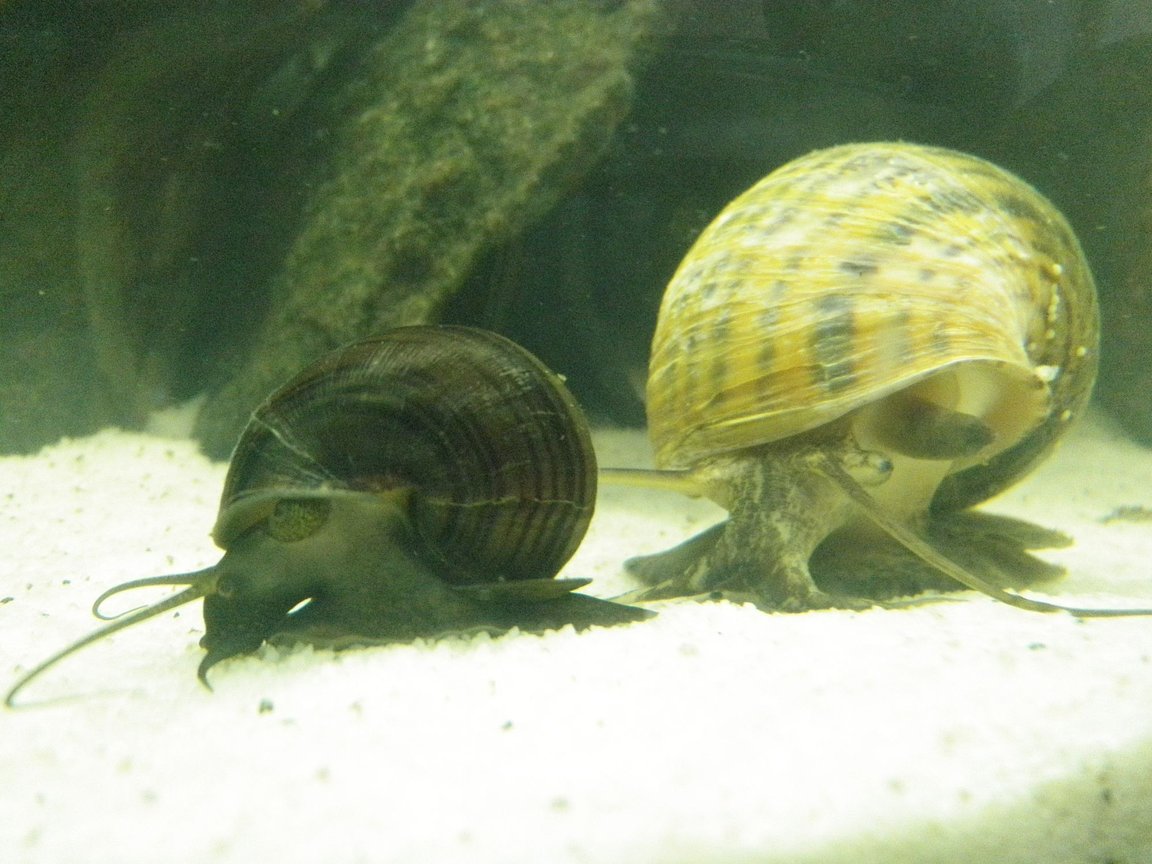 If you have a large enough tank to accommodate them (or several tanks), you might think about breeding your apple snails. In order to do so, you’ll need a male and a female. When kept in the same tank together, these two apple snails should mate without much help.

When the female apple snail is ready to lay her eggs, she will do so at or above the surface of the water. Apple snails deposit their eggs in a cocoon which makes them easy to spot – if you don’t want your tank to become overrun with apple snails, simply remove the eggs. If you do want to hatch them, keep the air around them moist (if they are deposited above the water) and expect them to hatch in about a month. Once they do, the baby snails will fall to the bottom of the tank and start feeding.

To encourage your snails to breed, you can try lowering the water level by a few inches, so they have room to lay their eggs. Providing plenty of food and a higher water temperature might help as well. Also remember that apple snails can grow very quickly if they have enough food, so keep an eye on your snails to make sure they don’t overpopulate the tank.

Are Apple Snails Right for Your Tank?

Apple snails make a great addition to the freshwater tank, especially if you are looking for an inhabitant that will help keep things clean. Just make sure you have enough space and vegetation in your tank to support your snails and keep the conditions in your tank clean and properly balanced. Good luck!

comments powered by Disqus
PREVIOUS
ARTICLE
What Are the Best Cichlids for a Community Tank?
Cichlids are some of the most beautiful fish in the world, but they can also be the most aggressive.
NEXT
ARTICLE
Spotlight on the Otocinclus Catfish
Also known as oto cats, otocinclus catfish are some of the smallest aquarium fish out there and also some of the best algae eaters.