THE BASICS OF BREEDING BALA SHARKS

Written by Kate Barrington Updated March 09, 2014
Bala sharks are a very popular species of aquarium fish. Read more to learn how to breed them yourself.
Bala sharks are a very popular species among tropical fish enthusiasts, but many aquarium owners do not realize just how large these fish can get. In the pet store, Bala sharks are sold when they are very young and only measure one or two inches. At maturity, however, the Bala shark has the capacity to grow up to 12 or 14 inches in length. The Bala shark does not even reach sexual maturity until it is around four inches (10 or 15 cm) in size, so Bala shark breeding can be difficult for the average aquarium enthusiast. If you are interested in breeding your Bala sharks, you may want to learn the basics about breeding requirements for this species first.


About Bala Sharks
Also known as the silver shark, Bala sharks are not actually a species of shark - they are a species of freshwater fish whose sleek body shapes resembles that of a shark. These fish generally have slender, silver-colored bodies with black-tipped fins, and they belong to the same family as danios, carps, and minnows. Bala sharks are a hardy variety of tropical fish, which makes them popular among aquarium enthusiasts, but they do require a great deal of space as they grow larger. 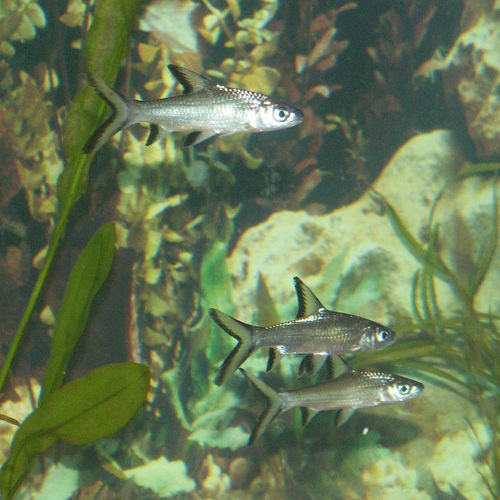 A mature Bala shark can grow up to 14 inches in length so they require very large tanks -- it is recommended that they be kept in an aquarium no smaller than 70 gallons in capacity. If you plan to keep several bala sharks, or keep them with other fish, you may want to go with a 100-gallon tank just to be safe. Even though they can grow to be quite large, the Bala shark is a docile species that does well in a community tank, even with smaller species like danios and tetras. These fish enjoy a tank decorated with live plants, but it is also recommended that you leave open areas for free swimming.


Bala Shark Breeding Requirements
Unlike some species of fish, like guppies, that are able to mate when they are still quite young, the Bala shark does not reach sexual maturity until it is around 4 inches (between 10 and 15 cm), in size. It is very difficult to tell a male from a female Bala shark so it is generally a good idea to purchase five or six of them from the pet store and to observe them for signs of mating behavior. Male Bala sharks tend to grow a little larger than females, and the female is said to have a slightly more rounded abdomen. It may take some time and practice for you to be able to tell a male from a female Bala shark – you may also be able to ask an experienced breeder or the professionals at the aquarium supply store for advice.


To make preparations for Bala shark breeding, set up a separate 55 gallon or larger breeding tank, and keep it at a temperature between 72 and 82 degrees Fahrenheit. Do not crowd the breeding tank with plants but place some around the outside of the tank and a few in the center to provide hiding places for the fish while also allowing for free swimming space. If you plan to use the breeding tank to raise the fry once they are hatched, you may want to keep the bottom of the tank bare. A bare-bottomed tank is easier to clean and it will also make your fry more visible. To keep the water in the tank clean, install a sponge filter in one corner of the tank. A sponge filter provides basic mechanical filtration as well as biological filtration without creating enough suction to put newly hatched fry in danger.


Bala Shark Mating Process
It has not been scientifically proven that the "dance" ,male and female Bala sharks have been known to exhibit is directly linked to the mating process, but breeders of Bala sharks have made the connection between the occurrence of this dance and the imminent production of eggs. After producing eggs, the female will scatter them around the tank for the male to fertilize externally. To facilitate this type of external fertilization, it is important to have adequate filtration in place in your breeding tank, to provide a current that will spread the male Bala shark's sperm to all of the eggs laid by the female.


Once the eggs have been laid and fertilized, the male and female Bala sharks pay no further attention to them. In the wild, Bala sharks travel to separate breeding grounds to spawn, and they do not provide any protection for their own young. Bala sharks are prone to eat the eggs and newly hatched fry, however, so you may want to move the fry to a different tank after hatching or simply remove the mature Bala sharks from the tank. In order to protect the Bala shark fry, you will need to keep an eye on the breeding process so you can remove the adults as soon as they are finished spawning. 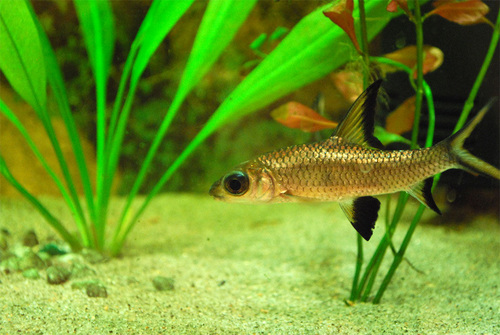 After hatching, feed the fry a varied diet of fine foods like newly hatched brine shrimp and commercial fry food. They will grow quickly at first and you may soon find it necessary to split them among several tanks or to raise them in an indoor pool where they can have adequate space to thrive. Ideally, you should feed the baby fish small amounts of food several times a day rather than a large amount once or twice. If you feed the fish too much at once, all of the uneaten food will simply sink to the bottom of the tank and accumulate – eventually this could lead to a decrease in water quality in your tank.


Breeding Bala sharks is not easily accomplished by the average aquarium owner, because these fish require so much more space than the average aquarium enthusiast is able to provide. Professional breeders are able to create environments specifically designed to cater to the needs of Bala sharks. If successfully cared for and bred, however, these fish are a joy to keep. They can even be quite useful in the aquarium by "predicting" outbreaks of ich. Bala sharks have been known to rub their scales against rocks in the aquarium prior to an outbreak of ich.


Keeping Bala sharks in the home aquarium can be a challenge due to their space requirements. For the aquarium hobbyist who can provide the space these fish need, however, they can be a delight to keep. If you are looking for a delightful, docile fish for your community tank and if you have adequate space available, the Bala shark is an excellent choice. These fish are also a good specimen to breed, as long as you are able to provide for their basic needs.

comments powered by Disqus
PREVIOUS
ARTICLE
Tips for Breeding Silver Dollar Fish
Silver dollar fish are a great addition to the community tank and breeding them can be a fun challenge.
NEXT
ARTICLE
Tips for Breeding Gouramis in the Home Aquarium
Gouramis are some of the best community fish around because they are peaceful, hardy, and lovely to boot.