SPOTLIGHT ON THE WOLF CICHLID

Written by Kate Barrington Updated May 26, 2022
The wolf cichlid is a large, aggressive species but makes a perfect option for a show tank. Read on to learn more about these big, beautiful fish.

For many aquarium hobbyists, cultivating a thriving tank is a personal challenge. You’re always looking for ways to make your tank look more striking or for opportunities to test your skills. If you’re looking for a new challenge, consider the wolf cichlid.

The wolf cichlid is a large species of cichlid native to Central America that grows to an impressive length of 28 inches. This carnivorous fish is commercially significant in its native land but, in the home aquarium, can be a sight to behold. Here’s what you need to know about this unique species.

Basics on the Wolf Cichlid

Also known as the rainbow bass or guapote, the wolf cichlid is a Central American species that can be found on the slopes of Honduras, Nicaragua, and Costa Rica. These carnivorous fish are highly sought after as game fish and they are important to local fisheries because they are relatively easy to breed.

Here are some important pieces of information about this species:

The wolf cichlid is a large, deep-bodied fish that grows up to 28 inches in length. Mature males of the species develop a rich golden yellow to silver-colored body with speckles of blue, black, and purple. Many specimens exhibit green or red coloration on the head and the base of the dorsal fin with blue-green coloration on the fins and tail. Females of the species are almost always yellow. 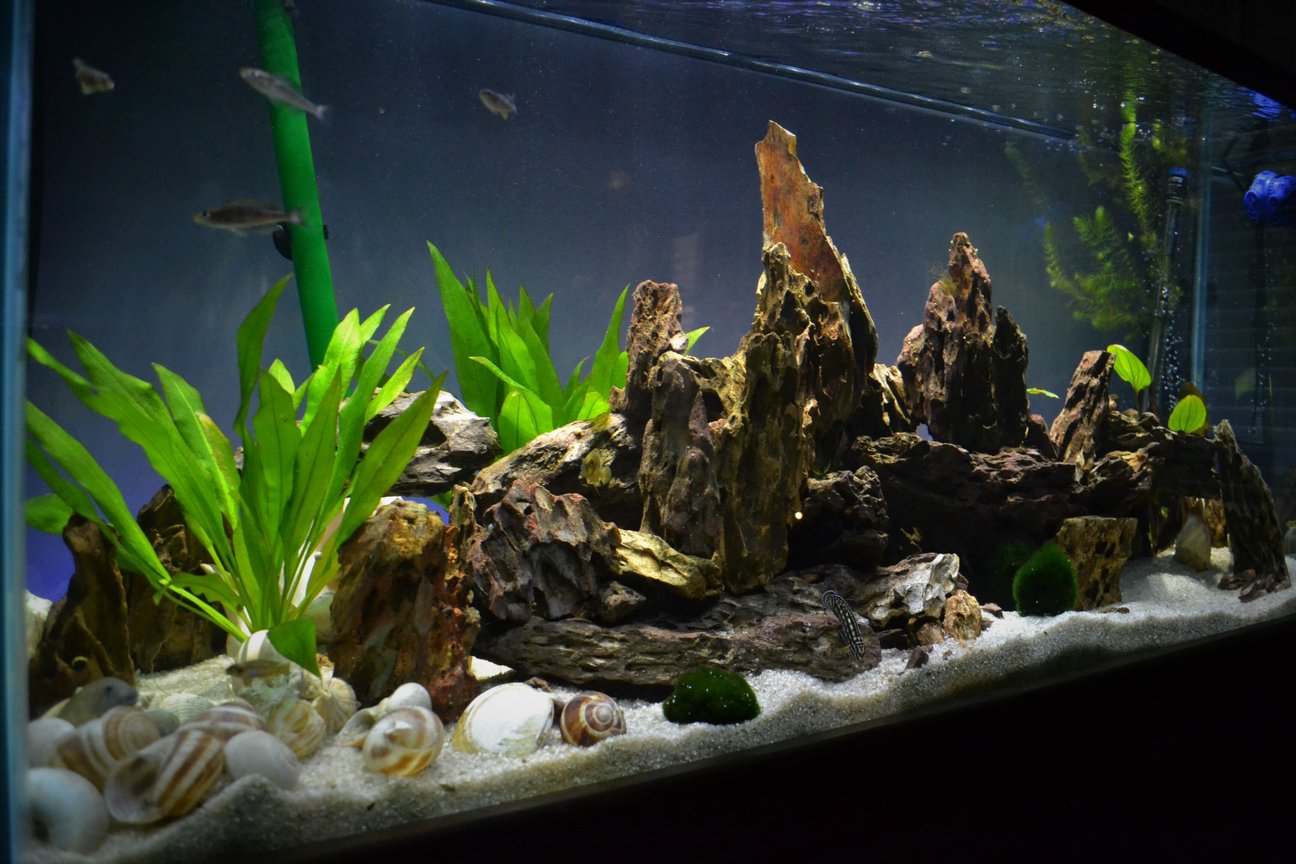 Because the wolf cichlid grows to a mature size up to 28 inches, this species requires a significant amount of space. A minimum of 100 gallons is recommended, though 120 gallons is better. Be sure to provide plenty of open swimming space, but this species also appreciates having rock caves to hide in and other décor to populate its territory.

Wolf cichlids prefer a sandy substrate similar to their native habitat with plenty of large rocks and rock structures. You can also provide some smaller rocks for your wolf cichlid to play with.

Though wolf cichlids are large, aggressive fish, they are not particularly difficult to care for. A hardy species, these fish can tolerate a wide range of pH and water hardness levels as long as it is kept stable. Just be careful when cleaning out or redecorating the tank as these fish have been known to become aggressive with their caretakers. Providing your fish with an adequate diet can help prevent issues.

In terms of diet, the wolf cichlid is a strict carnivore that feeds primarily on smaller fish, insects, and crustaceans in the wild. Provide your wolf cichlid with a varied diet of pellet foods, fresh foods, and frozen foods including feeder fish, shrimp, and earthworms. Feed your wolf cichlid several small meals a day, taking an occasional break of a day or two from time to time.

Not only is the wolf cichlid very large, but it’s a very aggressive species as well. It’s imperative that you provide this species with ample room and avoid housing it with smaller, more docile species. Because the wolf cichlid is territorial and carnivorous, it will likely eat anything smaller that comes across its path.

Most aquarium hobbyists choose not to house their wolf cichlids with other fish except as a male/female pair. You may be able to keep this species with other fish, but only in an extremely large tank with several divided territories. Wolf cichlids have been known to display enhanced aggression in breeding mode, so even housing a male and a female together can be risky. 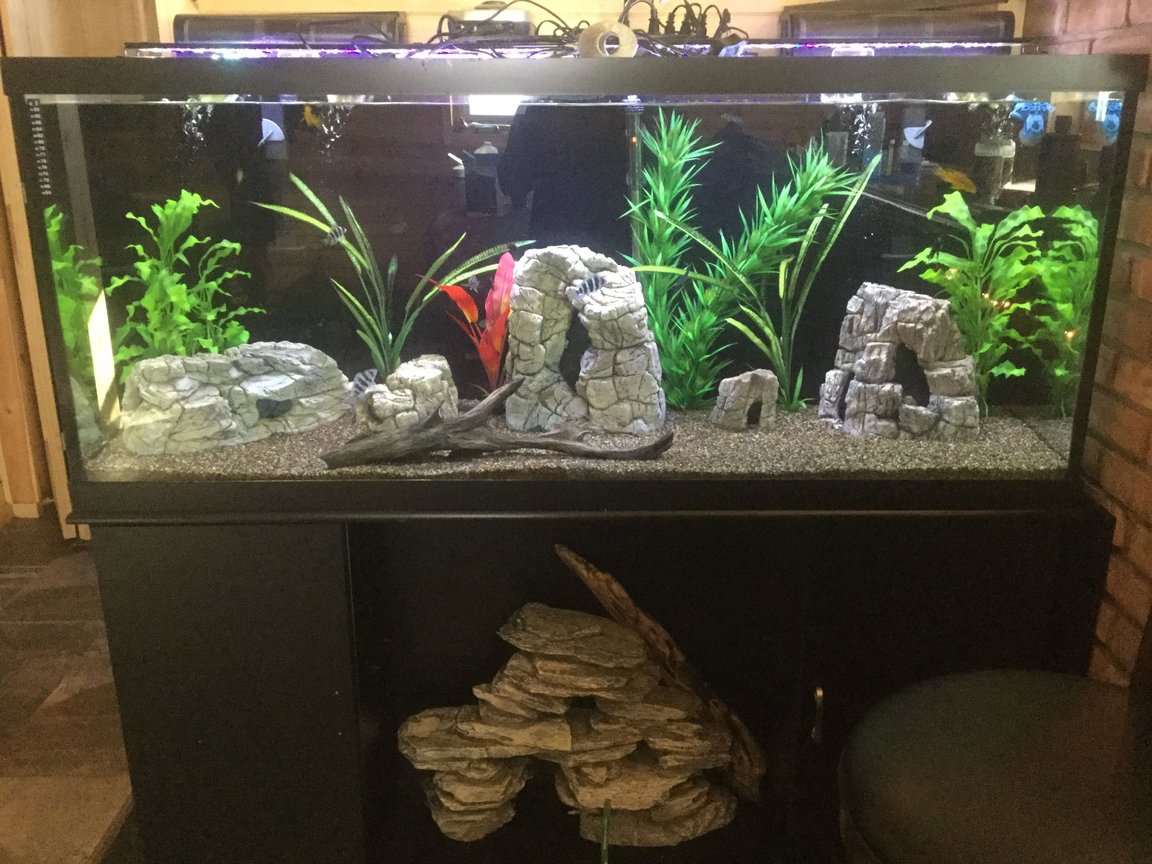 Wolf cichlids are by no means community fish, so you shouldn’t expect to keep yours with other fish. The only possible exception is keeping a male and female pair, though even that can be difficult without a very large tank. With adequate space, however, breeding wolf cichlids is fairly straightforward.

The wolf cichlid is a substrate spawner and, like many cichlids, the parents care for their young after hatching. If you’re planning to breed wolf cichlids, your best bet may be to start with a group of 6 to 8 juveniles and let them form pairs naturally. At that point, you’ll need to separate them into their own tanks – you may even need to use a tank divider to separate the male and female at times.

Female wolf cichlids tend to be smaller than males and almost entirely gold or yellow in color – especially during courtship. Male wolf cichlids have more elongated dorsal and ventral fins along with brighter blue coloration. During courtship, the female will exhibit a small tube slightly extending from her bottom which shows she’s ready to lay eggs. Female wolf cichlids lay up to 1,000 orange-colored eggs, usually on a flat surface, and the male will make several passes to fertilize them.

Both male and female wolf cichlids guard their fry ferociously until they hatch, usually after 5 to 7 days. The newly hatched fry may be transported to pre-dug pits by the parents where they will be guarded until they become free swimming after about 7 days. If you plan to rear the fry, you should remove them from the tank at this point, so the parents don’t eat them. Wolf cichlid fry can be raised on baby brine shrimp until they’re large enough to accept daphnia and small bloodworms.

Other Tips for Wolf Cichlid Care

Wolf cichlids are anything but boring, but they aren’t the perfect pick for every aquarium hobbyist. They could be a good choice if you have adequate tank space (ideally a separate tank) and you’re experienced with caring for carnivorous species of fish.

Here are some additional tips for wolf cichlid care:

As large and aggressive as wolf cichlids are, they are relatively easy to care for and can be a joy to keep. They are easily bred, and their striking appearance makes them perfect for a show tank. Take what you’ve learned here and put it to use in your own wolf cichlid tank.

comments powered by Disqus
PREVIOUS
ARTICLE
The 15 Most Popular Types of Goldfish
Popular as prizes at carnivals and state fairs, goldfish are known for their orange-gold coloration, but they actually come in many colors and patterns.
NEXT
ARTICLE
Breeding Freshwater Fish
Learn how to succesfully breed freshwater fish.

THE 15 MOST POPULAR TYPES OF GOLDFISH
Popular as prizes at carnivals and state fairs, goldfish are known for their orange-gold coloration, but they actually come in many colors and patterns.
SPOTLIGHT ON THE WOLF CICHLID
The wolf cichlid is a large, aggressive species but makes a perfect option for a show tank.
TIPS FOR KEEPING SHOALING SPECIES IN THE AQUARIUM
Nothing makes an aquarium stand out like a large shoal of colorful fish.