SPOTLIGHT ON THE OTOCINCLUS CATFISH

Written by Kate Barrington Updated September 24, 2021
Also known as oto cats, otocinclus catfish are some of the smallest aquarium fish out there and also some of the best algae eaters. Read on to learn more about them!

You may know of them as oto cats, but the full name is Ocotinclus. Otocinclus are a genus of catfish native to South America and some species are quite common in the aquarium hobby. These catfish are known for eating algae and for being much smaller than some of the other more popular algae-eating species of fish. They are, however, a little bit tricky to keep.

The otocinclus may be small, but it is a powerful algae eater and an all-around friendly addition to the community tank. Read on to learn more about this small but mighty species.

Basic Facts on the Ocotinclus

The name Otocinclus applies to an entire genus of catfish belonging to the family Loricariidae. These fish are native to South America where they are commonly found in small to medium-sized streams with moderate water flow. They tend to spend their time in areas of marginal vegetation, particularly among grasses with plants with small leaves, but can also be seen in shoals swimming in open water.

Scientists have identified around 20 species of Ocotinclus, though some are more common in the aquarium trade than others. Here is a list of those species:

Otocinclus catfish are also known as oto cats, though some species have their own names. Two of the most common species in the aquarium trade are Otocinclus vittatus and Otocinclus macrospilus. Otocinclus cocama is known as the zebra oto, Otocinclus affinis as the golden oto, and Otocinclus mariae as the dwarf oto. Most species look very similar with the only minor differences being tail markings.

Generally speaking, oto cats remain very small, topping out around 2 inches in adulthood. Most species have a muted gray or brown coloration, often with a dark horizontal stripe running the length of the body. Like most algae eaters, these fish have sucker mouths and they also possess unique biological adaptations that enable them to breathe air. 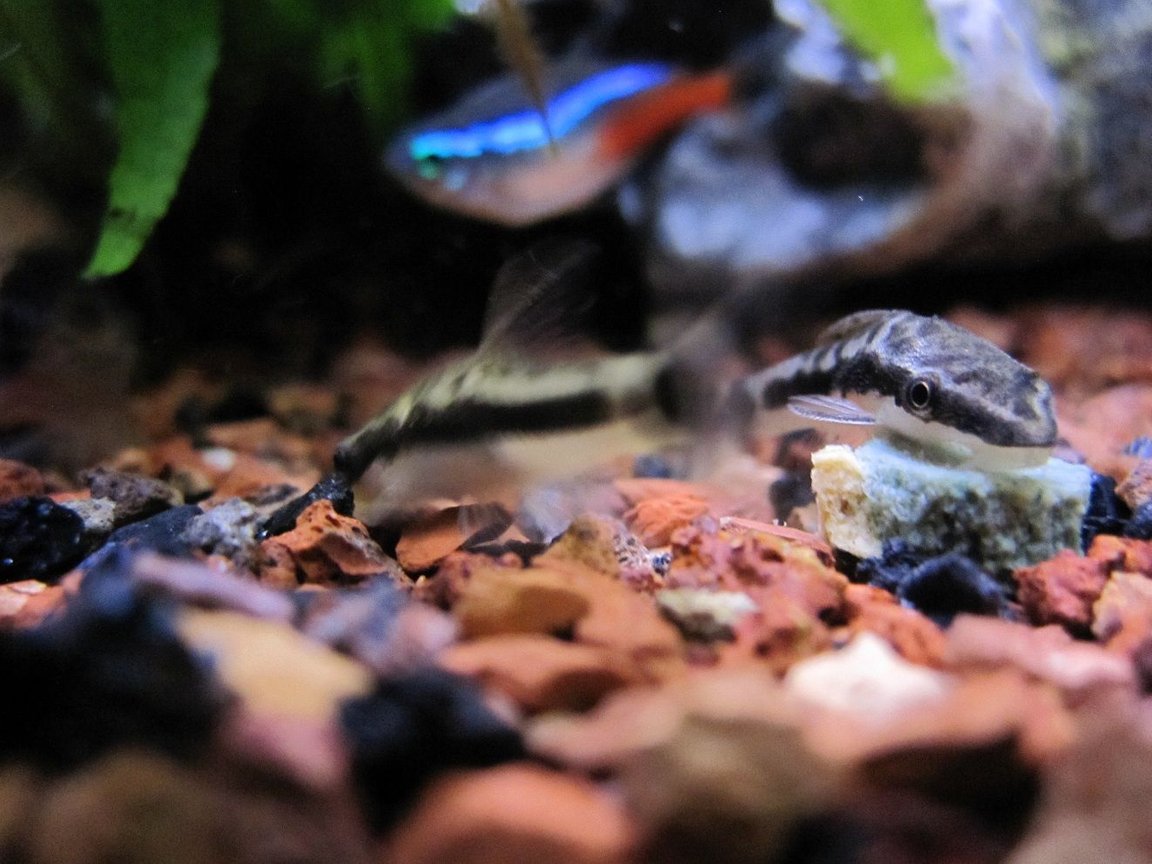 The otocinclus catfish is very difficult to breed in the wild, so many specimens available in the aquarium industry are wild caught. This may contribute to the fact that they can be somewhat tricky to care for. However, this is more likely due to the fact that they are very small, so even minute changes in water quality and tank parameters can be significant.

The best tank environment for otocinclus catfish is a planted tank with low stocking density and high water quality. These fish do best in very clean water with no measurable ammonia or nitrite and very low nitrate levels (0 to 20ppm). Water chemistry is less critical, though they tend to prefer a neutral to slightly acidic pH and slightly soft water with an ideal temperature of 72°F to 82°F.

Because oto cats are so sensitive to water quality, you should plan to perform weekly water changes of 25% to 30% your tank volume. Oto cats don’t tend to feed on detritus, so be sure to use a gravel vacuum when performing water changes. You’ll also want to install a powerful filtration system and make sure the tank runs for at least 2 weeks to cycle before you add your otocinclus. Ideally, your filtration system should be capable of turning over the aquarium volume at least three times per hour.

When it comes to feeding your otocinclus, remember that algae will make up the majority of their diet. Keep in mind, however, that these fish have very small teeth and they have trouble breaking down plant tissues. Once your oto cat eats all of the algae in the tank, you’ll need to feed it something else. Wild-caught otocinclus can be a little picky, but many enjoy a variety of commercial and frozen foods including sinking tablets, algae wafers, and blanched vegetables like spinach and zucchini.

Pros and Cons for Otocinclus

Now that you know a little bit more about these tiny algae eaters, you may be wondering whether the good things outweigh the bad. All aquarium fish species have their benefits and drawbacks, so consider the pros and cons of otocinclus catfish before you add one to your tank:

Whether the pros outweigh the cons depends on your aquarium setup. If you have an established planted tank with a low stocking density and you’re simply looking for an algae eater, the otocinclus could be the perfect choice. If you have a fully stocked tank with large or aggressive fish, the oto cat may not be the ideal choice for you. Read on to learn about recommended tank mates for otocinclus. 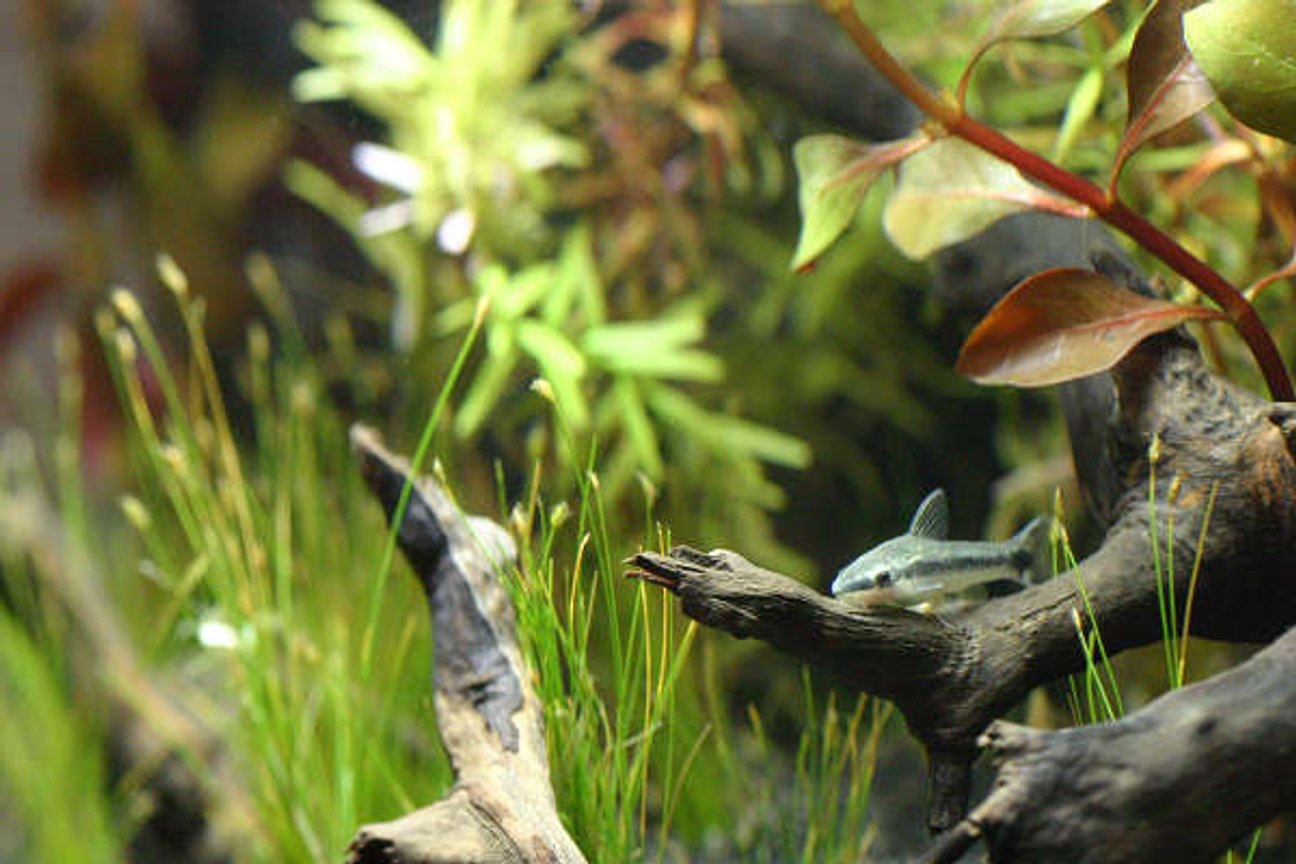 Otocinclus catfish are very docile and peaceful by nature, so they may do well in a community tank. Keep in mind that they are a shoaling species, so they may be most comfortable when kept in a group with 6 or more of their own kind. They also tend to thrive in an Amazonian biotope tank with slow-moving species of peaceful fish.

Here are some recommendations for otocinclus tank mates:


Final Note: Because many otocinclus catfish in the aquarium industry are wild caught, it is particularly important that you quarantine new fish before adding them to your tank.

If you’re no longer sure that an otocinclus catfish might be the right choice for your tank, don’t worry–there are plenty of other options! Siamese algae eaters, bristlenose catfish, and Plecostomus are also valid options if you’re looking for an algae eater. Check out our guide to different algae eaters or choose one by the type of algae you have in your tank.


comments powered by Disqus
PREVIOUS
ARTICLE
Spotlight on the Apple Snail
Also known as the mystery snail, apple snails are a popular addition to the freshwater tank.
NEXT
ARTICLE
Everything You Need to Know About Nerite Snails
Looking for an addition to your freshwater cleanup crew?