Written by Kate Barrington Updated May 25, 2022
Angelfish are one of the most popular species of freshwater aquarium fish. If you plan to keep these fish, take the time to learn about what species can be kept with them.
Angelfish have long been a favorite among freshwater aquarium hobbyists. These beautiful and elegant fish have a way of capturing your attention and making your fish tank the center of the room. If you hope to raise your angelfish successfully you not only need to make sure that you perform some research so you can meet their basic needs, but you also need to make sure to provide them with a healthy tank environment. Providing your fish with a healthy tank environment requires more than just equipping the tank with a filter and decorating the tank properly – you also have to think about what other fish you plan to keep in the tank. Angelfish can be aggressive in some situations and victimized in others so it is important that you choose carefully when purchasing tank mates for your angelfish.
About Angelfish
These fish are iconic among freshwater species, known for their flat bodies and long, triangular fins. Angelfish are native to South America, found throughout the Amazon River and in the Orinoco and Essequibo river basins. These fish come in a variety of colors and patterns, though many exhibit longitudinal stripes that act as camouflage in their native environment. Under the right conditions, angelfish are not especially difficult to keep in captivity. They require a warm, freshwater environment with a water temperature around 80°F and a slightly acidic pH. Angelfish tend to breed fairly easily in the home aquarium, but you should be sure to provide them with plenty of flat rocks and broad-leafed plants on which they can lay their eggs. Keep in mind that, like most fish, angelfish may eat their own eggs so if you want to raise the fry to maturity you will have to rear them separately.

Angelfish belong to the cichlid family of freshwater fishes which is home to more than 2,000 discovered species. Though many species in the cichlid family are known for their aggression, angelfish are typically not very aggressive. Angelfish are a relatively peaceful species so they are best kept with species that have a similar temperament. The only times an angelfish is likely to become aggressive is during feeding and breeding – this is true of many species, however. The best tank mates for angelfish are peaceful, non-aggressive species which will live in harmony with your angelfishes.

Many aquarium hobbyists who raise angelfish choose to cultivate angelfish-only tanks. In fact, angelfish tend to do best when kept in groups of 5 or more of their own species. This is certainly one option that will guarantee that your angelfish do not have trouble with aggressive tank mates. Even if you do plan to keep primarily angelfish, adding a few corydoras catfish or other peaceful bottom feeders would not be a bad idea. If you do plan to keep other fish in the tank with your angelfish, however, you are unlikely to encounter problems with livebearers or peaceful tetras. Even small cichlids like rams, Krib’s cichlids and keyholes can cohabitate peacefully with angelfish.

There are two things to watch out for when selecting tank mates for your angelfish. The first thing you need to be aware of is species that are known for being aggressive or semi-aggressive. If kept in a tank with aggressive tank mates, your angelfish are likely to become stressed and they may fail to thrive. For this reason, it is generally not recommended that you keep angelfish with Oscars or other cichlids aside from the very small species that have already been mentioned. Other large species may not be a good fit for an angelfish tank either because they, too could become aggressive.

Another thing to be wary of when selecting tank mates for your tank is nipping behavior. Angelfish have very long, delicate fins which can easily be damaged or torn if other fish nip at them. Several species of tetra, namely serpae tetras, are known for their fin-nipping behavior. Another species known for this type of behavior is the tiger barb. While fin-nipping behavior can sometimes be controlled by keeping a large enough school of the offending fishes, they still should not be housed in a tank with angelfish. You may also want to avoid keeping fast, nervous fishes like danios in the tank with your angelfish because they could induce stress in this peaceful species. 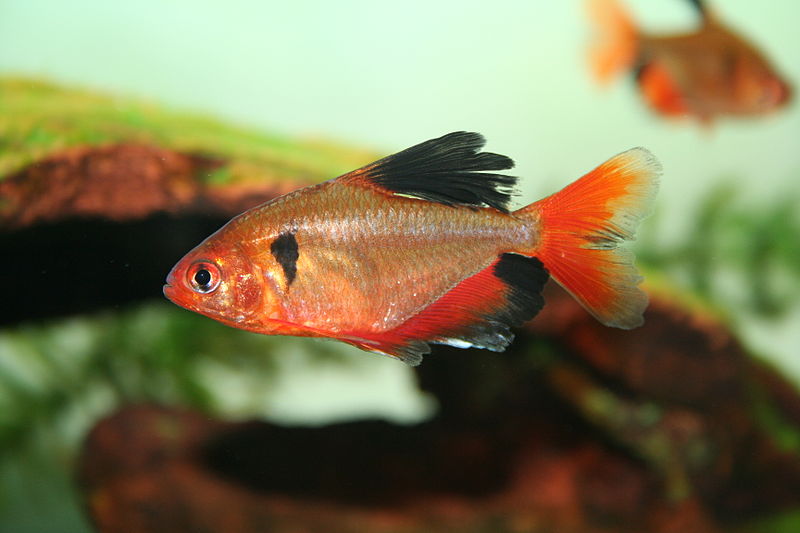 Another way to reduce aggression in your tank in general is to ensure that your tank is not overcrowded and that your fish have been provided with adequate hiding places. Some species of fish do not like to spend a great deal of time out in the open and others simply like to have a safe place to retreat to once in a while. If one or more of your fish becomes aggressive, it is especially important that the other fish in your tank have some place to hide. Providing your fish with adequate space is also very important – when your tank becomes too crowded the water quality will decline and your fish are likely to become stressed. In that situation, they may begin to act more aggressive than they might in normal circumstances. That being said, it is important not only to avoid overstocking your tank but also to keep up a routine maintenance schedule to keep it clean.

Angelfish are a stunning species that can be a joy to keep in the home aquarium. These fish can be a little tricky to keep, however, depending what other fish you have in your tank. To ensure that your angelfish thrive you need to not only provide them with the right tank but also the right tank mates. If you do this, you will be rewarded by healthy and happy angelfish. What more could an aquarium hobbyist ask for?

comments powered by Disqus
PREVIOUS
ARTICLE
Types of Freshwater Aquarium Snails
When it comes to snails in the freshwater aquarium, not all of them are bad.
NEXT
ARTICLE
The Ideal Tank Setup for Oscars
Oscars are a type of cichlid and they are a very amusing species of freshwater fish to keep in the home aquarium.