Written by Kate Barrington Updated April 06, 2018
Cichlids are not for everyone, however, and certain species can be quite challenging to keep. If you are a beginner, you might want to consider one of the top five species discussed below.
If you are looking for a unique group of fish to use in stocking your tank, you can’t do better than cichlids. Cichlids are one of the most diverse and unique groups of fishes in the world and there are thousands of species to choose from. If you haven’t kept cichlids before you should be careful about which species you choose because some are very territorial and difficult to keep in the home aquarium. If you have your heart set on cichlids, consider one of the top five species of South American cichlid recommended for beginners.

The name cichlid refers to fish belonging to the family Cichlidae within the order Perciformes and it is one of the largest families of fishes in the world. It is estimated that there are between 2,000 and 3,000 different cichlid species in existence, though only about 1,650 have been scientifically described. Cichlids can be found all over the world, though the greatest diversity among this family of fishes can be found in South America and Africa. Though cichlids come in all shapes and colors, they all share a few key characteristics. 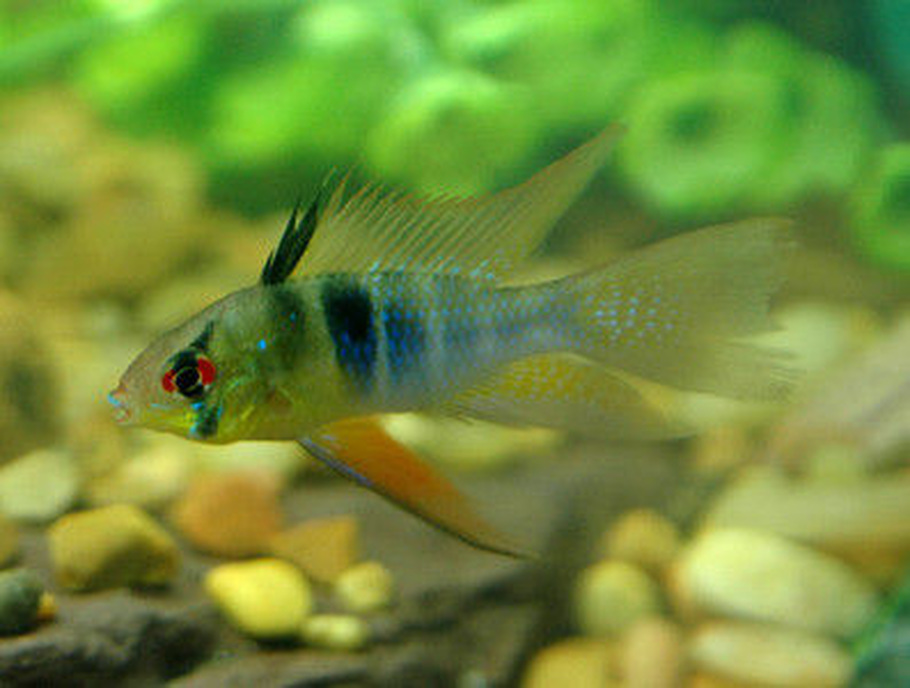 All cichlids exhibit fusion of the lower pharyngeal bones as well as a set of muscles that enables the fish to use the upper and lower bones as a second set of jaws. Most cichlids are very specialized feeders, having evolved to fill a specific niche and adapted to following a specific diet. Many cichlids are herbivores, feeding on algae and plant matter, while some are predatory, eating insect larvae and small fish. Another characteristic that most cichlids exhibit is a laterally compressed body shape. This is most evident in the discus fish, named for its disc-like shape. 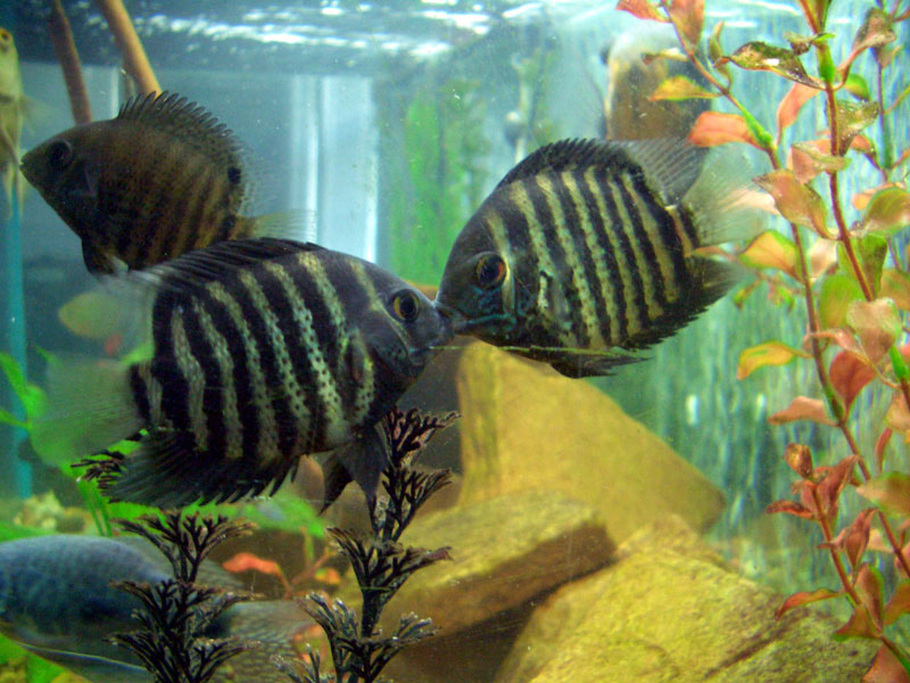 The most well-known South American cichlid is the freshwater angelfish. These fish are known for their tall, pointed fins and their beauty. Unfortunately, angelfish can be sensitive to changes in water chemistry and they may not be the best option for beginners. Another popular group of South American cichlids is the Pike cichlid group – these fish are highly active and ruthless predators which makes them very interesting to keep. Oscars are another group of popular cichlids that can be found in South America, particularly in the Amazon region. These fish are known for having dog-like personalities, developing bonds with their owners and even allowing them to pet them.

There are many different South American cichlid species to choose from when it comes to stocking your tank but some species are better for beginners than others. The top five species listed below are ideal for beginners because they do not grow too large, they are slightly less aggressive than other cichlids, and their water chemistry requirements are not difficult to achieve.


Cockatoo Cichlid (Apistogramma cacatuides) – The Cockatoo Cichlid belongs to the genus Apistogrammma and it is a very colorful species of cichlid. These cichlids are very territorial and should not be kept with other Apistogrammas or rams – they should be the only fish of their kind kept in the tank. Cockatoo cichlid males grow up to 3 inches while females stay a little smaller, around 2 inches, and they are best kept in a male-female pair in a minimum 20-gallon tank. This species is a micropredator, feeding on live foods as well as flakes and crisps. These cichlids prefer neutral to soft water at a pH around 5.0 to 7.0 with dim lighting.


Rainbow Cichlid (Hertilapia multispinosa) – The Rainbow Cichlid is named for is intense colors – even as juveniles they are quite colorful. This species stays fairly small, growing only 6 to 7 inches long, and they are not particularly aggressive or territorial. The Rainbow Cichlid can be kept with a variety of other South American species including barbs, loaches, tetras, and catfish. This species is omnivorous, feeding on a variety of foods including live foods, algae discs, and fresh vegetables. These fish prefer a higher pH range between 7.0 and 8.0 with warm water temperatures around 78F.


German Blue Ram (Mikrogeophagus ramirezi) – The German Blue Ram can naturally be found in the Orinoco River Basin. These are a type of dwarf cichlid, growing only up to 2 inches long. German Blue Rams are slightly territorial fish so they should be housed only in male-female pairs or on their own. These fish are typically only aggressive with other cichlids, however, so you can keep them with other species as long as the other fish aren’t territorial. German Blue Rams require a neutral to low pH around 4.0 to 7.0 and they enjoy warm water temperatures between 75 and 82F. This species is carnivorous so you will need to feed them a diet of live foods including brine shrimp. 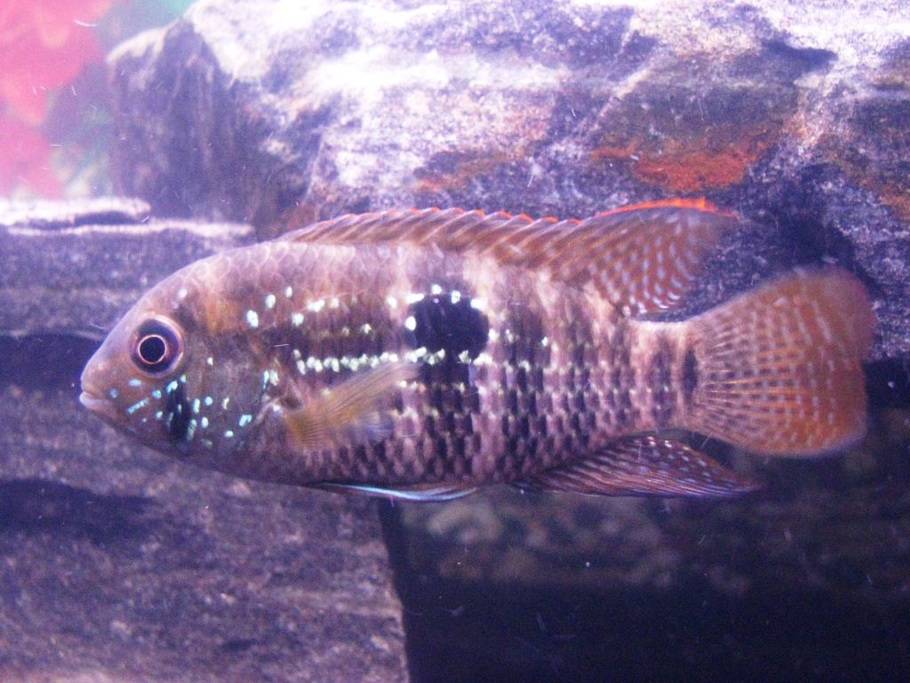 Blue Acara (Aequidens pulcher) – The Blue Acara develops a dark blue coloration in adulthood that is really quite striking. These fish are unaggressive for the most part, though they do tend to dig in the substrate and may cause a problem for plants. This species remains small, growing only 4 to 5 inches long, and they prefer a pH range between 7.0 and 7.8. Blue Acaras can be kept with other South American species that are too big to eat, like catfish, corydoras, and tetras.


Severum (Heros serverus) – Severums are a moderately sized group of cichlids, growing between 8 and 10 inches long. These cichlids are less aggressive than other species and they typically do not exhibit extreme territorial tendencies. Severums can be housed with other South American fish like tetras as well as larger predatory cichlids. This species is omnivorous, likely to accept a variety of foods including live food, flake foods, and pellets. Severums prefer lower pH ranges between 5.0 and 7.3 and they enjoy planted tanks with slow water movement.


Cichlids are an amazing group of fishes known for their diversity. These fish are some of the most unique and colorful fish in the world which makes them a joy to keep in the home aquarium. Cichlids are not for everyone, however, and certain species can be quite challenging to keep. If you are a beginner, you might want to consider one of the top five species discussed above.


comments powered by Disqus
PREVIOUS
ARTICLE
Top Freshwater Aquarium Bullies
Some species of freshwater fish are simply more aggressive than others.
NEXT
ARTICLE
Keeping Dwarf Gouramis in the Freshwater Tank
The dwarf gourami is a small but brightly colored freshwater fish that makes an excellent addition to the community tank.