Written by Kate Barrington Updated March 09, 2014
When it comes to snails in the freshwater aquarium, not all of them are bad. Read more to learn the benefits of aquarium snails as well as what types to keep and what to avoid.
If you have previous experience in the aquarium hobby, you may be familiar with aquarium snails. Aquarium snails are often cited as a nuisance that can take over the tank seemingly overnight, covering live plants and clogging the intake valves of aquarium filters. While this may sometimes be the case, aquarium snails can actually serve as a benefit in some situations. Certain species of snail can act as scavengers in the tank, cleaning up excess detritus that might have a negative effect on the water quality in your tank.


Role of Snails in the Aquarium


While the exact diet of aquarium snails will vary according to species, most snails are scavengers – that is to say that they feed on detritus in the aquarium. Snails typically feed on decaying plant matter as well as algae, dead fish and uneaten fish food that accumulates along the bottom of the tank. Certain species of snail, on the other hand, are carnivorous, feeding on tiny aquatic animals such as gastropods. Snails that act as scavengers serve the benefit of helping to maintain high water quality in your tank – by removing organic debris and other detritus from the tank, snails help to prevent the accumulation of harmful toxins like ammonia and nitrites. 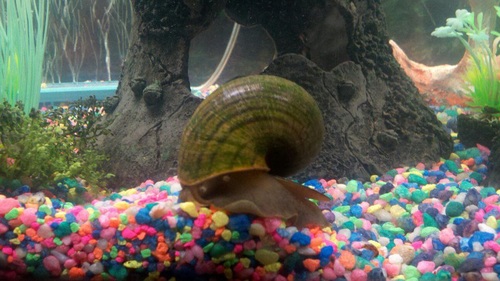 Although snails have the potential to serve a positive function in the freshwater aquarium, they may also be a nuisance at times. One thing you may need to worry about is your live plants – some snails will feed on healthy plants but most only feed on decaying plant matter. Another thing to keep in mind is that snails are likely to feed on fish eggs so it is not a good idea to introduce snails into your breeding tank. In addition to these practical problems, snails also have the potential to cause an aesthetic problem. Once introduced into your tank, certain species of snail have the potential to reproduce quickly, covering tank walls and objects in a way that detracts from the appearance of the tank.


Apple Snail - One of the most common snail species kept in the freshwater aquarium hobby is the apple snail. These snails come in a variety of colors including blue, gold and zebra. The apple snail can breed prolifically if overfed so they are only recommended for large tanks and tanks that are not planted. You should also be aware that apple snails can grow up to 6 inches in diameter, so do not purchase one of these snails if you don’t have enough space to keep it. Some apple snails, like the Pomacea canaliculata, have a tendency to eat aquarium plants, so be careful when using these snails in your tank.

Trumpet Snail - Another good snail for the aquarium is the trumpet snail. Trumpet snails are available in a variety of patterns and colors and they are generally very attractive. This species does not tend to feed on plants but it will feed on detritus. In fact, trumpet snails tend to burrow through the substrate, feeding on accumulated debris below the surface of the substrate. These snails tend to be active only at night and they do not generally disturb other tank inhabitants.


Nerite Snails - Nerite snails like the zebra nerite snail are very popular in the freshwater aquarium hobby. These snails are highly appreciated by aquarium hobbyists because they are both attractive and beneficial in the freshwater tank. Nerite snails range in size from ½-inch to a full inch and they are available in a variety of colors. These snails have the potential to breed quickly but some species, like the zebra nerite snail, are only likely to breed in brackish conditions. The main benefit of these snails is their penchant for eating algae – these snails will clean algae growths off tank walls, aquarium decorations and even plant leaves. One thing to be wary of with these snails is that they may escape from the tank. These snails are able to live out of the water so, if one escapes, simply pick it up and put it back in the water.


One of the most commonly cited pest snails is the pond snail. These snails can be great scavengers in the freshwater aquarium but, unfortunately, many aquarium hobbyists make the mistake of overfeeding them, thus enabling them to reproduce uninhibited. Pond snails typically remain small, only growing to about ¼-inch in size which enables them to hide in gravel and in the crevices of aquarium decorations.


The ramshorn snail is another species which has earned itself a bad name. This species was named for the hornlike shape of its shell which comes in a variety of colors including red, pink, blue and brown. As is true of pond snails, problems with ramshorn snails are usually related to overfeeding. These snails reproduce very quickly, laying clutches of eggs in a layer of hard mucus on any available surface in the aquarium. Unfortunately, these snails are incredibly difficult to eradicate because for every snail you are able to see, there are probably 5 that you cannot see.


Aquarium snails are not always a nuisance in the freshwater aquarium, but you do need to be careful when introducing them to your tank. Certain species are more likely than others to become a problem and it is always a good idea to avoid overfeeding your snails and other tank inhabitants. If you are looking for a simple way to control aquarium algae, introducing a freshwater snail might be a good solution. Just be sure that your snails have enough food to survive and that they won’t cause a problem with your other tank inhabitants.


comments powered by Disqus
PREVIOUS
ARTICLE
Stocking Fresh Water Fish Tanks
Learn how to select the right quantity and combination of fish for your freshwater aquarium.
NEXT
ARTICLE
Compatible Tank Mates for Freshwater Angels
Angelfish are one of the most popular species of freshwater aquarium fish.