Written by Kate Barrington Updated May 26, 2022
The pet trade gets a bad rap for exploiting wild animals but sometimes the opposite is true. Aquarium hobbyists have played a role in preserving 30 species that have since gone extinct in the wild.

There’s a great deal of controversy surrounding exotic pets like sugar gliders, slow loris, and big cats. Animal rights supporters claim that wild animals belong in the wild and keeping them as pets is cruel. There is a difference, however, in keeping a wild animal as a pet and protecting endangered species by breeding them in captivity. Conservation breeding programs have saved a number of endangered species from extinction including the Arabian oryx, Przewalski’s horse, and the California condor.

While the practice of keeping wild animals as pets is often more harmful than helpful, it isn’t always the case within the aquarium industry. In fact, the aquarium hobby has helped bring 30 species of wild fish back from the brink of extinction.

Is the Aquarium Hobby Helpful or Hurtful?

The truth is there isn’t a simple yes or no answer to this question. When it comes to the preservation of natural populations, there are certainly instances in which the pet trade has been part of the problem.

For example, when the movie Finding Nemo was released in 2003, it led to a sudden spike in the popularity of clownfish. Increased demand for clownfish in the pet trade led to an increase in wild capture, causing clownfish to all but vanish from many areas. Some areas still use cyanide to capture fish for the aquarium trade as well which can be damaging to coral reefs. 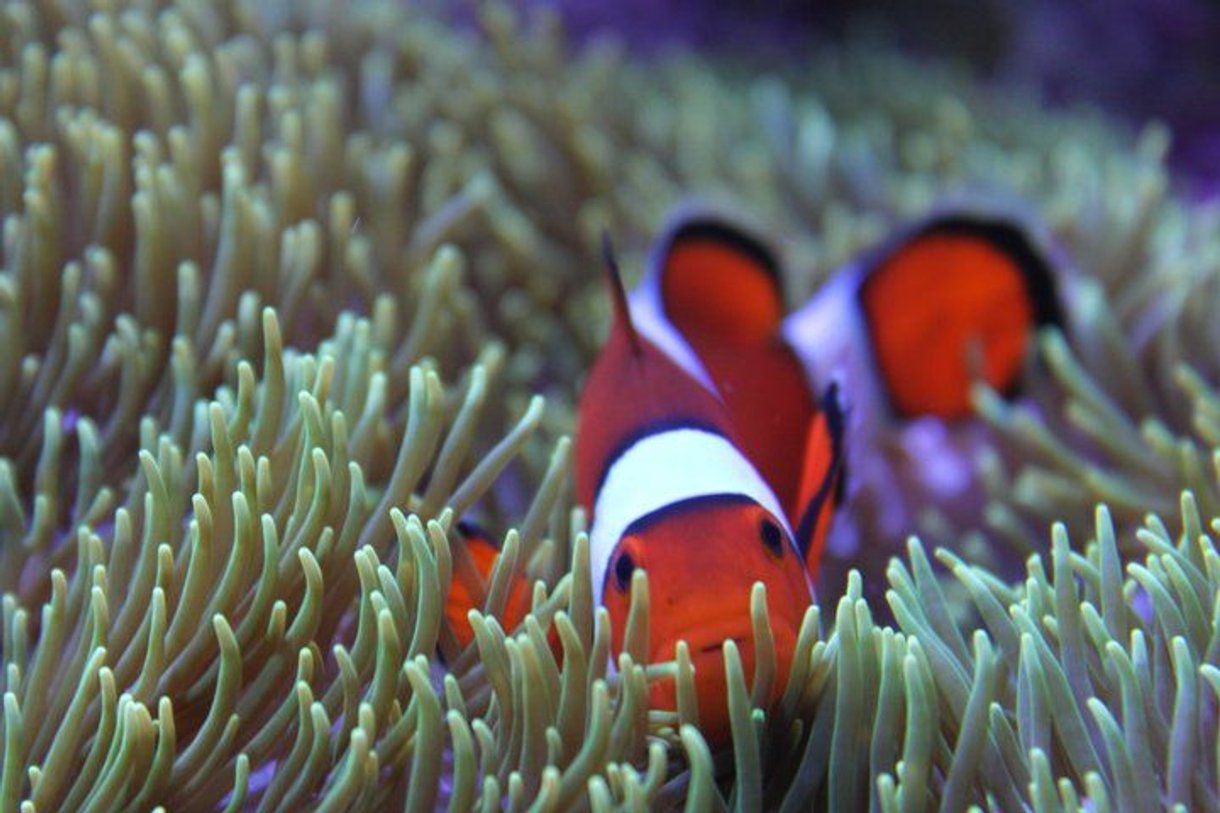 Another problem with the aquarium trade is its contribution to...

THE SURPRISING HEALTH BENEFITS OF A HOME AQUARIUM

Written by Kate Barrington Updated June 08, 2022
In stressful times, having a home aquarium could be a benefit. Read on to learn about the top 6 health benefits of keeping a fish tank at home.

In March 2020, the COVID-19 crisis became real in the United States. Having seen the devastating consequences of the disease in China and Italy, American lawmakers took steps to protect the public by closing non-essential businesses and encouraging social distancing. In a time when millions of Americans are working from home and anxiety levels are running on high, any method of stress relief is a help.

It’s no secret that owning a pet has measurable benefits for your health, but these benefits are typically associated with traditional pets like dogs and cats. There’s a reason, however, that doctor’s offices and health clinics all over the world have fish tanks in them. Your home aquarium could be just as beneficial for your health as the family dog. Here’s what you need to know. 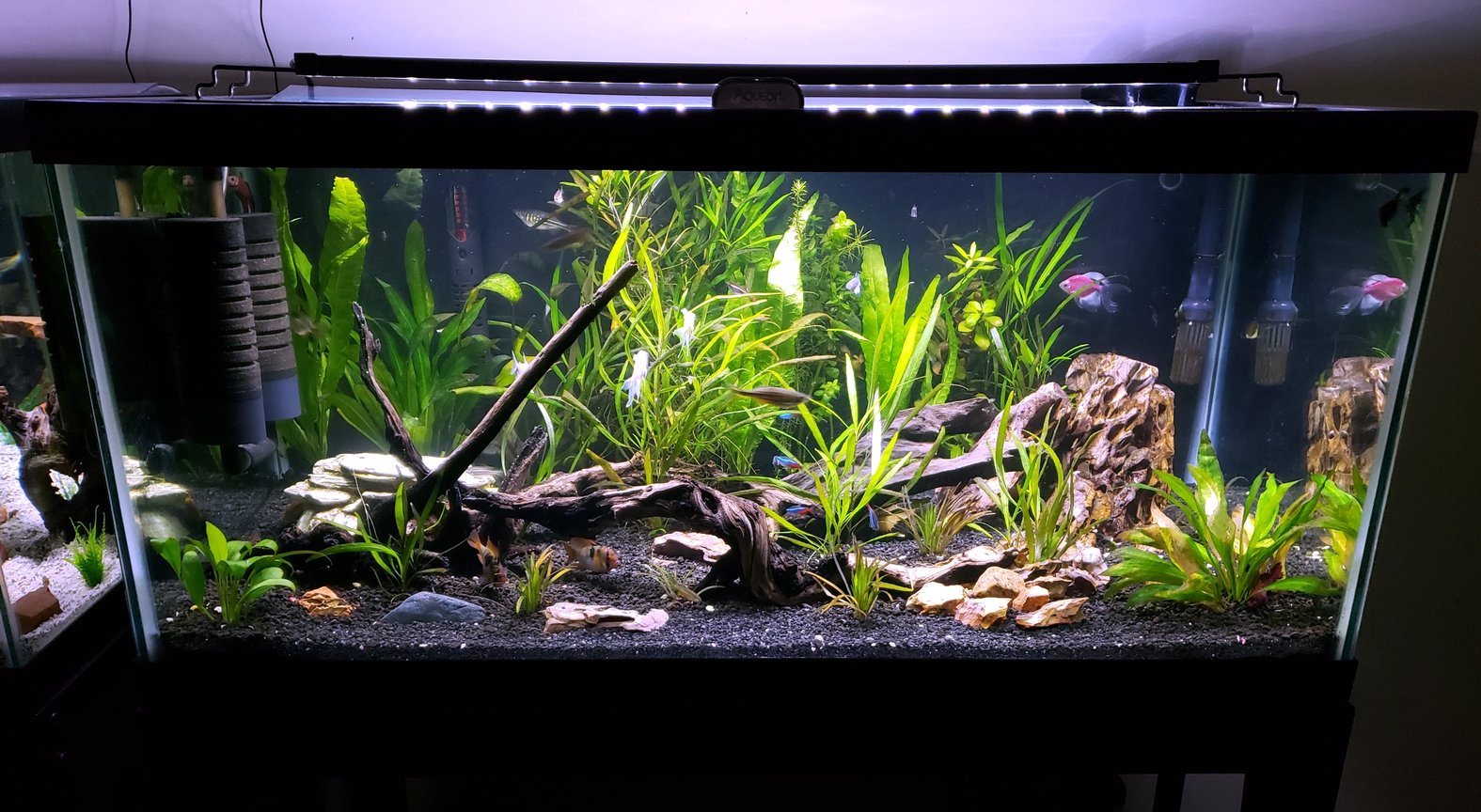 Though cats and dogs are seen as the typical pets, the 2019 National Pet Owners Survey shows that aquarium fish are kept as household pets in over 13 million American homes. This makes them the third most popular type of pet, after dogs and cats, of course. Keeping a home aquarium is a big responsibility, but it does have its benefits.

Here are the top 6 benefits associated with keeping a home aquarium:

It’s difficult to feel stressed when looking at a thriving home aquarium. There’s just something peaceful about it that calms you and those around you. This is...

Written by Kate Barrington Updated May 26, 2022
The saltwater aquarium industry takes millions of fish from oceans around the world each year. A new bill has been introduced to limit aquarium fish collecting.

When you stroll through the aisles at your local fish store, marveling at all the colorful fish, do you ever wonder where they came from? Freshwater fish are bred in huge numbers, sometimes selectively to bring out certain traits (think about all of the different tail types in betta fish. When it comes to tropical marine fish, however, the water is murky.

A staggering number of tropical fish are imported in the United States each year and over 1 million American households have saltwater aquariums. What many hobbyists fail to realize, however, is that they are supporting a trade that takes saltwater fish right out of the ocean to put them in tanks.

In this article, we’ll explore the saltwater aquarium industry in depth to learn how tropical fish get from the ocean to your aquarium. We’ll also discuss the debate between aquacultured and wild-caught aquarium fish while taking a closer look at some of the species that have been successfully captive-bred. 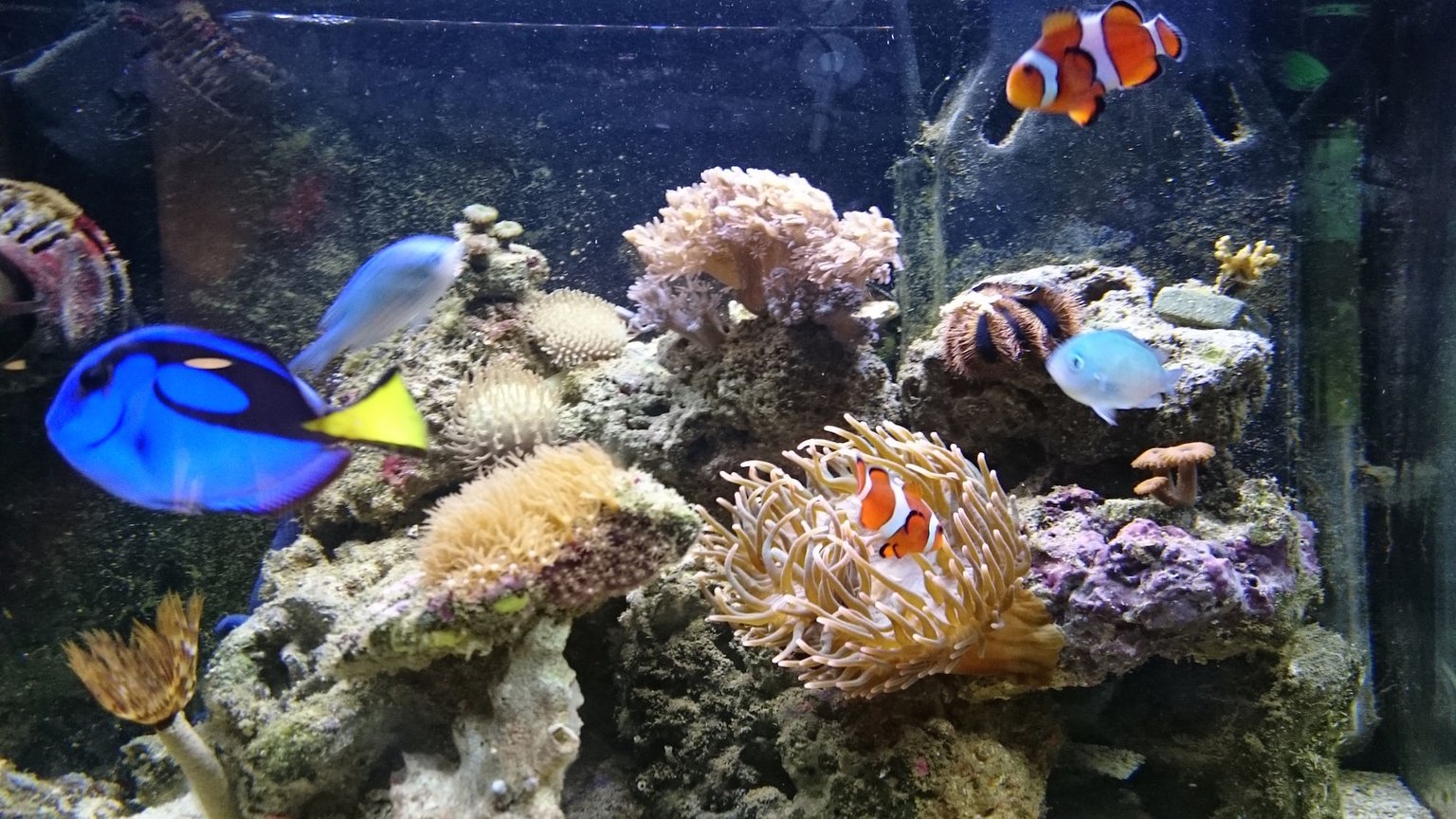 How Do Tropical Fish Get from the Ocean to the Aquarium?

According to a 2014 survey conducted by the American Pet Products Association, more than 1 million American households have a saltwater aquarium. More than 10 million tropical fish are imported in the United States alone each year, more than any other country. Though a small number of saltwater species have been captive-bred, the majority of the estimated 2,000 unique species involved in the ornamental fish trade are captured from coral reef...

The Surprising Health Benefits of a Home Aquarium
In stressful times, having a home aquarium could be a benefit.
Cleaning Your Tank Can Make You Sick
Cleaning your aquarium is a necessity in order to keep your fish healthy.
The Science Behind Behavior: Fish Jumping Out of Tanks
Guppies are known, in particular, for jumping out of the tank.
Species Spotlight: The Axolotl
If you are looking for a unique species around which to center your next tank, consider the axolotl.
Trending: Jellyfish in the Home Aquarium
You have probably seen your fair share of jellyfish in zoo aquariums, but did you know that it is possible to keep these creatures as pets?
Aquarium Hobbyists Help Save 30 Species from Extinction
The pet trade gets a bad rap for exploiting wild animals but sometimes the opposite is true.
Self-Poisoning: A Damaging Defense Mechanism
If you have ever brought a group of corydoras catfish home from the store to find that they all died in transport, this article will be incredibly enlightening.
The Oldest Aquarium Fish
Some fish are simply going to live longer than others, but what species have the longest lifespans?
Trending: Adding LED Moonlights to the Aquarium
With advances in aquarium lighting technology, you now have the option to add specialized nighttime lighting to your aquarium.
Aquarium Fish News: Bill Introduced to Limit Aquarium Fish Collecting
The saltwater aquarium industry takes millions of fish from oceans around the world each year.
How Has Technology Changed the Aquarium Hobby?
Advances in modern technology have changed the world we live in, but how has it affected the aquarium hobby?
Modern advances in technology affect every industry - even the aquarium hobby.
Media Reactors - An Innovative Approach to Aquarium Filtration
When it comes to aquarium filtration there are many options to choose from.
Species Spotlight: New Corydoras Catfish Discovered
A species of Corydoras catfish that was discovered in the 1990s has finally been officially described and named.
New Discovery Key to Keeping Pinnatus Batfish
The Pinnatus Batfish is one of the most striking species of saltwater aquarium fish, but notoriously difficult to keep in the home aquarium.
Aquarium News: Five New Species of Dwarfgobies Discovered
Gobies are some of the smallest fish in the world and dwarfgobies are the smallest of those.
Trending: Sophisticated Water Quality Monitoring Devices
Testing your aquarium water is a chore that no aquarium hobbyist likes.
Trending: Glow in the Dark Fish
Glow in the dark fish may not be a new trend but new additions to the market have recently been made -- glow in the dark convict cichlids and angelfish.
Betta Fish Trending Topics for January 2017
The betta fish is and will forever be one of the most popular types of aquarium fish.
Trending: Colorful Species for the Marine Tank
Color has always been a main component of the marine tank but these species are keeping the bar high.
Shrimp in the Home Aquarium: Spring 2017 Aquarium Trends
If you're looking for a unique way to stock your new tank, give freshwater shrimp a try.
The Bright and Colorful Discus Fish: Spring 2017 Aquarium Trends
Discus fish are some of the most brightly colored fish in the animal kingdom.
Newly Discovered Fish Species of 2013
New species of plants and animals are being discovered every year.
Aquascaping the Aquarium: March 2017 Aquarium Trends
The art of decorating a home aquarium is called "aquascaping" and it is a trending topic in aquarium social media this month.
Changes in Marine Aquarium Design
The only thing that doesn't change in the world is the fact that things change.
How Aquarium Trends Affect the World
Trends in the aquarium trade have an effect on more than just aquarium hobbyists -- they can affect the whole world.
Cramped, Boring Environments Lead to Anger in Fish
A recent study conducted by a biology professor at Case Western Reserve University reveals that environment size and complexity has a direct impact on aggressive behavior in aquarium fish.
Cichlid Compatibility: February Week 2 Aquarium Trends
In the second week of February 2017, one of the highest trending topics in aquarium-related social media is in regard to cichlid compatibility.
Wireless Aquarium Lighting Solutions
One of the latest developments in aquarium lighting is wireless control of LED systems.
Innovations in Marine Disease Treatments
Treating marine aquarium diseases is easier than ever with innovations like medicated frozen fish food.
Your Aquarium Might Not Be as Peaceful as You Think
For many aquarium hobbyists, the aquarium is a source of relaxation and serenity.
Trending: Nano Tanks More Popular Than Ever
A nano tank is more than just a small fish tank -- it is a compact, self-contained ecosystem.
Study Reveals that Fish May Have Individual Personalities
While some species like Oscars are known for exhibiting dog-like behaviors, a recent study shows that many fish are capable of developing individual personalities.
Trending: Compact Aquarium Equipment
One of the latest trends in aquarium equipment is compact upgrades.
News: Unique Species to Hit the Market
The new year brings a new wave of unique species to add to your home aquarium.
News: Lionfish Invasion in the Atlantic
Lionfish are a very popular species in the marine aquarium hobby but they have begun to threaten native populations in the Atlantic as they spread from their native habitat in the Indo-Pacific.
News: Trade Continues Despite Threatened Conservation Status
A recent paper published by the Conservation Research Group and the IUCN shows that more than 30 threatened species endemic to India are still being regularly exported, despite their conservation status.
North American Aquariums Go Green
From recycling and organic farming, sustainability and conservation are two hot trending topics.
The Top New Coral Species of 2013
The saltwater aquarium hobby is ever-changing -- trends and even species come and go.
Read more articles (39)

Identifying and Treating the Most Common Cichlid Diseases
Properly Aerating Your Aquarium
What Are the Best Cichlids for a Community Tank?