Written by Kate Barrington Updated May 26, 2022
The name "puffer fish" conjures an image of a balloon-like animal but these fish are so much more than their comical appearance. Keep reading to learn what makes puffer fish unique and how to care for them.
If you have been an aquarium hobbyist for any length of time, you’ve probably come across some unique species of fish. Some fish are bright and colorful while others have interesting fin shapes. One fish that is especially unique is the puffer fish. There are a variety of different kinds of puffer fish out there – freshwater, brackish, and even saltwater. Keep reading to learn more about how to care for brackish and freshwater puffers.
What Do Puffer Fish Look Like?
Though the exact details will vary from one species to another, most puffer fish have the same kind of body shape. The best way to describe the shape of a puffer fish’s body is to call it chubby or club-shaped. Another interesting point about the puffer fish is that their bodies are completely rigid. Most fish have the ability to bend their bodies side to side, at least to some degree, but the puffer fish does not. Puffers rely solely on their fins for balance as well as motion. But what really sets the puffer fish apart from other species is its unique ability to change size. As the name suggests, puffer fish are able to “puff” themselves up so that they appear larger – this is a defense mechanism they use to scare off predators. Additionally, puffer fish have small, prickly spines all over their bodies. 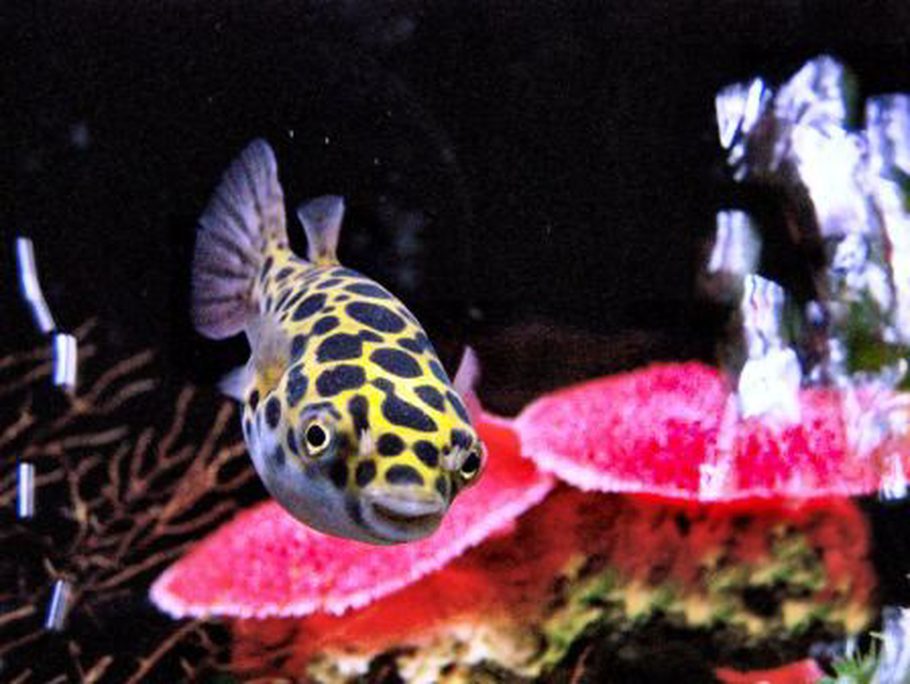 What is it Like to Keep Puffer Fish?
Cultivating and maintaining a thriving home aquarium is a matter of pride for many aquarium hobbyists – there is also something to be said for the thrill of success in keeping unique and difficult species. Many experienced hobbyists would agree that puffers are not at the highest level of difficulty when it comes to their care and keeping, but they are moderately difficult to care for. One reason for this is that they have specific requirements for water chemistry. Puffers do not have scales or gill covers, so they are very sensitive to toxins like ammonia. It is also important to note that while there are some freshwater puffer species, many puffer fish require a brackish environment in order to thrive.
Puffer fish also have special dietary needs that can be tricky to deal with. In the wild, puffer fish are predators. They feed on small fish, crustaceans, shellfish, and snails. In the home aquarium, however, puffer fish tend to eat anything and everything. To keep your puffer fish healthy, you’ll need to offer a variety of frozen, fresh, and live meaty foods. One thing you may be interested to learn about puffers is that they can develop a habit of “begging” for food – much like Oscars. But because these fish produce so much waste you need to be very careful about not feeding them too much. Small puffers under 2 inches need to be fed once a day while puffers 2 to 4 inches need to be fed every other day. Very large puffers (over 4 inches) can be fed just two to three times per week. 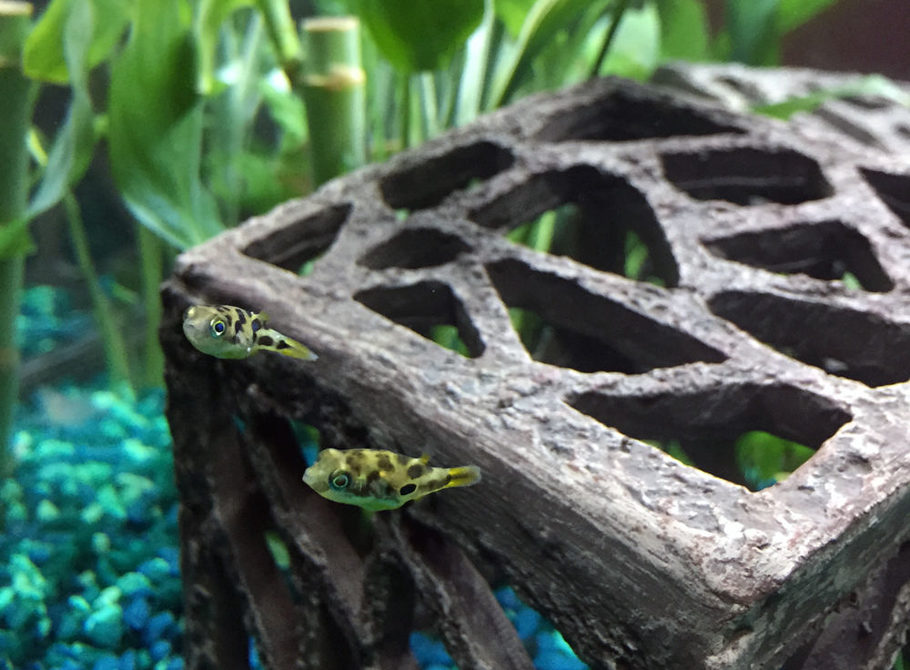 For the most part, it is best to keep a single puffer fish – there are many reasons why this is the case. First, puffer fish tend to be messy eaters and they produce a good bit of waste. Keeping more than one puffer in the same tank is just asking for trouble – you’ll have to perform frequent water changes to maintain water quality. Second, many puffers are territorial and aggressive. Even if the other fish in your tank are not large enough for your puffer to consume, your puffer could nip their fins. Do not be fooled by a juvenile puffer fish that seems to get along well in a community tank – most puffers turn aggressive as they become more mature.
Overview of Puffer Fish Species
According to Animal World Encyclopedia, there are approximately 150 different species of puffer fish, but fewer than 30 are true freshwater puffers. Most puffer fish are saltwater fish and only a handful are considered brackish species. Before you make the decision to keep puffer fish for yourself, take the time to learn about the different species. Below you will find an overview of some of the most popular species of brackish and freshwater puffers:
- Malabar Puffer (Carinotetraodon travancoricus) – Also known as the Indian Dwarf Puffer and the Bumblebee Puffer, this species is native to India and can be found in freshwater habitats. The Malabar puffer remains very small, generally under 1 inch, but it is still a highly aggressive species. These puffers have a tannish yellow color with dark brown spots covering most of their bodies. Malabar puffers prefer to be kept in planted aquariums and they are best kept singly unless the tank is very large. Do not keep this species with other puffers, especially other males.
- Fahaka Puffer (Tetraodon lineatus) – This species of puffer fish is also known as the Band Puffer or the Nile Puffer and it is one of the largest species, growing up to 8 inches in length. The Fahaka Puffer is native to various lakes and rivers in Africa and it can survive in both freshwater and brackish habitats. In the home aquarium, however, they prefer freshwater tanks with plenty of plants and rockwork. Fahaka Puffers are extremely aggressive and, due to their size, they should not be kept with other fish – especially fish that are small enough to be seen as prey. 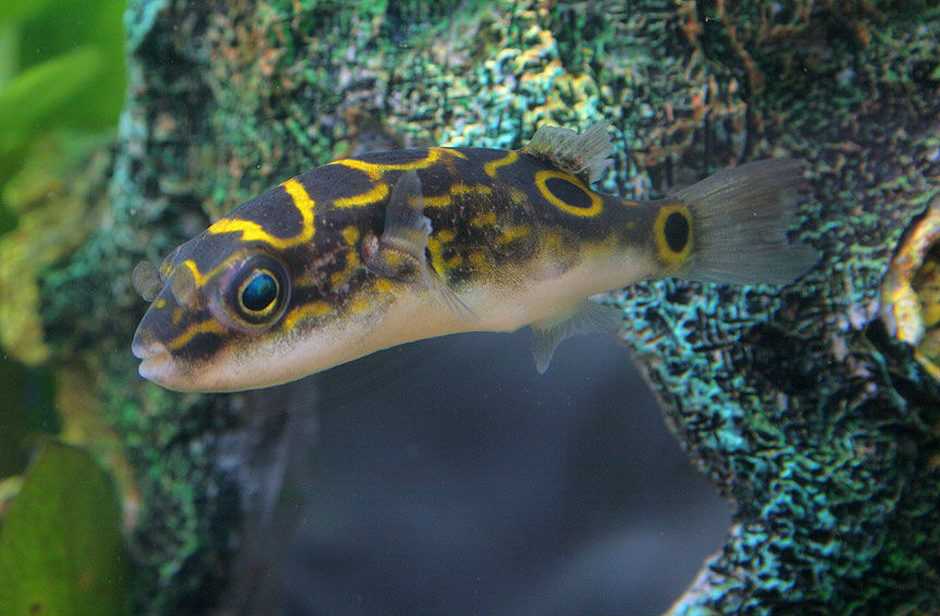 - Red Eye Puffer (Carinotetraodon lorteti) – Named for the bright red color of its eyes, the red eye puffer is not one of the most common species in the aquarium trade but it is definitely one to consider if you can find one. These fish remain very small but they have a big attitude and a lot of aggression. Red eye puffers have white or light grey bodies with a dark marbled pattern over top. This species does best in a planted tank and it is a solely freshwater species.
- Green Spotted Puffer (Tetraodon nigroviridis) – This species of puffer is aptly named because it has a yellow-green coloration with black spots all over the body. The green spotted puffer fish is fairly large, growing up to 6 ½ inches in length, and it is a very aggressive species, like most puffers. This puffer fish can be found throughout African and Asia in freshwater and brackish environments. In the home aquarium, this species does best in a brackish tank with plenty of plants and hiding places. When they are still juveniles, this species can tolerate freshwater but mature puffers need a brackish environment.
- Figure 8 Puffer (Tetraodon biocellatus) – This medium-sized puffer fish is native to Asia and it should be kept in a brackish environment. The Figure 8 Puffer grows up to 3 inches long and it is a very aggressive species, particularly toward members of its own species. This puffer fish is dark brown to black in color with a white belly and it is covered with yellow lines and/or spots. The best aquarium for this type of puffer is a planted brackish tank (fake plants are okay) with sandy substrate and plenty of rockwork to provide hiding places.
By now it should be clear to you that puffer fish are a unique and interesting type of fish. If you are thinking about starting a new tank and want to take on a bit of a challenge, consider one of the puffer fish species discussed above.
comments powered by Disqus
PREVIOUS
ARTICLE
Larger Tetras for the Community Tank
Many tetras are known for their small size and peaceful nature, but there are some larger tetras that can be a good choice for the community tank.
NEXT
ARTICLE
Choosing the Right Algae-Eater by the Type of Algae in Your Tank
There are many different types of aquarium algae and not all algae eaters will eat every type.