TIPS FOR PROTECTING YOUR AQUARIUM AGAINST HIGH SUMMER TEMPERATURES

Written by Kate Barrington Updated May 26, 2022
During the summer months, it may become more of a challenge to keep your aquarium temperature stable. Keep reading to learn more about tips for protecting your tank against high summer temperatures.
In the heat of summer, the temperature in your aquarium is likely to rise. This is particularly true if your aquarium is located near a window or in direct sunlight. While many fish can withstand minor fluctuations in tank temperature, very high water temperatures can be dangerous for some fish. If you struggle to keep your tank temperature down during the summer, you might want to rethink your plan and restock your tank with more high-temperature-tolerant fish.
In this article, you will learn about the ideal temperature range for an aquarium and receive tips for maintaining that temperature. You’ll also find a list of aquarium fish that can survive higher tank temperatures.
What is the Ideal Temperature Range for an Aquarium?
Each species of fish has its own preferences for water temperature based on its natural habitat. Species that come from tropical climates tend to prefer warmer waters than fish that come from mountainous regions. For example, tropical reef species like tangs and wrasses prefer water temperatures in the 74°F to 78°F range while species like the White Cloud Mountain Minnow can survive temperatures between 64°F and 72°F, or lower. Most aquarium fish, however, prefer warmer waters in the range of 72°F to 78°F, sometimes up to 80%. In addition to knowing the right tank temperature, you also need to keep it stable – fluctuations in temperature can be stressful for your fish. 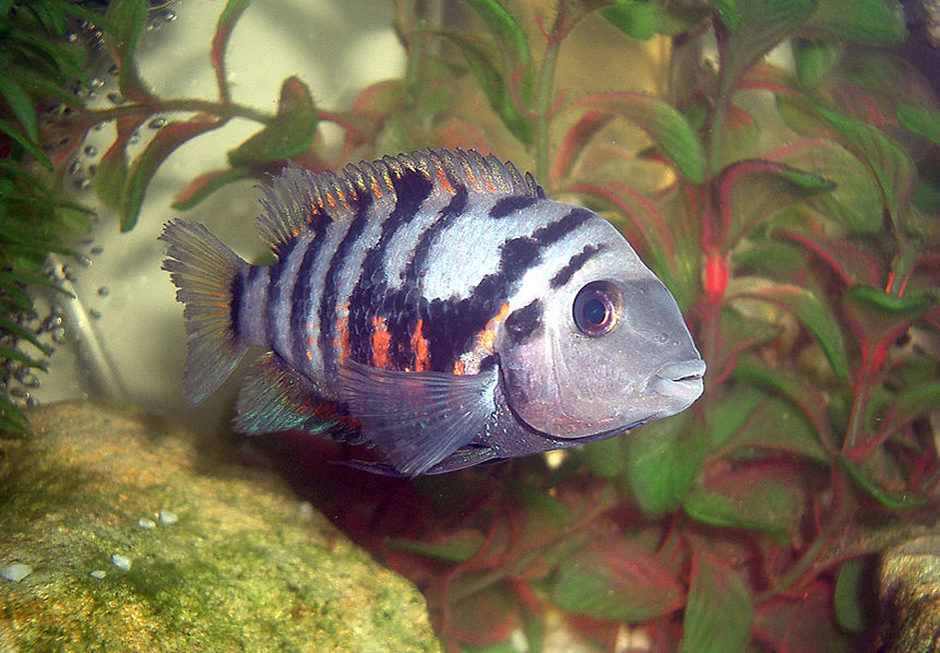 Most aquarium fish can withstand temperatures up to 80°F for a short period of time, though it may cause complications to develop. At higher temperatures, aquarium fish require more food because their metabolisms have to work that much harder. It is also important to note that higher tank temperatures are often correlated with lower oxygen levels because, the higher the temperature gets, the lower the oxygen-carrying capacity of the water. At higher temperatures, it becomes even more important that you keep your aquarium clean and that you provide plenty of surface agitation to promote gas exchange on the surface. You may also need to change the water in your tank more often.
Tips for Maintaining Tank Temperature
For the health and wellness of your fish, it is important that you maintain a stable tank temperature in your aquarium. One way to do this is to protect your tank from things that might cause the temperature to change. Avoid placing your tank next to an air-conditioning vent or window, and don’t allow your tank to be exposed to direct sunlight. You should also consider hooking your aquarium lights up to an automatic timer so they only stay on for 12 hours a day – this will help to keep your tank lights from overheating your tank. You really only have to worry about that, however, with metal halide lighting systems and other lights that produce a lot of heat.
Another thing you can do to keep your tank temperature steady is to invest in a quality tank heat and/or a tank chiller. If you live in an area that has a cool to moderate climate, it will probably be more important for you to have a tank heater. If you live in an area that gets very hot during the summer, or that remains warm all year round, you may need an aquarium chiller. To keep your tank heated to the right temperature, your best bet is a submersible heater with an adjustable thermostat. If your average tank temperature is too high, whether due to climate or heat-producing lighting systems, an aquarium chiller can help you keep things cool.
Aquarium Fish That Thrive at High Temperatures
Though many tropical aquarium fish prefer temperatures in the 72°F to 76°F range, there are some fish that can not only survive, but thrive in higher water temperatures. If you know that you are going to have trouble regulating your tank temperature due to the climate in which you live or the location of your tank, you may want to consider stocking your tank with fish that are more high-temperature-tolerant. Here is a list of some of the fish that can survive temperatures above 80°F:
German Blue Ram (Mikrogeophagus ramirezi) – This Central American cichlid comes from a very warm climate so he can survive temperatures around 80°F – breeding temperatures can even be several degrees warmer. This cichlid grows up to 2 ½ inches long and is known for his bright blue and yellow coloration, as well as the iridescent blue spots on his fins. These fish are omnivorous and prefer densely planted tanks with plenty of rockwork.

Uaru Cichlid (Uaru amphiacanthoides) – Though this may not be one of the most common aquarium species, the Uaru cichlid can thrive in temperatures up to 83°F, or more. This cichlid grows up to 10 inches and it comes from the Amazon River basin. Uaru cichlids are semi-aggressive and can be kept in a large tank with other medium-sized cichlids.

Convict Cichlid (Cryptoheros nigrofasciatus) – The Convict cichlid grows up to 7 inches in length and it can be somewhat aggressive. This species thrives in temperatures up to 80°F or more and can be kept with other cichlids of similar size. This species is particularly easy to breed in the home aquarium as long as they have caves in which to spawn. 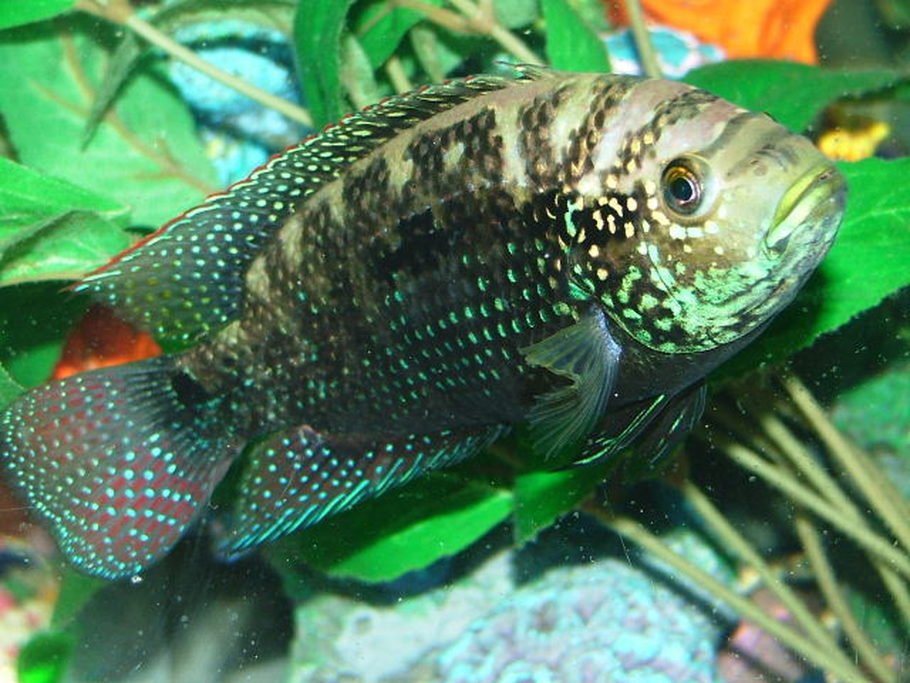 Salvini Cichlid (Cichlasoma salvini) – This is not one of the more popular species of cichlid for the home aquarium, but these fish can thrive in temperatures up to 85°F. The Salvini cichlid is known for its bright yellow coloration with large, black blotches running along the lateral line. This species grows up to 6 inches in length and they are fairly aggressive and territorial, particularly during breeding.

Rainbow Cichlid (Herotilapia multispinosa) – The Rainbow Cichlid grows up to 4 inches in length and can tolerate tank temperatures up to 84°F, or more. This species is named for its colorful appearance and it can sometimes get along with smaller tropical fish. Rainbow cichlids can be fairly territorial during spawning, however, and they require a varied diet to thrive.

Freshwater Angelfish (Pterophyllum scalare) – The freshwater angelfish is native to South American swamps and rivers where water temperatures climb as high as 86°F. These fish are very peaceful by nature, but they do have some unique requirements. Their tall fins necessitate an aquarium that is tall rather than long and they prefer planted tanks with plenty of open swimming space. Angelfish are carnivorous as well, so be careful about keeping them with small tankmates.

Discus Fish (Symphosodon aequifasciatus) – These fish are known for their round, disc-like shape and their brilliant colorations. Discus fish are peaceful South American cichlids which are best kept in schools with others of their own kind. These fish are some of the most colorful freshwater fish in the world.
Maintaining a thriving home aquarium is all about stocking your tank with the right fish. There are many factors to consider in making this decision, and your average tank temperature should definitely be one of them. Your best bet is to test your tank water to determine the water chemistry and then choose fish that are amenable to those conditions. It will be much easier than trying to change your tank conditions and keep them steady.
comments powered by Disqus
PREVIOUS
ARTICLE
Can a Routine Water Change Kill Your Fish?
We've all seen it - fish die unexpectedly after a water change.
NEXT
ARTICLE
Choosing a Freshwater Aquarium Substrate
Learn about the factors you should consider when choosing a substrate for your freshwater aquarium.