Written by Kate Barrington Updated July 11, 2018
If you like the idea of a planted tank but aren't ready to take on the extra work load, start off small with some aquatic mosses.
When you picture a planted freshwater tank, you probably imagine a tank stocked with broad-leaved plants like Amazon swords and maybe even some floating plants like hygrophila. You may, however, be less familiar with aquatic mosses. Aquatic mosses are an excellent addition to the freshwater tank and they provide a number of significant benefits in addition to enhancing your tank aesthetics.


There are a number of different aquatic mosses to choose from and most are very easy to cultivate in the home tank. If you like the idea of adding some live plants to your tank but don’t want to put up a great deal of extra effort or maintenance, aquatic mosses may be the right option for you. Read more to learn the basics about what aquatic mosses can do for your tank and which varieties are best.


What are Aquatic Mosses?


Aquatic mosses are classified as bryophytes – this name is traditionally used for all land plants that lack vascular tissue. Also included in this grouping are liverwort and hornwort plants. Because aquatic mosses lack vascular tissue, they cannot transport water and nutrients as effectively – this is why mosses do not grow more than a few inches tall. Mosses do not produce roots, but “rhizoids” that are used to attach to the surface of rocks and other structures. These plants also do not produce flowers or seeds. Rather, they produce spores which are carried by wind or water to an area suitable for germination. 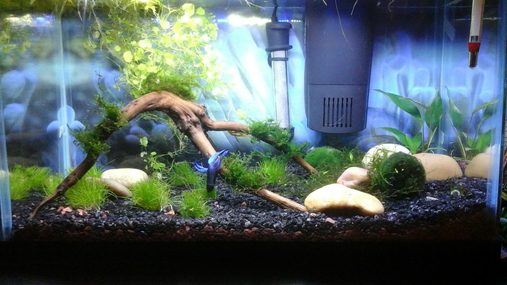 
Cultivating aquatic moss in your home aquarium may be different from cultivating traditional live plants. For example, aquatic mosses typically prefer cooler temperatures in the mid- to low-70s. Aquatic mosses can adapt to higher temperatures, but they will grow more slowly. Another requirement for cultivating aquatic moss is to provide a surface to which the moss can attach. A rough surface like driftwood or rock is ideal. To anchor moss to a surface, you can simply spread the moss out on the rock or driftwood and attach it with fishing line. You can also place the surface and the moss in the tank separately and eventually the moss will find its way there. 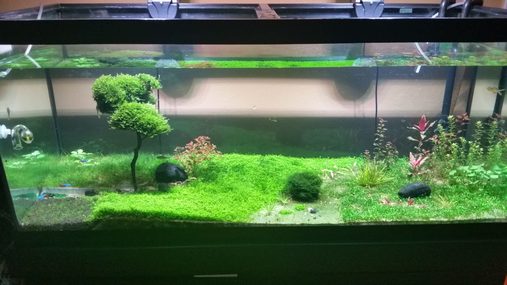 When cultivating aquatic moss, you need to be aware that some species of fish are likely to feed on it. Siamese algae-eaters, for example, are notorious for feeding on aquatic moss. Some species of freshwater shrimp are known to feed on mosses as well. If you want to ensure that your mosses are not disturbed, avoid keeping them in a tank with herbivorous species of fish. Supplementing the diet of your fish with algae wafers or fresh vegetables may also help to discourage them from eating your mosses.


There are a number of different types of aquatic mosses but some are more popular than others. Below you will find an overview of some of the most popular aquatic mosses:


Java Moss – This is perhaps the most popular type of aquatic moss and it is also very easy to grow. This moss thrives under a variety of conditions and it can be kept in tanks with either high or low lighting. Java moss is native to Southeast Asia, so it does best in warm water temperatures, though it is hardy enough to tolerate a variety of tank conditions. This moss can be rooted in substrate or anchored to rocks or driftwood.


Christmas Moss - Christmas moss is known for its tree-shaped fronds which are bright green. This type of moss requires a little more light than java moss in order to grow and it can be very attractive when attached to driftwood. If you have a fry tank or a tank stocked with freshwater invertebrates, Christmas moss provides excellent cover to protect these inhabitants from fish. This moss can tolerate different tank conditions but it grows best in cooler water under 77°F.


Singapore Moss - Singapore moss is another attractive moss species and, as you might expect, it is native to Singapore. This type of moss produces large clumps of leaves measuring about 1.3mm long with sharp points. Singapore moss is very easy to care for and it grows in different shapes and thicknesses depending on tank conditions. This species can even grow outside of the water.


Peacock Moss - Peacock moss is a newly cultivated species that resembles the tail of a peacock on display. This type of moss is very different from the other species and it prefers cooler water temperatures. Peacock moss produces triangular-shaped fronds which is another features that sets it apart from other mosses.


Weeping Moss – This species of moss is unique because it grows downward instead of upward. Weeping moss is most attractive when anchored to driftwood because it forms a carpet that extends onto the floor of your tank. This moss is a little trickier to grow because it requires a balance of nutrients or else it may become overgrown with black beard algae.


Flame Moss – This type of moss is named for its unique growth pattern. While most moss species grow sideways, this species grows vertically in a twisted fashion. Flame moss is particularly effective as a background cover though, with time, it can also be rooted to driftwood.


When it comes to cultivating aquatic mosses in your freshwater aquarium, you have many options to choose from. The important thing to remember is that the better the conditions in your tank are, the more your moss will thrive. Make the effort to maintain stable water temperature and high water quality in your tank and you should have no trouble cultivating aquatic mosses.