Written by Kate Barrington Updated May 26, 2020
Learn about common fish illnesses and how to effectively treat them.
Looking into your aquarium and seeing one of your fish ill for the first time can be alarming for many hobbyists. Unlike cats and dogs, you can’t just hop in the car and take them to the vet. Moreover, because of the delicate nature of tropical fish, if not treated quickly, the illness may not only kill the infected fish, it could spread to the rest of the tank potentially harming your entire population.

So the obvious question for fish owners when their fish is infected is, “What illness does my fish have and how can I treat it?” The good news is that many of the most common aquarium fish diseases are treatable and if done properly, your fish has a good chance of survival. Moreover, many of the treatments are relatively simple to perform (and a lot cheaper than taking a cat or a dog to the vet).

It is important to note that there are many illnesses your fish can be afflicted with and it simply isn’t possible to discuss them all here. Below you will find an outline of some of the most common diseases and illnesses, their symptoms and the best way to treat those illnesses.

Symptoms: Visible white-green threads (worms) protruding from the fish’s skin – points of attachment will show signs of redness and inflammation. Other symptoms may include rubbing against tank objects, difficulty breathing, ulcers, and general lethargy.

Treatment: Anchor worms are a type of small crustacean that burrow into the skin of fish, entering the muscles. This disease is transmitted by contact with infected fish. Dipping fish in a saltwater bath for 5 minutes up to 3 times daily to help kill the parasite. Other medicinal treatments may include formalin, potassium permanganate, or anti-parasitic medications. In addition to these treatments you should use tweezers to physically remove as many of the worms as possible. To do so, grip the worm as close to the fish’s skin as possible and carefully pull it out. After removing as many of the worms as you can, treat the tank with Stress Coat. 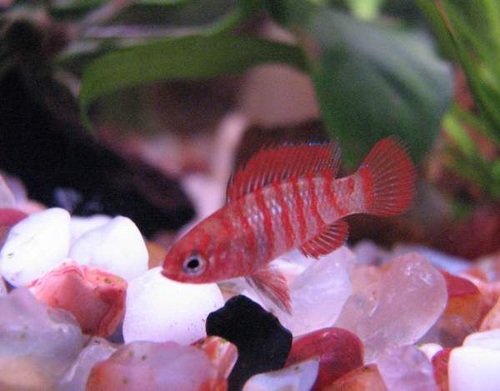 Dropsy
Symptoms: The scales on the infected fish will become raised off the body and the fish will look bloated.

Treatment: Dropsy is an internal bacterial infection and quite often, by the time the diagnosis has been made, the fish’s chance of survival is small. If caught early, there are medications that can be purchased from your pet-supply store. They may or may not be effective. Daily water changes to try and improve the water quality may also help. You can also try a salt bath, which is explained in more detail below. Dropsy is not very contagious to other fish but it may be good to quarantine any fish infected with any sort of bacterial infection.

Ich (Ichthyophtirius)- aka: White Spot Disease
Symptoms: Appears as if salt granules are on the fish’s body with heavier concentration on and around the fins. The spots are white and are raised up off the body/fins of the fish.

Treatment: Ich usually is caused by poor water quality. It is also common in newer tanks and when new fish are introduced. There is a multitude of ways to rid it from your tank, though it must be done quickly as it is contagious to other fish. Most pet supply stores have medications you can use to threat the water, all with varying degrees of effectiveness. When using the medications, be sure to remove your carbon filter as it will absorb the medication.

Symptoms: Some fish exhibit no external symptoms but those who do may show signs of open sores; bruising of the eyes, skin, gills and fins; bulging eyes; bloated abdomen; and hemorrhaging of internal organs. Infected fish may also show signs of abnormal behavior.

Treatment: This disease is caused by a virus called Viral hemorrhagic septicemia virus (VHSV) and it is spread through contact with infected fish. Unfortunately, there is no cure for this condition but secondary infections can sometimes be treated with antibiotics.

Fin Rot
Symptoms: Pretty self-explanatory. The fins of your fish appear to be rotting. The fish will normally lie on the bottom of the tank and look visibly sick, moving very little. It is contagious to other fish in the tank and commonly occurs when a fish has some sort of other infection like Ich or Cotton Wool.

Treatment: Fin rot is caused by any number of bacteria and usually begins when a fish becomes stressed. First, check your water levels as this may be an indication of why the fish become stressed in the first place. Treat your water according to your water levels. Next, purchase medications that are effective against negative organisms. Your local pet supply provider will be able to direct you to a suitable antibiotic. Remember to remove any carbon filter before using the medication because the carbon will absorb the medication. Fit rot is also believed to be a byproduct of poor nutrition, so be sure to keep your fish on a nutritional diet, but do not over-feed them. 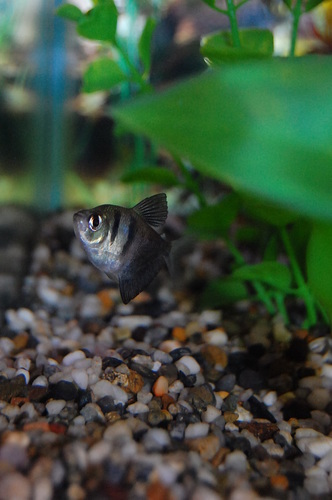 Cotton Wool - aka: Fish Fungus
Symptoms: Fish will have cotton like growths on the body, mouth, or fins. It is very similar to the appearance of fungus.   It is contagious.

Treatment: Like Fin Rot, Cotton Wool usually occurs when a fish has been stressed. It also is a result of low water quality. Cotton Wool is caused by bacteria and is easily treatable through medications commonly found at pet supply stores. Regular water changes and good general tank maintenance will also help prevent Cotton Wool from affecting your fish. It is a good idea to quarantine fish affected with Cotton Wool in a “hospital tank” as it is contagious.

Ammonia Poisoning
Symptoms: Fish appears to have red and inflamed gills and will be at the water surface “gasping” for air. Very common is new or heavily populated tanks.

Treatment: Ammonia levels rise in aquariums when organic waste begins to develop in your tank. Ammonia poisoning is easily preventable by treating water with any of the multitude of ammonia treatment products available at your local pet supply store. Ammonia is also a byproduct of overpopulated tanks. For tanks such as these, ensuring your filtration system is operating at peak efficiency and performing consistent water changes is a must. If your fish are suffering, conduct a significant water change immediately (50% - 60%). Be sure you have treated the water before you introduce it into the tank. Continue daily water changes until the ammonia levels drop back to safe levels.

Nitrite/Nitrate Poisoning - aka: Brown Blood Disease & New Tank Syndrome
Symptoms: All of the fish in the tank appear sluggish, even motionless and are just below the water surface. After testing the water you are getting high level readings of either or both Nitrite/Nitrate. Gills may be tan or brown and will move rapidly as if the fish is breathing hard.

Treatment: Anytime the ammonia levels in your tank rise, you can be certain that elevated Nitrite levels will soon follow. When bacterium oxidize the ammonia in your water, the resulting compound becomes nitrite. It is less toxic than ammonia, but toxic nonetheless. When the nitrite compound breaks down even further, it becomes nitrate. When fish are exposed to high nitrite levels, their immune system is weakened, making them more susceptible to other diseases. If left untreated, the fish will eventually die off. 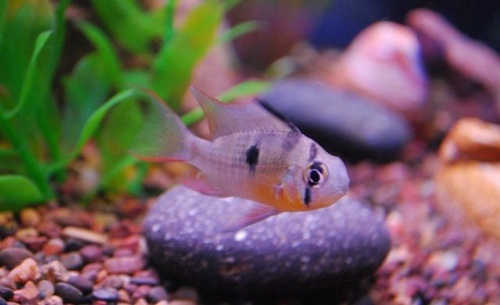 Nitrate is relatively harmless to fish and can be removed through live plant intake and regular water changes. Nitrates may not kill fish off, but high levels can create a “biological Bloom” which spikes the levels of biological matter in the water resulting in very cloudy water. To lower Nitrite/Nitrate levels conduct a significant water change (50% - 60%) and increase the aeration of your tank. Also, add 50mg of chloride salt or aquarium salt per 1 gallon of water in your tank. At this level, the salt will be harmless to the fish. Subsequent water changes will remove the salt from the water. Monitor the Nitrite/Nitrate levels and do appropriate treatments until the levels have dropped into a safe zone.

A salt bath is a very effective method to treat many of the bacterial illnesses mentioned above. Salt is effective in helping fight bacteria and parasites and can greatly increase the chances of your fish’s survival. Salt Baths are pretty straight forward to perform following the steps below.
1.     Clean a small bucket
2.     In the bucket, place 4 tablespoons of aquarium salt.
3.     Add 1 gallon of aquarium water, swirling it to dissolve the salt.
4.     Once the salt is completely dissolved, place the fish in the bucket for 5 to 30 minutes.
5.     Watch the fish closely during the bath. If it shows any signs of distress, place it back in its original tank.
Preventive Care

As is true with your own health, preventative care is always recommended to keep fish healthy and thriving. Most freshwater illnesses are caused by low water quality and general neglect from owners. Other common causes of aquarium fish diseases include pathogenic bacterial and parasites entering the tank or a poor quality diet. There are many factors that contribute to keeping your fish healthy and, conversely, many factors that can contribute to making them sick. As you may have learned from previous articles, if your fish are stressed they are much more susceptible to developing disease. Every freshwater aquarium hobbyist should learn to recognize the signs of stress in fish so they can remedy any problems with the tank quickly before their fish can fall ill.

There are many other things you can do to keep your fish happy and healthy. Keep your tank free from harmful bacteria by performing consistent water changes (15% to 20% of the tank water once a week plus a monthly 25% water change). You should also perform filtration system maintenance when necessary, switching out your filter media at least once every three to four weeks. Finally, keep your fish healthy by feeding them a high-quality and varied diet – you should also make sure to give your fish only what they can eat in less than five minutes twice a day. Performing all of these tasks will help to keep both your fish and your tank environment healthy and free from disease.
If you need more information about a particular disease, talking to other hobbyists is also a great way to help find the right treatment for your ailing fish. Ask questions to other members of the RateMyFishTank.com community in the forum sections (https://www.ratemyfishtank.com/phpbb/index.php). And remember, the best way to make sure your fish remain healthy is to perform routine tank maintenance tasks like water changes and to keep your fish properly nourished, without overfeeding. In fulfilling these needs, your fish will be happy healthy and should bring you years of enjoyment.
comments powered by Disqus
PREVIOUS
ARTICLE
The Top Commercial Foods for Freshwater Fish
The food you feed your freshwater fish will determine their health and vitality.
NEXT
ARTICLE
How to Set Up A Hospital Tank
No matter how careful you are, your fish are likely to get sick at some point during your time as an aquarium hobbyist.