THE TOP 6 FRESHWATER GOBY SPECIES FOR YOUR TANK

Written by Kate Barrington Updated May 26, 2022
Most of the gobies kept in the home aquarium are saltwater fish but there are still a few freshwater gobies that make excellent additions to the home tank.
When it comes to stocking your freshwater aquarium, you have thousands of different species to choose from. Many aquarium hobbyists (especially beginners) tend to choose common and hardy species like livebearers, tetras, and barbs. If there are so many options to choose from, however, don’t you want to go with something a little more interesting?
Choosing a more interesting species of aquarium fish doesn’t necessarily mean choosing a difficult species. Many of the most colorful and unique species of fish are actually quite easy to care for in the home aquarium. If you are looking for a new addition to your freshwater tank and you want something out of the ordinary, consider a goby. You will learn the basics about gobies in this article as well as some specific information about the top 6 species for freshwater tanks.
What Are Gobies?
The name goby is given to species belonging to the family Gobiidae within the order Perciformes. The Gobiidae family is one of the largest families of fish, containing more than 2,000 different species in over 200 different genera. Most of the fish belonging to this family remain fairly small, growing less than 4 inches in length. In fact, gobies are some of the smallest vertebrate animals in the world with the smallest species, Trimmatom nanus, growing less than 1 cm long at maturity. There are also some very large species, however, like those belonging to the genera Gobioides which grow up to 30 cm (almost 1 foot) in length. 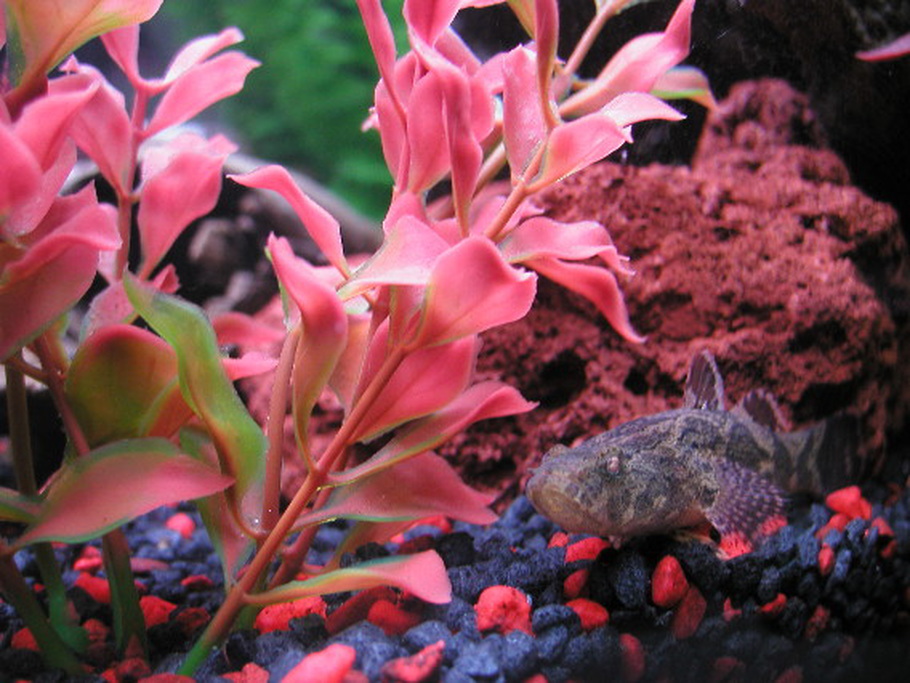 For the most part, gobies are bottom-dwellers which means that they live in the benthic zone and tend to feed on foods that drift to the bottom of the tank. Many species of goby are significant in the commercial fishing industry because they are prey for cod, haddock, and sea bass, some of the most important fish for human consumption. In the home aquarium, many of the most frequently kept goby species are marine fish but there are some freshwater species as well. In the home aquarium, gobies tend to dwell at the bottom of the tank, digging into the substrate and hiding in rockwork.
Popular Goby Species for Freshwater Tanks
As it has already been stated, most of the gobies kept in the home aquarium are saltwater fish but there are some freshwater species that can be kept in captivity. You will find descriptions of the six most popular freshwater goby species below:
Marbled Sleeper Goby (Oxyeleotris marmorata) – The marbled sleeper goby is unique because it is valued both as a source of food and an addition to the freshwater aquarium. This species is native to South America and it can grow to a whopping 2 feet long. Because this fish is so large it requires a very large tank – about 200 gallons or more. It also is a very territorial and predatory fish, so you should keep it in a tank all by itself to prevent it from eating its tank mates. When it comes to water chemistry, this species is very adaptable – it can be kept in either freshwater or brackish conditions. The diet for this species should consist of meaty foods like earthworms, shrimp, fish, and carnivore pellets.
Cobalt Goby (Stiphodon semoni) – The cobalt goby is a very attractive species that can be kept in the home aquarium. The appearance of this fish it its main draw, but its small size also lends to its popularity among freshwater aquarium hobbyists. The cobalt goby rarely grows more than a few inches long and males of the species have very attractive neon markings. This species is native to central Indonesia where it can be found in coastal streams, though its distribution may range all the way to Papua New Guinea and the Solomon Islands. The cobalt goby is best kept with small freshwater invertebrates instead of other fish and it prefers fast-moving water with very high oxygen levels and frequent water changes. This species feeds on algae and bacteria, for the most part, though their diet should be supplemented with algae wafers. 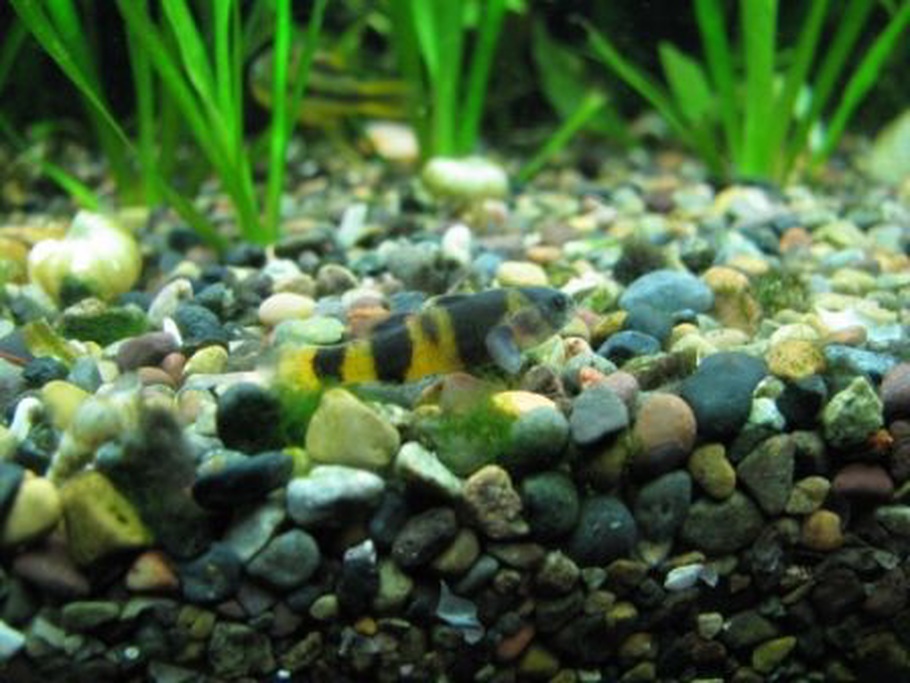 Knight Goby (Stigmatogobius sadanunidio) – The knight goby is a fairly small species that grows up to about 3.5 inches long. This speices is native to south Asia with its distribution ranging from Indonesia to India. The knight goby tends to inhabit brackish waters like estuaries and tidal zones, so it is best kept in a brackish aquarium environment. This species exhibits a gray-blue coloration with dark spots and males of the species have longer fins than females. The knight goby is hardy enough to accept a range of temperatures, though it prefers a pH between 7.5 and 8.0. This species prefers sandy substrate with rockwork decorations to use as hiding places. The diet for this goby primarily consists of live food.
Dragon Goby (Gobioides broussonnetii) – Also known as the violet goby, the dragon goby is unique because it can be found in saltwater, brackish, and freshwater environments. This species is native to parts of North and South America, ranging all the way from South Carolina to Brazil. The dragon goby has a long, eel-like body with its dorsal and anal fins running almost the whole length. This species has very sharp teeth that it uses to scrape algae off of rocks. The dragon goby exhibits a beautiful iridescent blue color with a pattern of gold blotches. This species can grow up to 24 inches long, though they rarely grow longer than 15 inches in captivity. The dragon goby are sometimes labelled as aggressive fish but they are actually quite docile and, in fact, are almost completely blind.
Bumblebee Goby (Brachygobius xanthozona) – The name bumblebee goby is actually given to a group of fishes belonging to the Brachygobius genus. The Brachygobius xanthozona is the most common representation of the genus. This speciesis named for its yellow and black coloration and it is sometimes called the golden banded goby. Bumblebee gobies remain fairly small, growing only about 2 inches in length, and they prefer to be kept in slightly brackish environments. This species is native to Vietnam and Thailand so it prefers warmer temperatures between 77 and 86°F. The bumblebee goby can live up to 5 years when kept in proper conditions.
White-Cheeked Goby (Rhinogobius duospilus) – The white-cheeked goby is native to Vietnam and China where it can be found in both freshwater and brackish environments. This species remains very small, growing to a maximum length around 2 inches – for this reason, it is sometimes called the dwarf dragon goby. The white-cheeked goby can be found in freshwater streams, so in the home aquarium it prefers high oxygen levels and fast-moving water. This species also prefers fairly low water temperatures so they are best kept in an unheated tank. White-cheeked gobies feed on small, meaty foods and they generally do not accept flakes or pellets.
If you are thinking about adding some fish to your freshwater tank, take a moment to think about freshwater gobies as an option. There may not be as many species to choose from as there would be if you had a saltwater tank, but there are still some great options to consider. If you want to add gobies to your freshwater tank, think about some of the species described above.

comments powered by Disqus
PREVIOUS
ARTICLE
Caring for the Plecostomus in the Freshwater Tank
The plecostomus is one of the most popular species of algae eater for the freshwater tank.
NEXT
ARTICLE
Tips for Keeping Shoaling Species in the Aquarium
Nothing makes an aquarium stand out like a large shoal of colorful fish.