STOCKING YOUR TANK WITH SCHOOLING FISH

Written by Kate Barrington Updated May 01, 2014
Adding a school of colorful fish to your tank can take it from drab to fab -- read on to learn more about schooling species.
Have you ever seen underwater footage of schooling fish? It is amazing how they can move with such efficiency and rhythm while staying so close together – mimicking and following each other’s movements. While you may not be able to host a giant school of fish in your home, you can create a smaller school (or shoal) in your home tank. Schooling fish do more than give you a source of entertainment – they can also enhance the appearance and activity of your entire tank. Read on to learn more about adding schooling fish to your tank.


Why Do Fish Form Schools?


Many species of animals live in groups to protect themselves from their enemies – especially when the animals are small and vulnerable on their own. This is definitely the case with fish in their native environment. Think about it – a predator would have a much easier time chasing down and eating a single fish swimming by itself than it would singling out a single fish from a large group. Territorial defense is also easier in numbers – a potential rival might balk at the idea of facing a large group of fish as opposed to a single fish. Some scientists have also posed the idea that swimming in large groups reduces energy expenditure for fish and that it makes finding food easier (with more pairs of eyes on the lookout). In terms of breeding, a large school spawning together stands a greater chance of some of their eggs hatching simply due to the large number of eggs laid in a single area. 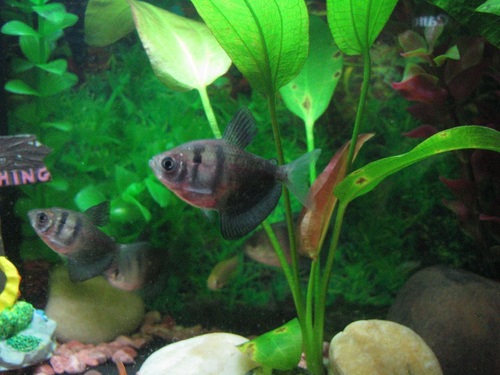 Schooling is a very common behavior among fish and it is estimated that as many as 80% of fish live in a school at some point. Small fish and newly hatched fry tend to spend more time in schools than larger fish who can fend for themselves, though some large species do tend to school. For fish, schooling isn’t quite as simple as just gathering with a group and swimming in the same area. Schooling fish swim extremely close together – so close that you might wonder how they do not get in each other’s way. Scientific studies have shown that the leader of the school influences the movements of the rest of the fish – the other fish take cues from the fish around them, responding to various stimuli around them. It also makes sense in regard to the anatomy of fish – they have eyes on the sides of their heads so they can easily see what is on either side of them.


In many cases, the terms “schooling” and “shoaling” are used interchangeably but there is a difference between the two. The term schooling refers to the practice of a group of fish swimming in the same direction in a coordinated manner. Shoaling, on the other hand, occurs when an aggregation (group of fish) gathers for social purposes. Whereas schools of fish are primarily comprised of a single species, an aggregation or shoal may be an unstructured group of mixed species.


Think of it this way: a group of children on a field trip would be similar to a group of shoaling fish because they are all moving in a similar direction but have the freedom to remain somewhat independent. A troop of marching soldiers, however, would be more akin to schooling because they are all moving in one direction in a coordinated manner. As shoals become more organized, they develop into schools. It is estimated that about 25% of fishes shoal for all of their lives and about 50% shoal for part of their lives.


Not all fish are schooling fish, but most of the fish that do prefer to live in schools are “community fish” – that is, they tend to get along with a wide variety of species and are generally not aggressive or territorial. Some of the fish most likely to live in schools include danios, barbs, tetras, some loaches, hatchetfish and rasboras. Below you will find a list of schooling fish recommended for freshwater tanks:


Rummynose Tetras:  The rummynose tetra is perhaps the most popular schooling fish. They may not be as colorful as some other tetras, but they tend to school tightly and are amazing to watch in action. Some say that the brightness of the red nose on these tetras can be used as an indication for water quality.


Harlequin Rasboras:  The harlequin rasbora is named for the black triangular patch found on its body near the fin. These fish tend to thrive in groups of six or more, though larger schools are definitely appreciated. This species is fairly adaptable which makes them a good choice for beginners.


Cardinal Tetras:  These fish only grow to a maximum size around 2 inches but they are known for their bright blue and red coloration. Cardinal tetras can bring a great deal of color and movement to your tank and they are particularly striking in groups of 10 or more. 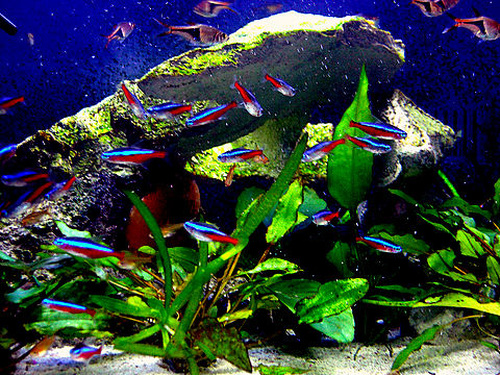 Zebra Danios:  Zebra danios have long, streamlined bodies and they can have either long or short fins. These fish are silver in color with dark blue/black horizontal stripes like a zebra. What makes these fish fun to watch is their quick darting around the tank.


Clown Loaches:  These fish tend to dwell on the bottom of the tank but that doesn’t mean they don’t appreciate a school of their own kind. What makes these fish stand out is their striking black and orange coloration and their unique body shape. Keep in mind, however, that the clown loach can grow up to 12 inches long, so they are only recommended for very large tanks.


When creating a community tank, schooling fish are a staple. These fish do particularly well in groups with their own species and they tend to get along with other fish as well as long as the other species aren’t overly aggressive or predatory. While you are getting the hang of your community tank, you would do well to stick with hardy species of fish – the hardier the fish, the more adaptable they will be to various tank conditions. You should also be sure to provide plenty of open swimming space and enough hiding places to accommodate all the fish in your tank. As long as you cater the tank to the needs of your fish and follow these simple guidelines, you should have no trouble establishing and maintaining a healthy community tank!