Written by Kate Barrington Updated April 06, 2018
If you are interested in cultivating a peaceful tank full of multiple species, don't choose these fish.
There are no such thing as bad fish, just owners who have not done proper research before purchasing them. “Community” tanks can be constructed in a variety of ways, it just depends on what kind of community you want. For example, Lake Malawi cichlids, when kept in the appropriate water parameters and in the correct set up, can create an active and interesting social community. This is also true for aggressive fish such as the red-tailed black shark, or shy and sensitive fish like celestial danios. The key is to read up on the conditions that a fish will prefer before buying it.


Realistically, most people want a bright and active tank with many different types of fish in it, and will just walk down the “community” isle of the local fish store picking out favorites. If this is your technique, here is a list of common community choices that are not well suited for a standard community tank – it may be because they require special water conditions in order to survive, they might be extremely sensitive to water quality, they are subjected to inhumane practices or are just generally difficult to keep alive and happy. For a list of fish that grow too big for a standard tank, please see “Top 10 worst tank busters”.

The 10 worst community fish are:

10. Plecos
Plecostomus, often called “plecos,” are a very popular fish and they make a wonderful addition to the freshwater aquarium. This may be true, but there are still some major drawbacks to keeping them. Common varieties can grow to be a foot long and they produce massive amounts of waste -- even smaller ones can still manufacture disproportionate levels of waste.  You can basically double the bio-load of your community tank by adding one of these fish. In addition to that, some plecos don’t consume very much algae and may preferentially shred plants and driftwood. You should also keep in mind that while juvenile plecos are considered a community species, they often become aggressive as they grow. 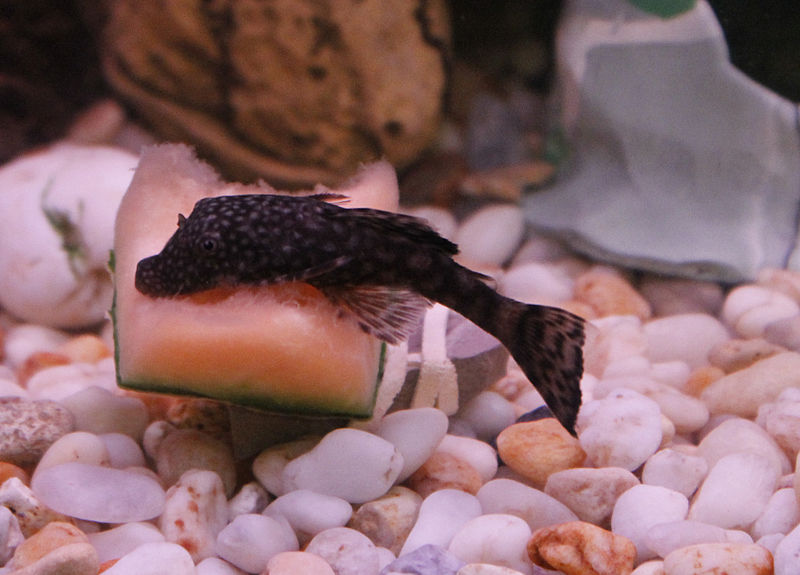 9. Glass catfish
These little guys look like they could add visual interest to any community aquarium because of their uncommon appearance. Their bodies are transparent so that you can see right through their skin and muscle to their bones – quite a striking sight! This would make for a fascinating addition to your aquarium – that is, if you ever saw them. The are terribly shy, and require medium sized shoals (7-10 fish) in order to be even remotely comfortable. Even then, however, the entire group will probably spend most of their time hiding behind your decorations, plants and filter inlet. Unless you have a refined appreciation for subtlety in your aquarium, you should look for a bolder substitute. Additionally, they are very fragile fish, and can perish easily both from instable water conditions and from bodily injury.

8. “Fancy” guppies
Fancy guppies are extremely appealing for a community tank because they are friendly, small and come in a range of brilliant colors and striking patters. Unfortunately, most guppies can barely survive the trip home from the pet store.  Decades of selective breeding has resulted in stocks that are inbred and weak, and males seem to fair particularly poorly. There are alternatives however – “feeder” guppies can actually be quite pretty, and if you allow them to breed for several generations visually appealing traits often intensify. If you choose to bring home feeder fish however, quarantine them before introducing them to your community tank as they may harbor diseases.

7. Angelfish
While these fish can make graceful and elegant centerpieces in a tank, they are not well suited for a community atmosphere. Angelfish, a species of cichlid, are aggressive to their own species and need to be kept in breeding pairs or in large groups. Keeping them in small groups will allow for the strongest to bully the weakest fish, sometimes to death. As they get larger, they may pick off smaller fish for food. They also prefer specialized conditions in order to thrive. They are sensitive to water quality, and need a slightly acidic pH (6.5-7), low hardness and a warm temperature (~80F). Additionally, the long fins of these fish make the irresistible to common community species such as the black skirt tetra who will chase and nip them which can increase their risk for bacterial and fungal infections.


6. Discus
These fish, like angel fish, are beloved for their bright colors and interesting personalities. Also like angelfish, they require special water parameters – soft, stable, slow moving and warm water. They are shy around other species of fish and can be easily outcompeted for food. They actually will do best when kept in species-specific tanks with lots of space to swim around in and a calm environment in which to interact with conspecifics.

5. Dye injected fish
If you’ve paid a visit to your local pet store recently you may have come across neon or dye-injected fish. These fish look like normal tetras, danios or glassfish but with bright, unnatural colors. The practice of injecting dye into fish is considered inhumane and can greatly reduce the lifespan of the fish due to stress. The popular trend Glofish, however, involves genetic alteration rather than the injection of dyes. Think carefully before using any of these fish in your tank because they may not be as hardy as traditional community fish and could end up spreading disease.

4. Dwarf gouramis
Gouramis are elegant, beautiful fish that when kept with proper tank mates can be an excellent component of a community tank. However, gouramis of the dwarf variety, usually colored powder blue, royal blue or red, can cause huge problems. These little Napoleons can be quite aggressive, and males often bully each other (as well as everyone else). Additionally, dwarf gouramis frequently carry diseases that can quickly kill other fish. If you are looking for an alternative, keep pearl or honey gouramis (in groups, with 2 females to every male) and be sure to avoid the chocolate gouramis (too sensitive) and larger species like kissing gouramis (too aggressive).

3. Goldfish
Though they are a common “beginner” fish that frequently end up in bowls, tiny tanks or just mixed in with other fish, goldfish are not suited for community tanks for a variety of reasons. This is a group of fish that have been neglected and misunderstood for decades. They require cold water with no heater and their high oxygen requirements make them incompatible with most other fish (and make the standard goldfish bowl completely out of the question!) They also grow quite large, so if you would like to keep goldfish, place them in an outdoor pond.

2. Freshwater eels
Eels are inappropriate for community aquariums for a variety of reasons. Many species grow to be over a foot long (some exceed several feet) and they are difficult to care for. Eels are esteemed escape artists – they love to climb into filters or slip up and out onto the floor. Many species are also sensitive to water quality and they require special substrates that will prevent them from scraping and damaging their skin. Some species are also very shy and easily frightened, preferring to burrow into the sand to stay out of sight. Additionally, they can be difficult to feed, many species prefer live food and will eat (or try to eat) their tank mates.

1. Freshwater Sharks
If you have read The Top 10 Worst Tank Busters, you are already familiar with some of the dangers of keeping certain freshwater sharks in the home aquarium. The worst offender is the Bala Shark – largely because novice aquarium hobbyists simply do not realize how big these fish get. Freshwater sharks are often sold as juveniles and advertised as community fish. What you may not realize is that they can quickly outgrow the community tank and turn into large, aggressive fish. If you want to avoid having to sell your fish back to the pet store or buy an entirely new aquarium, avoid freshwater sharks.

Dalesbala by Dale via Wikimedia Commons


A word about brackish fish…

The term “brackish” applies to water that is a mixture of freshwater and saltwater. Natural brackish environments are found in saltwater swamps and in coastal areas – the fish that live in these habitats have adapted to changes in salinity. Many fish in this category are incorrectly sold as freshwater community fish. Bumblebee gobies are a common example - they very tiny and calm, making them appear to be an excellent component to a community tank. However, they require salt to be added to their water, and if these fish are kept in a freshwater environment they will fail to thrive and eventually (or quickly) die. This is also true for the less common species of “freshwater fish” including dragon gobies, monos (which also get to be 10 inches), archers and scats as well as small flounders and many puffer species.


Tips for Selecting Community Fish
When it comes to selecting the fish for your community tank, you may be tempted to simply walk into the pet store and pick out what you like. While this may work for certain groups of fish like livebearers and tetras, it will not work for all species. If you really want to do a community tank right, you need to pick species that have similar needs in regard to tank parameters and diet. You should also plan to buy most of your fish at the same time – even if you buy schooling species, if you try to add more fish later they could have trouble fitting in. Like most animals, even community fish develop a sort of hierarchy – a pecking order – especially when it comes to feeding.


Luckily, you have many different species to choose from in stocking your community tank. This doesn’t mean, however, that you can make the decision lightly – you still need to do your research and be responsible about it. Many community fish are very hardy and peace-loving so they will not be difficult to keep. As long as you choose species that are compatible in terms of water conditions, you should be fine.


comments powered by Disqus
PREVIOUS
ARTICLE
The Top 10 Worst Tank Busters
Find out which fish will rapidly outgrow your tank, and the smaller alternatives that are available.
NEXT
ARTICLE
The Basics of Freshwater Fish Compatibility
Whether you are new to the aquarium hobby or not, there are a few things you should know about freshwater fish compatibility.