THE 15 MOST POPULAR TYPES OF GOLDFISH

Written by Kate Barrington Updated May 26, 2022
Popular as prizes at carnivals and state fairs, goldfish are known for their orange-gold coloration, but they actually come in many colors and patterns. Read more to learn about the 15 most popular types of goldfish.

Easily one of the most popular aquarium fish, goldfish are freshwater fish belonging to the carp family. Native to East Asia, these fish are named for their bright orange-gold coloration, but they come in a wide variety of colors and patterns. Like betta fish, goldfish have been selectively bred for many sizes, body shapes, fin configurations, colors, patterns, and tail types.

Here’s what you need to know about the X most popular types of goldfish.

15 Types of Goldfish You Should Know

The goldfish (Carassius auratus) is a type of freshwater fish belonging to the family Cyprinidae – the carp family. They are freshwater fish native to East Asia that have been selectively bred for over 1,000 years. Goldfish can be kept indoor in aquariums or outdoors in ponds where they can grow up to 14 inches long and up to 2 pounds in weight, depending on the variety.

Here are 15 popular types of goldfish you should know about:

The common goldfish is often referred to as a feeder goldfish because they are commonly sold for this purpose. These goldfish are typically gold, yellow, or white and they typically grow to a length of 10 inches or more in favorable conditions. Common goldfish are compatible with other types of goldfish as well as peaceful community fish with similar care requirements.

Though similar in appearance, the comet goldfish is shorter and leaner than the common goldfish. This breed also has a distinct long, widespread tail with pointed tips. Because their tails are larger, comet goldfish may require more space than common goldfish, but they come in a wide range of colors which makes them a popular choice. These goldfish grow 10 to 12 inches in length and do best in a 15- or 20-gallon tank with other goldfish or peaceful community fish.

Also known as the American Shubunkin, this type of goldfish is nearly identical to the comet goldfish except for its calico patterning. These goldfish exhibit a spotted pattern in a mix of colors including orange, white, blue, and black. You can find Shubunkin goldfish with different tail types as well including longfin Shubunkin and Bristol Shubunkin which have heart-shaped tails.

A type of “fancy” goldfish, the fantail goldfish has an egg-shaped body, an elongated dorsal fin, and a flowy tail. Many consider the fantail goldfish the European version of the Ryukin goldfish. Technically speaking, fantails are a type of double-tail goldfish and they are a little more complicated to keep than common goldfish but still very beginner-friendly. These fish grow 6 to 8 inches at maturity and come in a variety of colors including orange, red, white, and calico.

The Ryukin goldfish is considered the Eastern version of the fantail goldfish – the primary difference between the two is the body shape. Ryukin goldfish are fairly tall with a shoulder hump right behind the head which often makes this breed taller than it is long. These goldfish have a slightly pointed head which is unique among fancy goldfish and their tails can be very long as well – sometimes twice as long as the body itself. Ryukin goldfish can be solid color, bicolor, tricolor, or calico. 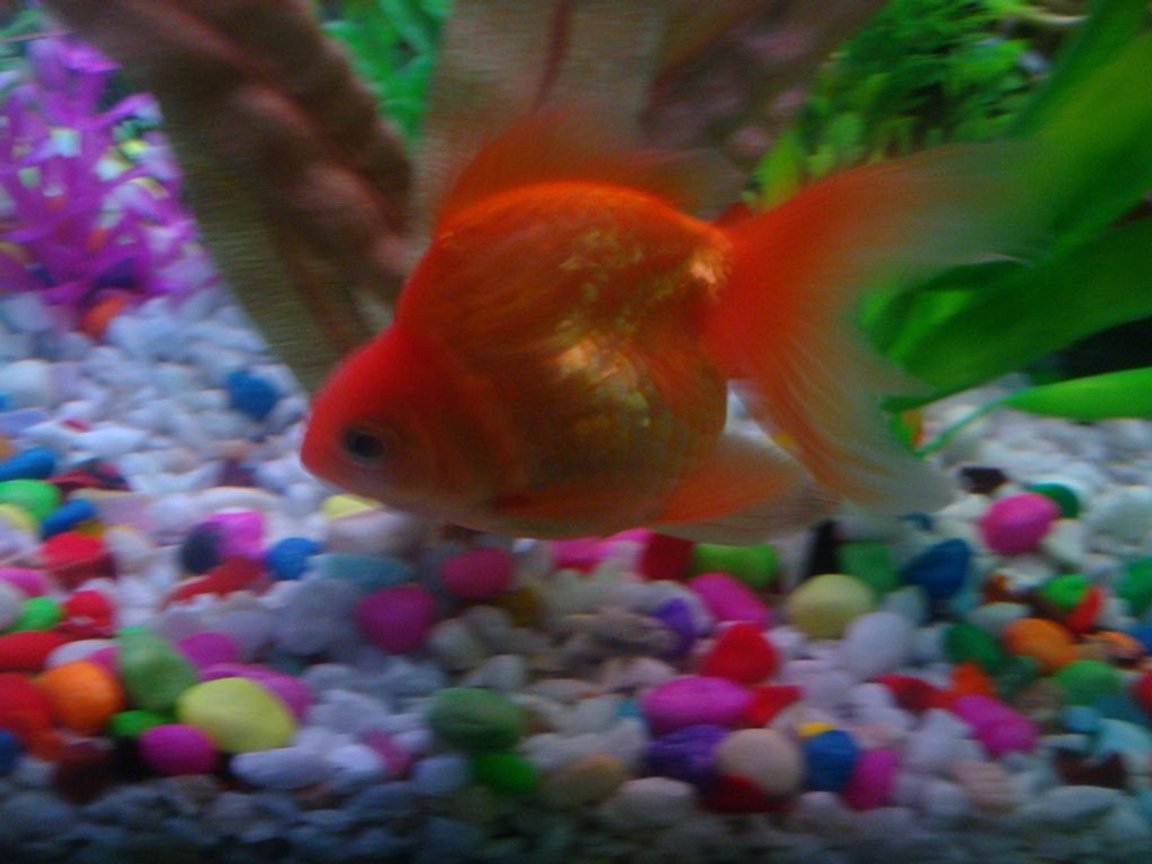 Perhaps one of the strangest goldfish varieties is the pearlscale goldfish. These goldfish are very round, almost golf ball-like in shape, and they have very thick scaling that makes them look like they’re covered in pearls. This unique feature is due to high levels of calcium deposited under the scales which makes them stand out from the body. Pearlscale goldfish grow up to 6 inches in length and come in a variety of colors including red, white, blue, black, chocolate, and calico.

Another strange-looking goldfish variety is the bubble eye goldfish. These fish have water-filled sacs under the eyes which grow along with the fish. Because these fish require special care, they generally aren’t the best choice for beginners. First and foremost, you’ll need to make sure your aquarium doesn’t have any sharp objects in it and you should place a sponge around the filter intake.

Another goldfish variety with unique eyes is the telescope eye goldfish. This breed has round, protruding eyes which, while less fragile than bubble eyes, still require special care. Aside from their telescope eyes, these goldfish are very similar in appearance to fantail goldfish but slightly smaller. They also look similar to Black Moor goldfish which have dome-shaped eyes that aren’t completely telescopic.

This type of goldfish has unique eyes similar to the telescope eye goldfish, but their eyes point upward instead of to the side. Another unique feature of this type of goldfish is the lack of a dorsal (back) fin. Celestial eye goldfish have been around since the 18th century and can make for a very interesting addition to the home aquarium. Just keep in mind that their strange eyes means their vision is fairly weak – they may not be able to compete for food with other fish.

Also known as the Jikin goldfish, the peacock goldfish is a rare color morph from Japan. This goldfish type has a longer body like the common goldfish but a widespread tail. Jikin goldfish are most known for their unique color pattern. They are always bicolored red and white, but the red is only permitted on the tail, fins, lips, and gill covers. This breed grows up to 10 inches and requires a fairly large tank – at least 20 gallons with an extra 10 to 20 gallons per adult.

One of the most easily recognized fancy goldfish is the oranda goldfish which was selectively bred for a fleshy mass known as a wen on the top of its head. When they are first hatched, goldfish fry look like fantail goldfish but they develop a wen as they age. Though this breed may not be the most beginner-friendly, they are one of the hardier breeds of goldfish – especially when they are young and the wen is small. 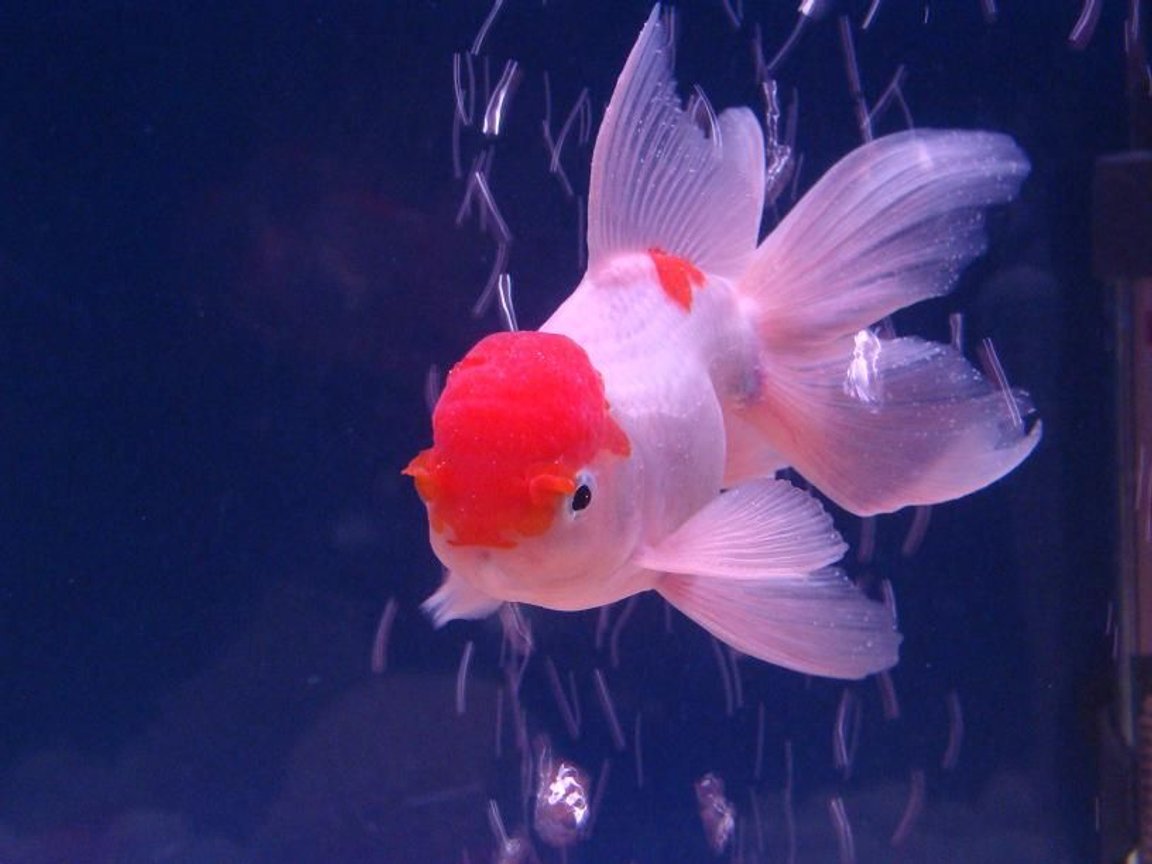 One of the oldest breeds of goldfish, the ranchu is also known as the “king of the goldfish” in Japan because they are very highly valued. These goldfish closely resemble lionheads, but their hood is less prominent and their backs broader. This type of goldfish also lacks a dorsal fin, so they may do best in a warmer aquarium with similar kinds of goldfish.

Goldfish make wonderful pets but, like any living thing, they require a certain degree of care. Unfortunately, many people misunderstand the requirements of goldfish given they are often used as prizes at carnivals and fairs. Just like any aquarium fish species, goldfish require adequate space and high water quality to thrive. Learn more about caring for goldfish here.

comments powered by Disqus
PREVIOUS
ARTICLE
Everything You Need to Know About Nerite Snails
Looking for an addition to your freshwater cleanup crew?
NEXT
ARTICLE
Spotlight on the Wolf Cichlid
The wolf cichlid is a large, aggressive species but makes a perfect option for a show tank.