TIPS FOR KEEPING SHOALING SPECIES IN THE AQUARIUM

Written by Kate Barrington Updated May 26, 2022
Nothing makes an aquarium stand out like a large shoal of colorful fish. In this article you will receive tips for cultivating shoaling species in the freshwater tank.
If you are thinking about starting a new aquarium or simply need some ideas for stocking an existing aquarium, consider choosing a shoaling species. Nothing is more beautiful than a large group of colorful freshwater fish swimming in unison in the community tank. The beauty of shoaling fish is that while they do swim in groups, they still retain their own individual identities.
Keeping shoaling fish in the home aquarium can be a challenge because some shoaling fish do not get along with other species. It can also be challenging to maintain the health and nutrition of such a large group of fish. If you are thinking about adding shoaling species to your tank, take the time to learn everything you can about them before you begin.

Before getting into the details about species of shoaling fish, you should be able to tell the difference between a shoaling species and a schooling species. When you see a large group of fish swimming in one direction, you probably assume that they are schooling. In fact, shoaling is very similar to schooling but there are some key differences. According to the popular definition, groups of fish that swim together for social reasons are said to be shoaling while fish swimming in the same direction in a coordinated manner are said to be schooling. In the wild, both shoaling and schooling behavior can be a defense mechanism used against predators. A large group of fish moving in one direction might appear to a predator as a single large fish – moving in a group also reduces the likelihood of any individual being caught by the predator. 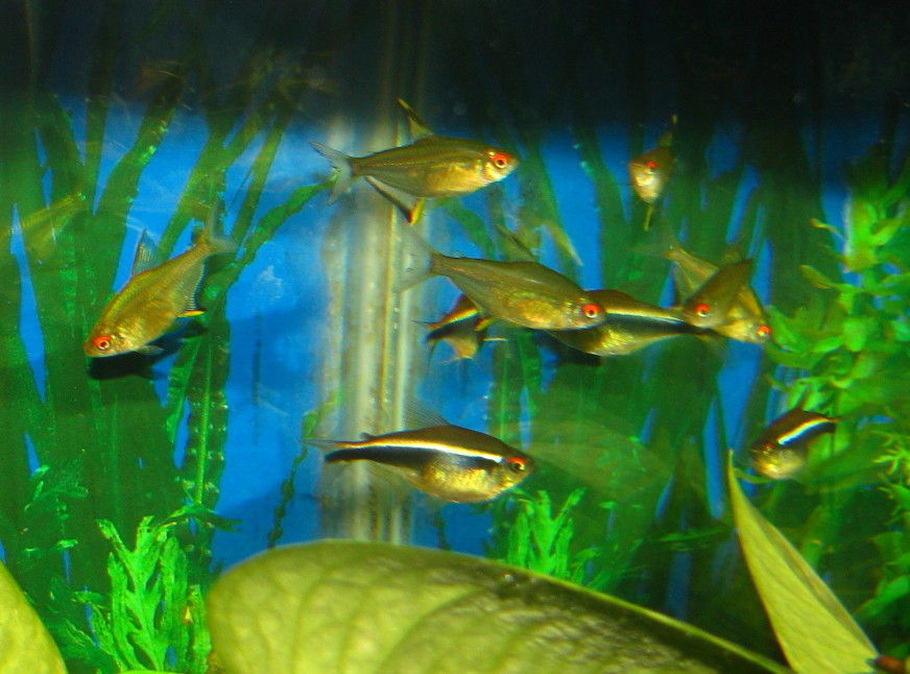 To help you further understand the concept of shoaling, try to imagine a large group of people walking in the same direction on a sidewalk. Those people might be moving in a large group, but each individual moves at his own pace. The individuals in the group are aware of each other and move together in a loose way. Now think about a marching band or a group of soldiers – they too move in a group but their actions are much more coordinated. This is an example of schooling behavior. Another difference between schooling and shoaling is that a shoal is more likely to contain fish of varying size and species while a school is usually comprised of a single species of fish that are all the same age or size.

Neon Tetras – Not only are neon tetras one of the most popular species among freshwater aquarists, but they are also a great shoaling species. These fish only grow to about 1 ½ inches in length and they are known for their bright silver bodies and red-striped tails. Neon tetras come from South America, so they prefer warmer waters with a pH beteween 5.0 and 7.0. This species does best when kept in a shoal of 10 to 12 of the same species.

Marble Hatchetfish – Hatchetfish are classified as a surface fish because they tend to shoal in the upper region of the tank. Marble hatchetfish are known for their unique coloration and body shape – they have slender body with a deep belly that mimics the shape of a hatchet and they have a marbled pattern on their brown bodies. These fish grow up to 2 inches in length and they prefer warm waters and a pH between 5.5 and 7.5. 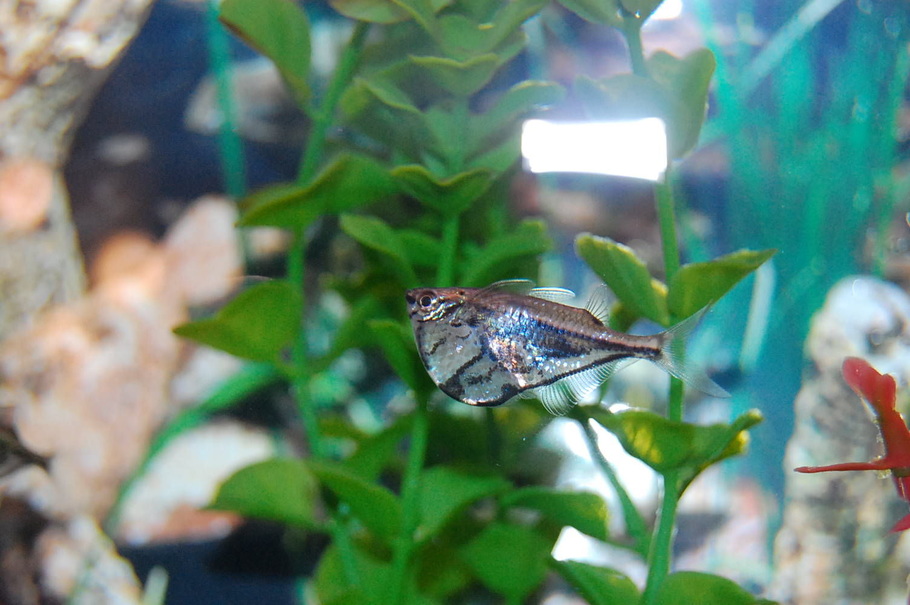 Tiger Barbs – The tiger barb is a semi-aggressive species that grows to about 3 inches in length. These fish are omnivorous feeders and they tend to keep to the middle region of the tank. Tiger barbs need a varied diet of flake, frozen, and fresh foods and they should be kept in large shoals with 8 to 9 of their own species.

Zebra Danio – The zebra danio is named for its bright silver body ornamented with metallic blue stripes. These fish grow to about 2 inches in length and they are a great starter species for beginning aquarium hobbyists. Zebra danios inhabit the middle regions of the tank and they should be kept in shoals with at least six of the same species.

Cherry Barbs – This species is named for its cherry-red coloration. Cherry barbs are a very peaceful species that grows up to 2 inches in length. These fish follow an omnivorous diet and they should be kept in groups with at least six of their own species. This species prefers warm waters with a pH between 6.0 and 7.0.

These are just a few of the many shoaling species out there. Before you select a species for your tank, make sure to do your research and cater the conditions in your tank to the needs of your fish for the best results.

In order to keep your shoaling fish healthy and happy, you need to offer them a high-quality diet. The type of food you offer will vary depending on the species of fish you choose to keep, but most shoaling species will accept a wide variety of different foods. To ensure that your fish have their basic nutritional needs met, start with a high-quality commercial flake food. You can then supplement this staple diet with various live, frozen, or freeze-dried foods. Adding rich foods like brine shrimp and bloodworms to the diet of your shoaling fish will help to maximize their coloration. These effects will be compounded when your fish swim together in a large shoal. 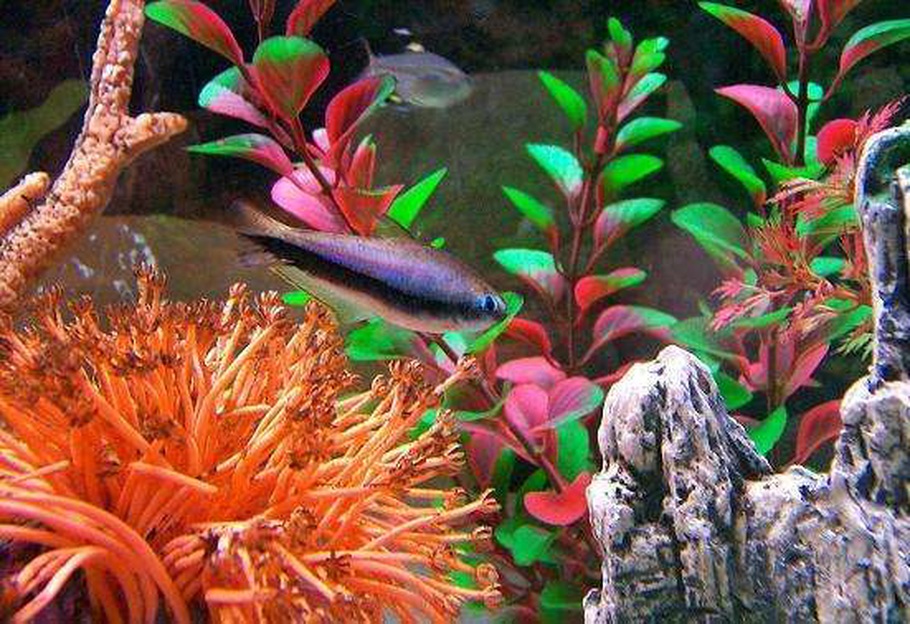 In addition to being mindful about what you are feeding your fish, you also have to think about how and how much you are feeding them. Do not assume that because you have a large shoal of fish in your tank you need to feed your fish large quantities of food. Overfeeding can lead to a number of problems in the freshwater aquarium including high ammonia levels and low water quality. Your best bet is to feed your shoaling fish small quantities of food once or twice a day. Only offer your fish as much as they can consume in a 5-minute period of time. If you offer your fish sinking wafers, remove any uneaten portion of the wafer within an hour before it starts to decompose.

Aside from maintaining a high-quality diet for your shoaling fish, you also need to keep your tank water clean. The more fish you keep in your tank, the more waste will be produced. This, added to the decomposition of uneaten food, can lead to increased ammonia levels and reduced water quality if you are not careful. In order to keep the water quality in your shoaling tank high you need to make sure you have a powerful filter in place and keep up with your weekly water changes. Replace your filter media every 3 to 4 weeks as needed and test your tank water on a weekly basis to make sure your water chemistry is within the proper range.

Keeping a large shoal of fish in your freshwater aquarium can transform your tank from boring to beautiful. Just be sure to do your research and make sure that your tank conditions match the requirements of your shoaling fish.

comments powered by Disqus
PREVIOUS
ARTICLE
The Top 6 Freshwater Goby Species for Your Tank
Most of the gobies kept in the home aquarium are saltwater fish but there are still a few freshwater gobies that make excellent additions to the home tank.
NEXT
ARTICLE
Species Profile: Blind Cave Tetra
The blind cave tetra is unique among freshwater aquarium fish.