THE PROCESS OF CYCLING A FISH TANK

Written by Kate Barrington Updated April 29, 2019
What is "cycling" your fish tank? Why is it important? Instructions for how to do-it.
If you have never owned a fish tank before, you may be overwhelmed by the sheer volume of information available on the subject. You have probably heard terms like “water quality” and “cycling” thrown around but may still be figuring out what those things mean. The term “cycling” typically refers to the nitrogen cycle in the home aquarium. This is the process through which beneficial bacteria break down accumulated waste, converting toxins like ammonia into less harmful substances like nitrite and nitrate. Because ammonia is toxic to aquarium fish, it is essential that the nitrogen cycle be established in your tank – without it, your fish could become very sick or die. Because the nitrogen cycle is so important, it is one of the first things you should learn about when preparing your start your own aquarium.
GETTING STARTED
Cycling your fish tank is not difficult, but it does take some time – there are also several different methods you can use. In this section, you will learn what cycling is, how you do it, how long it will take, the number of fish needed, and much more! 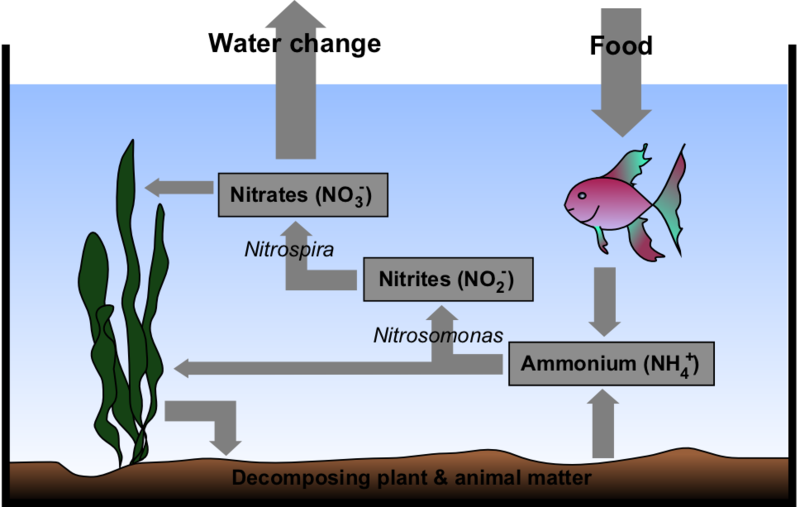 
What Is Cycling The Tank?
Unfortunately, many people have never even heard of cycling and if they have, many ignore it. However, if you want to ensure your fish live in a healthy environment, it is imperative.
ADDING FISH
One way to cycle a freshwater fish tank is to start with a small number of relatively hardy fish. As the fish eat, they will produce waste which will supply the nutrients beneficial bacteria need to grow and reproduce. To do this properly, we have provided guides for you to follow:

To cycle your fish tank, start with the following steps:
Other Options
In recent years, methods of “fishless cycling” have become increasingly popular. Some hobbyists suggest that using fish to cycle the tank may actually be cruel since it involves subjecting the fish to an environment that can be considered toxic and unhealthy. There are, however, just as many hobbyists that support cycling a tank with fish as those who support fishless cycling. Methods of fishless cycling may involve “seeding” the tank with fish food to provide nutrients for beneficial bacteria to grow. Another option is to add live bacteria to the tank to jumpstart the nitrogen cycle. To learn more about fishless methods of cycling your tank, read this article.


comments powered by Disqus
PREVIOUS
ARTICLE
How to Make Your Own Tank Divider
There may come a time during your career as an aquarium hobbyist that you need to divide your tank.
NEXT
ARTICLE
Aquarium Water Test Kits
The key to keeping your aquarium fish happy and healthy is to maintain high water quality.