THE TOP 5 TETRAS FOR BREEDING IN THE HOME AQUARIUM

Written by Kate Barrington Updated May 25, 2021
Breeding aquarium fish can be tricky, but with the right tank setup and preparation it can be done. Read on to learn about the top 5 tetras for breeding and how to do it right.

Tetras are a group of small freshwater fish that come in a wide range of colors. These fish are great for beginners because they are typically easy to care for and most species get along well with tankmates.

What may not be so easy about keeping tetras is encouraging them to breed. Compared to livebearers like swordtails and guppies, tetras are much trickier to spawn, though it certainly can be done. It takes a certain tank setup and dedicated care to protect fry until they are big enough to fend for themselves.
In this article, we’ll explore the subject of setting up your tank for tetra breeding and provide tips for spawning and caring for the fry. We’ll also provide an overview of the top 5 tetras for breeding.
Setting Up the Tank for Success
When you think about fish that are easy to breed, species like swordtails, cichlids, and guppies come to mind. Compared to these fish, tetras are not “easy” to spawn. There are, however, some species of tetra that are easier to spawn than others and, with the right setup and care, it can be done.
A single pair of tetras is capable of producing several dozen eggs in one spawning attempt, but you have to start with the right tank setup and proper conditioning. The best thing to do is condition a school of tetras in a community tank using high-quality flakes and freeze-dried foods. If you really want to accelerate the process, use live foods like worms and daphnia. 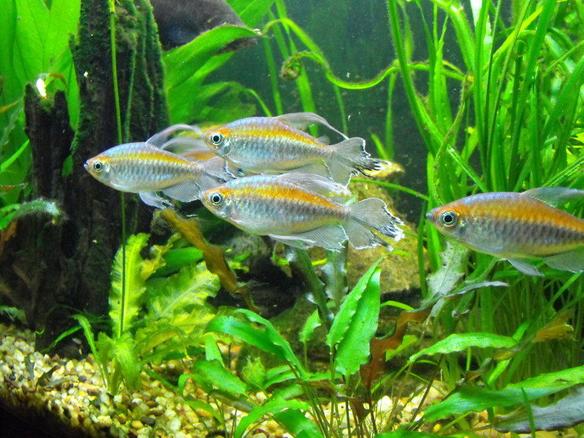 After a few days, start checking to see if the fish are ready to breed. Females that are ready to spawn will be full with eggs a few hours after feeding. Another way to check is turning on the lights an hour or so before feeding and checking to see if the fish are courting or spawning in the community tank.
The ideal breeding tank for tetras is 2 1/2 to 5 gallons with a bare bottom. Fill the tank with water from the community tank and use an air-driven sponge filter for water movement. If you can keep the tank temperature in the mid-70s without a heater, it is perfectly adequate, though a small submersible heater will help the eggs and fry develop. Place a spawning mop or a large mass of java moss for the fish to scatter their eggs, covering at least 3/4 of the tank bottom.
Spawning and Caring for the Fry
When it comes to spawning, the first thing you need to remember when breeding tetras is that most species are egg scatterers – this is why it is important to cover the tank with java moss or a spawning mop. Add the female to the spawning tank and let her stay there by herself for two days, feeding her very little during that time.
Spawning behavior in tetras begins the night before spawning occurs. To trigger spawning, perform a 50% water change using aged, slightly cooler water then add the male to the tank after the water change. Turn off the tank lights and cover the tank with a dark towel. In the morning, uncover the tank and turn on the lights but don’t disturb the fish for a few hours before you check for eggs. Tetra eggs are usually small and clear – you may need a flashlight to find them. 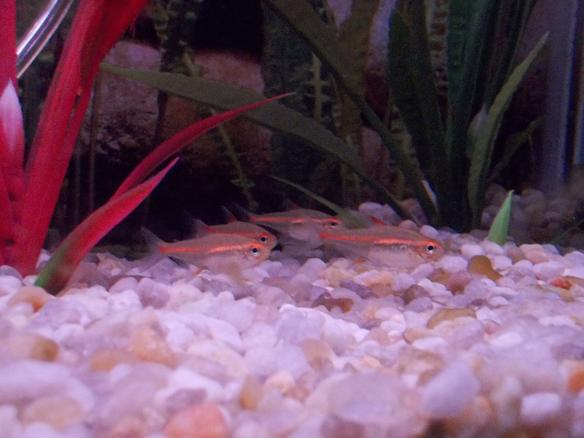 If the pair hasn’t spawned, leave them alone and check again in a few hours. If they haven’t spawned by the end of the day, turn off the lights and try the next day. After eggs are scattered, remove the pair back to the community tank right away so they don’t eat the eggs. Keep the tank lights off for about 48 hours until the fry hatch and avoid disturbing the tank until they become free-swimming after another couple of days.
About five days after spawning, add a few ounces of green water to the tank to feed the fry – you can also use vinegar eels or microorganisms from the sponge filter in the tank. During the first week, the fry will be very fragile, and they need to eat if they are going to survive. Avoid large foods and feed only small amounts at a time. Don’t change the water for at least 7 days and then only change 10% to 15% of the water volume to be safe.
After 2 to 3 weeks, the fry should be large enough to eat baby brine shrimp and commercial fry foods. To keep them growing, you’ll need to do a daily 30% water change and feed them several times a day.
The 5 Best Tetras for Breeding in Captivity
With preparation and proper care, you can easily breed tetras at home. Keep in mind, however, that certain species are easier to breed than others. If you want to maximize your chances of success, choose one of the five tetra species below and read up on their specific spawning requirements.
Here are the top 5 tetras for breeding in captivity:
1.       Black Phantom Tetra (Hyphessobrycon megalopterus) – Native to Paraguay and central Brazil, the black phantom tetra is a peaceful species that grows up to 1 3/4 inches. These fish are named for their dark color and black-edged fins. They are schooling fish that do best in groups of six or more and, because they are a very active species, they require a longer tank than some species. Males have longer fins and females have a red tint to the fins. During spawning, females can release up to 300 eggs at one time and males engage in elaborate courtship behavior.
2.       Glowlight Tetra (Hemigrammus erythrozonus) – Growing up to 1.5 inches, the glowlight tetra is a small species adapted to soft, acidic water. These fish are small and slender, having a translucent silver-peach body with an iridescent red stripe running along the length. This species does best in groups of six or more in a darkened tank with plenty of plants. To spawn this species, soft, acidic water is recommended. Spawning typically produces 100 to 150 eggs that are extremely sensitive to light, so keep the spawning tank dark. 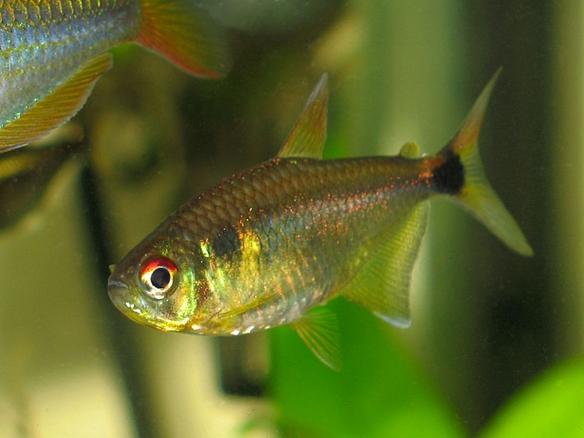 3.       Emperor Tetra (Nematobrycon palmeri) – This tetra has an iridescent body with subtle reflective rainbow hues and grows up to two inches long. The emperor tetra does best in groups of 5 or 6 with an alpha male, though they can also be kept in mating pairs. This species prefers subdued lighting with dark substrate and heavy planting as well as a quiet environment. For breeding, it is easy to tell males and females apart. Males have longer, more pointed dorsal and caudal fins as well as an extended ray in the middle of the caudal fin. During spawning, eggs are laid one at a time starting at dawn until about 50 to 100 eggs have been released.
4.       Pristella Tetra (Pristella maxillaris) – Easily one of the best tetras for breeding, the pristella tetra is also known as the x-ray fish because its body is transparent but it still has colored fins. This tetra is very hardy and easy to keep, though should be kept with schools of 6 or more. Males of the species are slenderer while females are rounded – also, because of the transparent body, you can see the eggs in females. Spawning produces as many as 300 to 400 eggs and the eggs hatch about 24 to 36 hours after spawning and become free-swimming 3 days later.
5.       Ember Tetra (Hyphessobrycon amandae) – The ember tetra grows to just about 1 inch in length and has an amber yellow coloration with orange highlights that is more intense in males of the species. These tetras do well in planted tanks with six or more of their own species. Breeding ember tetras is fairly easy, and the eggs are not light sensitive, but the fry grow very slowly and may take up to 2 months to reach 1/4 inch in length. Soft water is recommended for spawning.
When breeding tetras, it is important to condition your fish before you attempt to trigger spawning. Feeding high-quality commercial foods and live foods is the best way to do it. To learn more about live food pros and cons, check out our guide HERE.
comments powered by Disqus
PREVIOUS
ARTICLE
Tips for Breeding Gouramis in the Home Aquarium
Gouramis are some of the best community fish around because they are peaceful, hardy, and lovely to boot.
NEXT
ARTICLE
Saltwater versus Freshwater Aquariums
Learn the arguments for choosing to set-up either a freshwater or saltwater aquarium.