THE TOP 5 SHRIMP FOR THE FRESHWATER AQUARIUM

Written by Kate Barrington Updated August 05, 2016
Freshwater shrimp make an excellent addition to your cleanup crew - keep reading to learn more about the top 5 species!
When you are thinking about stocking a freshwater tank, your mind probably cycles through pictures of brightly colored fish – maybe even a Plecostomus to help keep algae levels under control. What many aquarium hobbyists fail to consider is the value of shrimp in the freshwater aquarium. Not only can freshwater shrimp be brightly colored and beautiful to behold, but they serve a very important role in the tank as well – they are scavengers, helping to clean up after your fish and improving the water quality in your tank. If you are thinking about adding freshwater shrimp to your tank, consider one of the top five species discussed below.

Freshwater shrimp come in a variety of sizes and colors with some being more adaptable to aquarium life than others. It is also important to note that some species of shrimp are best kept in tanks without fish because some fish prey on shrimp and other small invertebrates. If you can find a pairing that works well, however, you may be able to house shrimp and fish together in your tank. Just be sure to provide your shrimp with the food and water conditions they need to thrive and do your research ahead of time to determine what those conditions are.

When it comes to customizing your tank for freshwater shrimp, water quality is your primary concern. Shrimp can be very sensitive to changes in water parameters so you want to keep the conditions in the tank as stable as possible. Freshwater shrimp will feed on detritus to some degree, but any excess organic waste will break down and produce ammonia, nitrites, and nitrates – these will eventually kill your shrimp if you are not careful. Having a fully established system for biological filtration in your tank will be a great asset in maintaining high water quality.


In addition to keeping your aquarium water quality high, there are other specific water parameters you should be aware of for freshwater shrimp. Some species like red cherry shrimp prefer more alkaline water conditions while others prefer acidic water. For the most part, freshwater shrimp prefer warm water temperatures but you should do your research to determine the needs of whatever species you choose. In terms of feeding, shrimp will scavenge for food, digging into the substrate in your tank and eating whatever organic matter they can find. To keep your shrimp healthy and well-fed, however, you will need to supplement their diet with pellets or flake food, perhaps even some plant matter.


The Best Shrimp for Freshwater Tanks


Bumblebee Shrimp – These shrimp are named for their striped coloration which may be either black and white or red and white. Bumblebee shrimp generally grow up to 1 ½ inches in length and they prefer soft, warm water with a pH between 6.0 and 7.2. These shrimp are non-aggressive so you may be able to keep them with small fish, as long as those fish don’t view the shrimp as prey. This species is moderately difficult to care for because it requires high water quality.


Red Cherry Shrimp – One of the most popular species of freshwater shrimp, the red cherry shrimp is named for its bright red coloration. These shrimp grow to a maximum around 1 ½ inches in length and they are peaceful and moderately easy to keep. Red cherry shrimp are excellent scavengers, feeding on algae as well as organic debris, and they tend to thrive best in heavily planted tanks. These shrimp will breed in the aquarium as long as one male and one female are present.


Japonica Amano Shrimp – Also known simply as the amano shrimp, these shrimp grow to a length around 2 inches and they are a peaceful, easy to keep species. Amano shrimp are opaque brown in color with a light tan stripe that runs along the length of the back – they may also exhibit horizontal lines along the sides of the body. Amano shrimp prefer warmer temperatures with a pH between 6.0 and 7.5 in a lushly planted tank with plenty of hiding places. This species can live as long as two to three years when properly cared for, though they are fairly difficult to breed in the home aquarium. 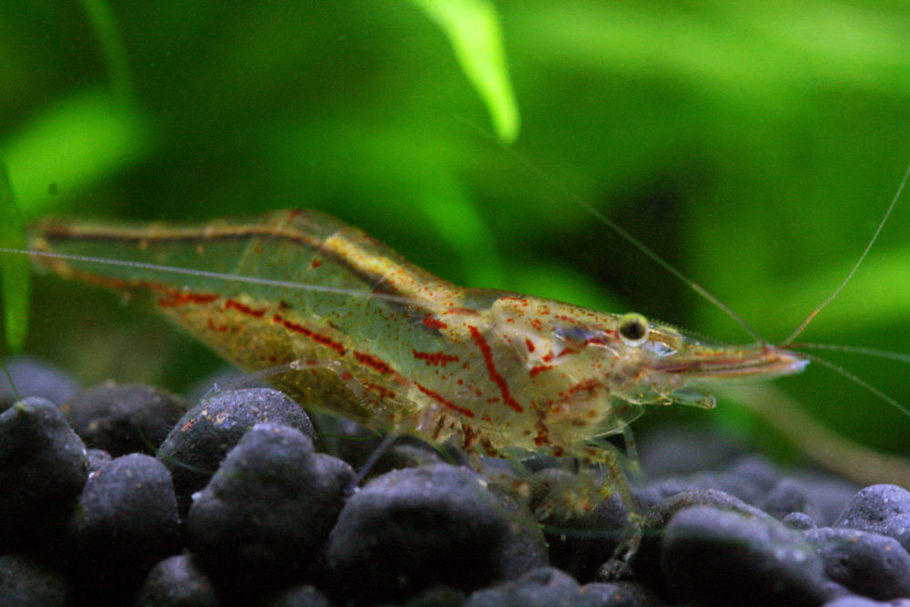 Ghost Shrimp – This species of shrimp is aptly named because they have transparent bodies that make them difficult to spot in the home aquarium. Ghost shrimp grow up to 2 inches in length and they are a peaceful species that is fairly easy to keep. These shrimp are excellent scavengers in the freshwater tank, feeding on any kind of leftover food they come across. Ghost shrimp can be housed with smaller peaceful fish species and they breed readily in the home aquarium when kept in large groups.


Grass Shrimp - These shrimp are relatively peaceful and easy to care for. They grow to a maximum length around two inches and they are excellent scavengers, feeding on a variety of leftovers in your freshwater aquarium. Grass shrimp have transparent bodies but they also have pigment granules that they can use for camouflage. These shrimp prefer slightly brackish tank conditions with warm water and a pH between 6.5 and 8.0 – they also need plenty of hiding places in the tank such as plants and driftwood. They can breed in the home aquarium, especially when kept in large groups.


Choosing Tank Mates for Your Shrimp

As it has already been mentioned, some freshwater shrimp are best kept in shrimp-only tanks – they may be preyed upon by larger fish species. There are, however, some fish that can be kept with shrimp without any trouble. If you want to keep fish with your shrimp, just be sure to choose fish species that are not carnivorous – even omnivorous fish have the potential to feed on shrimp as well. You also need to think carefully about the tank conditions that are best for your shrimp and then choose fish species to match. Shrimp can be very sensitive when it comes to water parameters so you want to make sure that your tank is catered to their needs and then choose your other tank inhabitants based on their ability to adapt to those parameters. Another good rule to follow with choosing tank mates for freshwater shrimp is that peaceful, community fish are generally best. Shrimp can become stressed by boisterous or fast-swimming fish, so stick to gentle species like tetras, rasboras, livebearers, and other similar fish.


Adding shrimp to your freshwater aquarium is not the right choice for everyone – you need to be sure that your tank is properly stabilized and that the water parameters are a good match for shrimp. Even then you still need to be careful. If you are thinking about adding shrimp to your freshwater tank, consider one of the top five species reviewed above.


comments powered by Disqus
PREVIOUS
ARTICLE
The Best Barbs for a Large Home Aquarium
There are many different species of barbs but some of them are better than others for the larger home aquarium.
NEXT
ARTICLE
Tips for Stocking Your Aquarium by Color
If you want a thriving, brightly colored aquarium then consider picking your freshwater fish by color.