Written by Kate Barrington Updated June 22, 2021
Looking for a unique species to add to your tank? Consider the archerfish, a fish with the ability to shoot bugs off of branches with a stream of water.
Aquarium fish come in all shapes, sizes, and colors. While many fish set themselves apart from the rest of the pack by their appearance, the archerfish is unique in a different way. These brackish water fish can actually shoot water from their mouths to knock insects off overhanging leaves or branches into the water. Keep reading to learn more about these fascinating fish!

Basic Information About Archerfish
Also known as spinner fish, archerfish are a small family of seven species belonging to the genus Toxotes. There are several things which set this group of fish apart from other aquarium fish. First, they are a brackish species – they typically inhabit estuaries and mangrove swamps. They can, however, be found in the open ocean or far upstream in fresh water. These fish are native to various parts of India as well as Indonesia, Sri Lanka, Australia, Polynesia, and the Philippines. 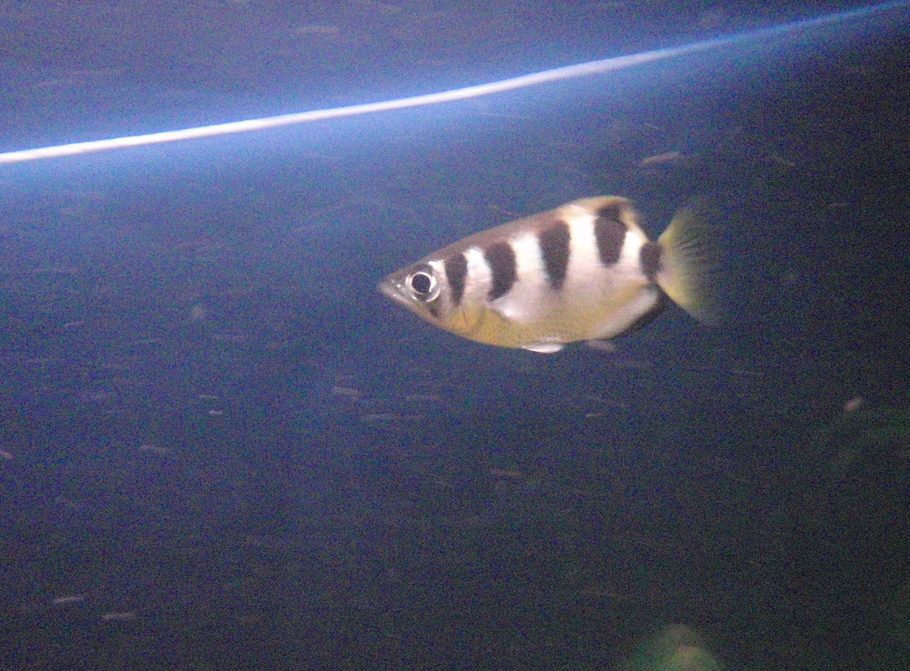 The second thing that sets archerfish apart is their ability to shoot water droplets from their mouths to knock insects of low-hanging leaves and branches above the water. According to an article published in National Geographic, archerfish exhibit this behvaior with stunning accuracy and the strength of the jet is so powerful that, if it were to hit you, you’d feel like you’d been stung by an insect. In order to shoot water with the force and accuracy needed, archerfish actually change the shape of their mouths, adjusting it to hone in on their target as they spray, effectively using the water as a tool.
In addition to being able to shoot water with amazing accuracy, archerfish have a unique appearance. These fish have laterally compressed bodies and their profile forms a straight line that runs from the mouth to the dorsal fin. These fish have protractile mouths which simply means that their lower jaw juts out – it is the unique shape of their mouth which allows them to exhibit their water-shooting behavior. These fish range in size from 2 to 4 inches but one species grows up to 16 inches long.

Species of Archerfish
The name archerfish applies to seven different species in the Toxotes genus. Here is a quick overview of the seven different species of archerfish:
Zebra Archerfish (Toxotes blythii) – Also known as the clouded archerfish, this species is fairly rare in the aquarium trade. This species has a gold-colored body with dark blotches and they grow to about 4 inches in length. Because this species is are in the aquarium hobby, they tend to be fairly expensive. They are generally a peaceful fish, however, and may do well in a large community tank.
Largescale Archerfish (Toxotes chatareus) – Known as the seven-spot archerfish as well as the largescale archerfish, this species grows upto 8 inches long. These fish have a sooty color which sets them apart from other archerfish species and they have dark-colored blotches on their body. This species also has an extra dorsal spine compared to other species.
Banded Archerfish (Toxotes jaculatrix) – This species of archerfish typically grows to about 6 inches long and it is easy to identify by the black vertical bands set over a silver background. These fish make good community fish as long as they are kept with other species too large for them to eat. When properly cared for, these fish can live up to 10 years in captivity.
Western Archerfish (Toxotes kimberleyensis) – Also known as the Kimberley archerfish (named for the region of Australia from which it hails), the western archerfish grows up to 6 inches in length and it exhibits a silvery white color with black markings along the sides. This species is unique from other archerfish in that it prefers deep freshwater pools to brackish environments. 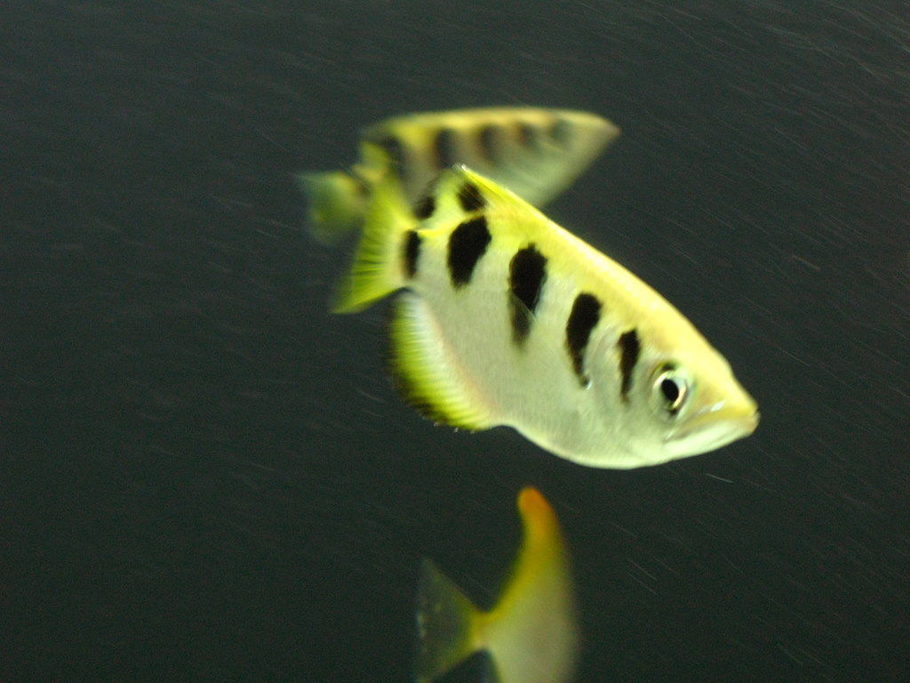 Caring for Archerfish in the Home Aquarium
Archerfish are a very interesting group of fish, but they can be challenging to keep in the home aquarium for a number of reasons. For one thing, they tend to thrive more in brackish environments than fresh water. It can sometimes be difficult to strike the right balance in salinity for brackish species of fish, but it can definitely be done. More important is the fact that these fish prefer live prey.
To set up an archerfish tank, you need to start with a fairly large aquarium – at least 55 gallons, but ideally something closer to 90 gallons. Archerfish are schooling fish, so you need to have a tank large enough to accommodate a group of them, keeping in mind that they enjoy having a lot of open swimming space. This being the case, you should keep the middle section of the tank largely free of decorations, concentrating them around the edges of the tank.
Line the bottom of your archerfish tank with about 2 inches of sand substrate and decorate with pieces of driftwood and smooth river rocks. You can also use live plants like Java fern and Anubias to decorate, but make sure to choose plants that can tolerate brackish water. When it comes to arranging your tank decorations, choose two large pieces of driftwood and position them on either end of the tank, set at an angle so they protrude about 6 inches above the surface of the water. You can also choose to drape a plant over the end of each piece so the leaves hang down into the water.
When it comes to feeding your archerfish, you’ll need to offer them a varied diet of live prey. Some of the insects archerfish are likely to eat include mealworms and crickets, though you can also culture fruit flies or houseflies. Archerfish may eat live brineshrimp and other live foods as well as some flakes or pellets. You can offer your archerfish food from the surface or, if you want to see them in action, set some crickets loose on the protruding driftwood.
If you’re looking for a unique species of fish to stock a new tank and you’re up for a bit of a challenge, archerfish are a wonderful option to consider. These fish are attractive and very unique in their behavior, making them a joy to keep. Just be sure to learn everything you can about these fish so you can customize the tank to suit their individual needs.

comments powered by Disqus
PREVIOUS
ARTICLE
What Every Aquarium Hobbyist Should Know About Livebearers
If you're looking for some low-maintenance fish to add to your freshwater tank, consider some livebearers.
NEXT
ARTICLE
Show Tank-Worthy Tankmates for Fancy Guppies
Everyone knows that guppies are some of the most colorful freshwater fish while also being some of the easiest to care for.