Written by Kate Barrington Updated June 16, 2021
The Arowana is a very large but graceful fish that makes a very interesting freshwater tank inhabitant.
There are countless different species of freshwater fish on the planet and not all of them are right for captivity. Still, if you have enough tank space and take the time to learn about their needs, the Arowana is a very unique type of fish that can be kept in the freshwater tank at home. The name Arowana refers to a group of fishes and there are several different types to choose from. In this article you will learn the basics about these beautiful fish and receive some tips for keeping them in your own tank.
What is an Arowana?
The Arowana is a type of bony freshwater fish that belongs to the family Osteoglossidae – these fish also carry the name “bonytongues”. These fish are known for their elongated bodies which are covered in a mosaic of thick, heavy scales. Arowanas have bony heads with soft rays on the anal and dorsal fins but their ventral and pectoral fins are very small compared to the size of the fish. The nickname of these fish, bonytongues, was given in reference to the fact that they possess a toothed bone on the floor of their mouth. This bony “tongue” allows the fish to bite against the teeth located on the roof of its mouth. Another unique adaptation this type of fish exhibits is the ability to breathe air using the swim bladder organ. 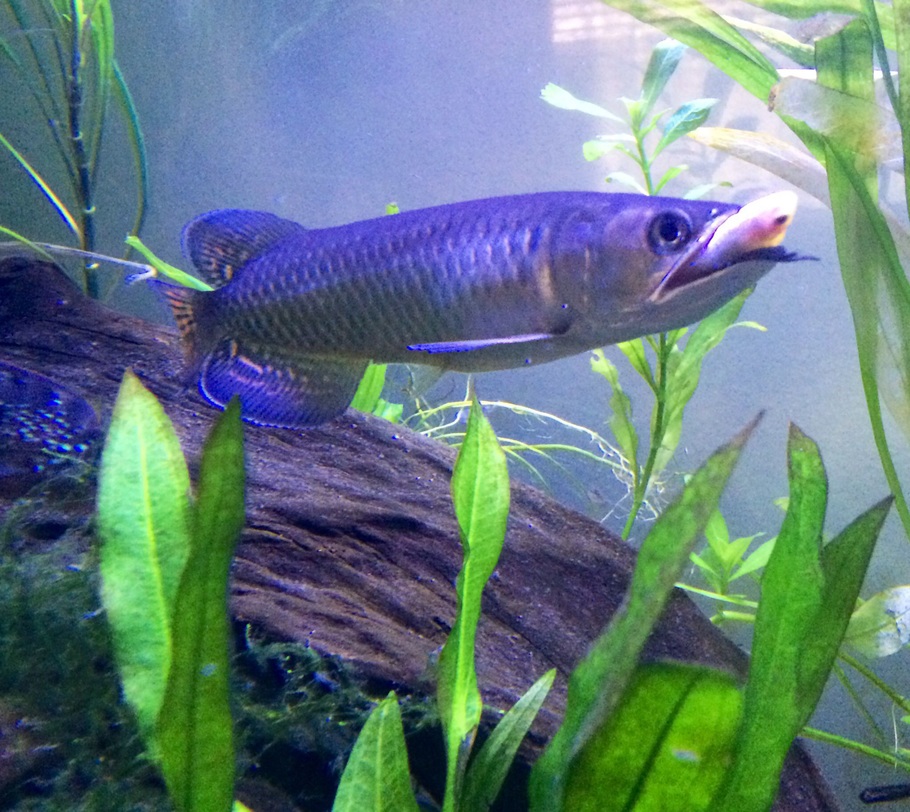 Fish belonging to the family Osteoglossidae are carnivores – they eat everything from fish and insects to birds perched on branches overhanging the water. Different species of Arowana can be found all over the world in parts of South America, Africa, Asia, and Australia. Technically, the one African species of Arowana belongs to a different family – Arapaimidae – which also includes numerous species of arapaimas or pirarucus. Despite being carnivorous, Arowanas do not typically eat their own young. In fact, several species exhibit advanced parental care, building elaborate nests to protect their young after hatching. All Arowanas are mouth-brooders which means that the parents hold the eggs in their mouths after spawning until the eggs hatch.

1. Asian Arowana (Scleropages formosus) – The name Asian Arowana is given to several different varieties of Arowana that can be found throughout Southeast Asia where they tend to inhabit blackwater rivers and other slow-moving waters. The different varieties of Asian Arowana are distinguished mainly by color and examples include the Green Asian, Silver Asian, Red Asian, Red-Tailed Golden and the Blue Malayan. Most Asian Arowanas grow up to 35 inches in length, so they need very large aquariums. These fish prefer soft and slightly acidic water in the 75°F to 86°F.

2. African Arowana (Heterotis niloticus) – Although this species is still known as an Arowana, it is actually more closely related to arapaimas. The main difference between this and other Arowanas is that the African Arowana feeds primarily on plankton. This species still grows fairly large, reaching lengths up to 1 meter and weighing up to 22 lbs. (10 kg). African Arowanas are usually gray or brown in color, often with a bronze sheen, though juveniles exhibit dark horizontal bands. 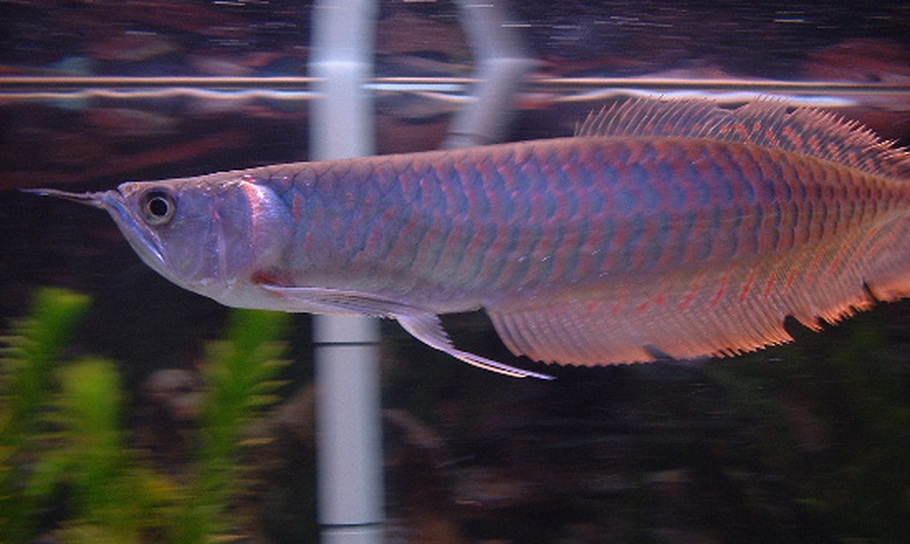 3. Silver Arowana (Osteoglossum bicirrhosum) – The Silver Arowana is a South American species that can be found in the Amazon, Rupununi, and Oyapock Rivers. This species grows up to 35 inches long and it exhibits a uniform silver coloration throughout its lifespan – they are sometimes called Dragon Fish because of their armor-like scales. These fish tend to inhabit the upper regions of the river, often jumping out of the water to capture prey. Silver Arowanas eat insects, crustaceans, fish, and other animals like birds, bats, and snakes.

4. Black Arowana (Osteoglossum ferreirai) – The Black Arowana is another South American species that can be found in the upper Essequibo River basin in Guyana as well as the Negro River basin in Colombia and Brazil. This species grows up to 35 inches long and it has a dark, iridescent blue or steel-gray coloration as an adult but a black-and-yellow coloration as a juvenile. These fish require a minimum of 480 gallons to accommodate their size and they prefer a tank maintained with black water additives. Black Arowanas will eat a variety of insects, crustaceans, amphibians, and small fish.

5. Jardini Arowana (Scleropages jardini) – This species of Arowana is native to New Guinea and Australia. It is a smaller species of Arowana, growing only to about 24 inches in length. These fish tend to stay in the upper regions of the water and they will jump to catch prey, so a tight-fitting lid is needed. Jardini Arowanas are carnivorous and, though they prefer live food, some can learn to accept pellet foods in captivity. This species can be kept with other semi-aggressive fish as long as they are too big for the Arowana to swallow.

Tips for Keeping Arowanas in the Home Tank


Though the specifics vary from one species to another, most Arowanas are solitary fish, though some of them allow the company of other fishes while they are still young. Adult Arowanas tend to be highly aggressive and dominant, though they can sometimes be kept with other semi-aggressive or aggressive species as long as they are too large to fit in the Arowana’s mouth. Some examples of tank mates you might want to choose for the Arowana include Oscars, tinfoil barbs, green terror cichlids, clown knifefish, and pacus. 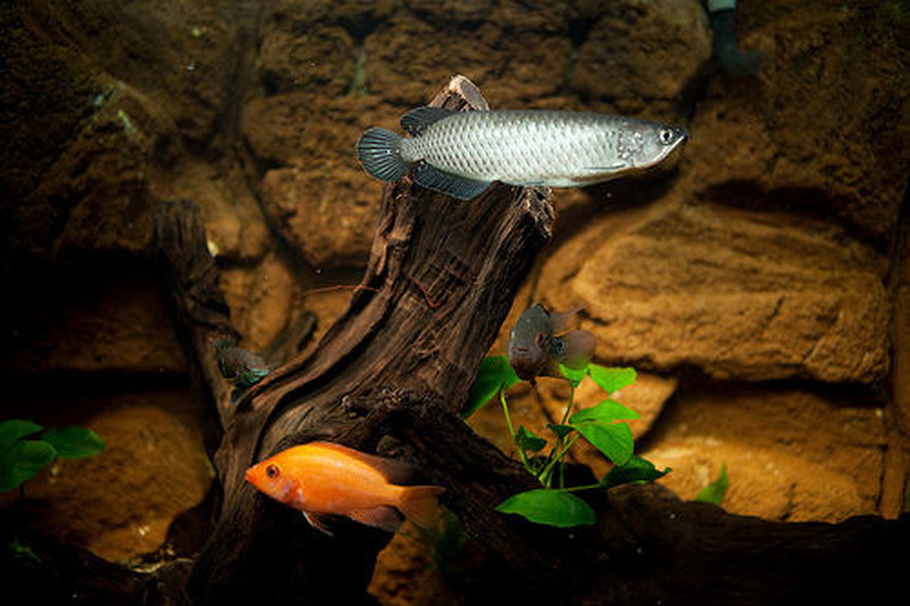 In addition to making sure that your Arowana tank is large enough, you also need to make sure it is outfitted with a tight-fitting lid. In the wild, Arowanas have been known to leap more than six feet in the air to pick insects and birds off low-hanging branches by the riverside. These fish do best on a diet of live and frozen foods and they require a tank size of at least 150 gallons. In terms of tank decorations, most Arowanas prefer fine gravel substrate with live aquarium plants for decoration. Because the Arowana is so large you need to leave plenty of open space for swimming – it is best to concentrate your plants and other decorations around the edges of the tank.

Arowanas are a unique but beautiful type of fish that can make for very interesting freshwater tank inhabitants. Because their needs are so specific, and because they grow so large, you need to be careful about cultivating the right tank conditions if you plan to keep Arowanas. Using the information in this article you can successfully plan and maintain your Arowana tank.

comments powered by Disqus
PREVIOUS
ARTICLE
Can You Keep Other Fish With Your Betta?
The betta fish is an incredibly popular species that has a reputation for being aggressive.
NEXT
ARTICLE
Corydoras Catfish: Community-Friendly Bottom Feeders
If you are looking for the perfect fish to add to your community tank, consider corydoras catfish.