Written by Kate Barrington Updated September 24, 2021
Pro and con arguments for using acrylic tanks, common sizes, etc.
If you're going to keep fish in your house, you're going to need to put them someplace! Historically, glass has been used to build aquariums but for the last 50 years, acrylic has become a very popular material for fish tank. This article covers the history of aquariums, pro arguments for using acrylic tanks, con arguments for using acrylic tanks, common sizes, and some useful online sources for you.
History of Fish Tank Materials
While keeping fish for both food and pleasure has been an interest documented starting more than 4,000 years ago, keeping fish in aquariums is a much more recent development. Supposedly Madame Dubarry, a mistress to King Louis XV in France, invented the fish bowl sometime in the mid-1700s. In 1805, Robert Warrington was credited with developing the first sustainable glass aquarium. 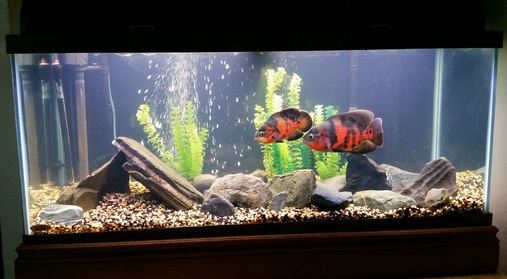 During the Victorian period in England and in Europe, fish keeping as a hobby developed quite a following. At that time, hobbyists would use slate or steel bottomed tanks which were heated from underneath with flames! Their tanks were ornate affairs, glass enclosed in steel contraptions that were hardly waterproof. These glass tanks often were "caulked" with a putty to try to help "waterproof" the tank. While continuously improved upon, aquariums didn't really reach a true period of innovation until the mid-1960s when glass framed tanks were replaced with glass sealed tanks. Instead of using metal to frame the tanks, glass aquariums were sealed together using a silicone-based adhesive...
READ MORE

In nature, when animals expel their wastes and plants decay, anaerobic bacteria in the environment break down waste into harmless nitrogen that is released into the air through the ground and water. If nature did not have some mechanism for using the "waste" material, eventually, we would run out of good stuff. Luckily, through the participation of bacteria using these waste substances, harmful materials (to animals) like ammonia are converted into something harmless and useable again. Two kinds of bacteria participate in this cycle: Nitrite Bacteria (Nitrosomonas) and Nitrate Bacteria (Nitrobacteria). This process of breaking down animal wastes is called Nitrification – the ammonia produced by animal waste is converted into nitrite by nitrosomonas which is then converted to nitrate by nitrobacteria.


What Happens When You Keep Fish In Tanks?

Out of fish waste, the chemical we worry about most in a tank is ammonia since it is most toxic of the metabolic...
READ MORE

HOW TO HUMANELY EUTHANIZE YOUR FISH

Written by Kate Barrington Updated March 10, 2022
If your fish is suffering, you may want to consider euthanasia as an option to humanely end his pain.
There is nothing quite to heartbreaking as losing a beloved pet, especially if you have tried your best to treat him. You have tried everything to nurse your fish back to health but to no avail -- it is dying and in distress. Many people do not even realize that euthanasia is an option for fish, but if your fish is in pain and slowly dying, it is an option you might want to consider. Some people still decide to never euthanize their fish -- they would rather just let nature take its course with the fish and let the fish die on its own. You can go this route or you can choose to speed things along for the sake of your pet. Most people determine their actions by considering the fish's quality of life in its last days.
Euthanasia Options for Fish
There are several different options for the euthanasia of fish, many of which will be described here, in order of popularity. These methods are divided with a focus on "old school" methods and on newer, more humane methods. When researching this article, we looked at public opinion on the Internet, the American Veterinary Medical Association (AVMA)'s opinion on euthanasia and how many universities across America euthanize fish for research purposes.
Many colleges use AVMA as their standard in determining the humane way to euthanize animals. The AVMA puts out a report about every decade where they survey acceptable means to euthanize animals. The most recent report was released in 2013.
Most college...
READ MORE

How To Humanely Euthanize Your Fish
If your fish is suffering, you may want to consider euthanasia as an option to humanely end his pain.
Changing The Water
Tips to make changing the water easier.
Aquarium Screensavers
Different kinds of screensavers, top aquarium screensavers available today.
Stacking Rocks in Your Aquarium
Learn how well stacked rocks can add personality and a natural look to your aquarium.
What Is A Refugium
Why people use refugiums with their aquariums?
Acrylic Aquariums
Pro and con arguments for using acrylic tanks, common sizes, etc.
All Glass Aquariums
History of Fish Tank Materials.
Aquarium Stands
Discuss the role that aquarium stands have on the fish keeping hobby.
Custom Aquariums
This article delves into the pros and cons of custom built aquariums - and more.
Understanding The Nitrogen Cycle
Understanding the nitrogen cycle and its importance to a healthy tank.
Read more articles (10)

Identifying and Treating the Most Common Cichlid Diseases
How To Humanely Euthanize Your Fish
What Are the Best Cichlids for a Community Tank?