Written by Kate Barrington Updated June 12, 2015
Tips on cycling your fishtank.
Before you add live fish to your tank, you will need to cycle it for a period of time to create a good environment for your fish life. The term “cycling” refers to the nitrogen cycle which is the process through which beneficial bacteria in your tank work to break down wastes, converting toxic substances like ammonia and nitrite into less harmful nitrates.


In order to cycle your tank you should begin by turning on all the equipment and let it run constantly for a few days. If mixing the sea salt in a freshwater tank, follow the procedure on the package for mixing but make sure that the filter is turned on while mixing. When completed, fill the filter with the saltwater. Turn on the rest of the equipment and run the tank constantly for a few days.
Cycling with Live Rock
Cycling a saltwater tank that contains live rock is a little different from cycling one without live rock. When you cycle a tank that contains live rock, some of the organisms living in the live rock will die off in a process that produces a large amount of waste materials which can be harmful for fish. During this cycling period the ammonia level in the tank rapidly climbs as bacteria begin to process the dead organisms. This high level of ammonia, which is toxic to fish and plant life, can have a synergistic effect and cause more organisms to die. This, in turn, produces more ammonia. The populations of bacteria involved in converting ammonia to nitrite quickly build up to sufficient numbers and process the waste generated while the ammonia levels go down to undetectable levels. 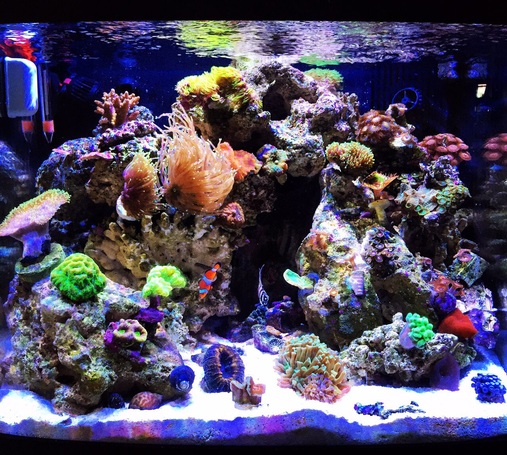 You can buy live rock cycled, partially cycled or almost straight from the reef. If the live rock is going to be used in an existing reef aquarium, then cycled live rock should be used. This will minimize the peak in ammonia and nitrite caused by the addition of the rock to the tank. If you purchase live rock that has not already been cycled, or “cured”, then it is up to you to cure it before adding it to the tank. This is not a difficult process, but it will take a little time – you will learn how to cycle live rock in the next section.
How Do You Cycle Live Rock?
Start by putting the live rock into the tank or have another tank specifically for cycling purposes. Make sure that you have a skimmer in the system as well. The use of the skimmer and activated carbon removes compounds before they can break down from the bacteria. Add circulation to the water to allow good nutrient and waste exchange, but no lighting at this point. Leave this setup in place for about 2-4 weeks while monitoring the ammonia and nitrite levels. The length of the cycle takes around 2-4 weeks, from the time the rock is placed in the vessel to when the nitrite levels drop to undetectable levels. 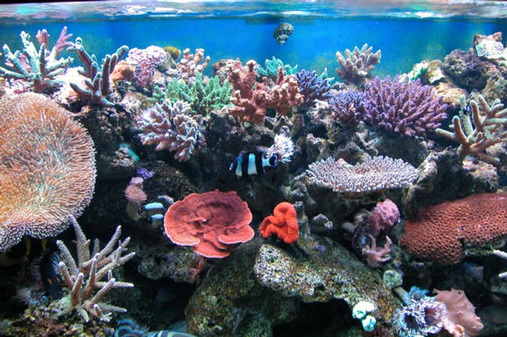 It is also important to operate the lights during the cycling period. Operate them by increasing the length of time used during the cycling period. Start at around 6 hours per day, then increase by an hour every couple of days until a full day’s length is reached. In addition to the lighting used, activated carbon should be used in the tank filter and regular water changes should be implemented.


Here is a simple process to follow for cycling with live rock in a tank that doesn’t already contain fish, corals, invertebrates, or other creatures.

If your saltwater or reef tank is already set up and you just want to add some live rock to it, the process for curing the live rock is a little different. Follow the steps below to cure live rock before adding it to an existing tank:


Cycling a saltwater or reef tank is very different from cycling a freshwater tank, especially if you plan to use live rock in your tank. Before adding fish to your tank you should cycle the tank properly using the live rock. If, however, you already have a tank setup, you need to cure new live rock outside the tank before adding it.


comments powered by Disqus
PREVIOUS
ARTICLE
Maintaining Your Saltwater Tank
Tips for maintaining a saltwater fish tank.
NEXT
ARTICLE
How to Solve Common Saltwater Tank Problems
Cultivating a thriving saltwater tank can be a challenge but it is also incredibly rewarding.