HOW TO REMOVE A MANTIS SHRIMP FROM A SALTWATER AQUARIUM

Written by Kate Barrington Updated September 16, 2014
In this article you will receive an overview of what mantis shrimp are, how they can impact your saltwater aquarium, and how to remove them properly.
Mantis shrimp are one of the most dreaded marine pests you are likely to encounter in your saltwater aquarium. Not only do these crustaceans feed on saltwater aquarium inhabitants, but they can also break glass and damage live rock. This article will provide you with basic information about what these animals are, why they are dangerous, and methods on how to remove them from your tank.
Overview of Mantis Shrimp


Though their name suggests otherwise, mantis shrimp are actually a type of crustacean. These animals belong to the order Stomatopoda and they can be found in a variety of tropical and sub-tropical marine habitats around the world. Mants shrimp are fierce predators of the marine world due to their ability to spear and smash their prey with powerful claws. Mantis shrimp may vary in color from dull browns to bright neon colored bodies – some specimens exhibit a number of different colors. Their full-grown adult size ranges from about 30 cm to 38 cm, though the largest caught specimen was 46 cm (18 in) long. These crustaceans either live in rock crevices, coral, or make burrows in the substrate (where they plug the entrance with a rock or shell).


Outside the aquarium hobby, mantis shrimp have a number of other uses. For example, in Japan they are boiled and consumed as a topping for sushi – they may also be eaten raw as sashimi. Throughout Vietnam, mantis shrimp are steamed, grilled, or boiled and served with fish sauce or tamarind paste. In Cantonese, the mantis shrimp is known as the “pissing shrimp” because it has a tendency to shoot out jets of water when it is picked up. When cooked, the flesh of the mantis shrimp is more similar to lobster rather than shrimp and their shells are very tough and hard to crack open to get at the meat. 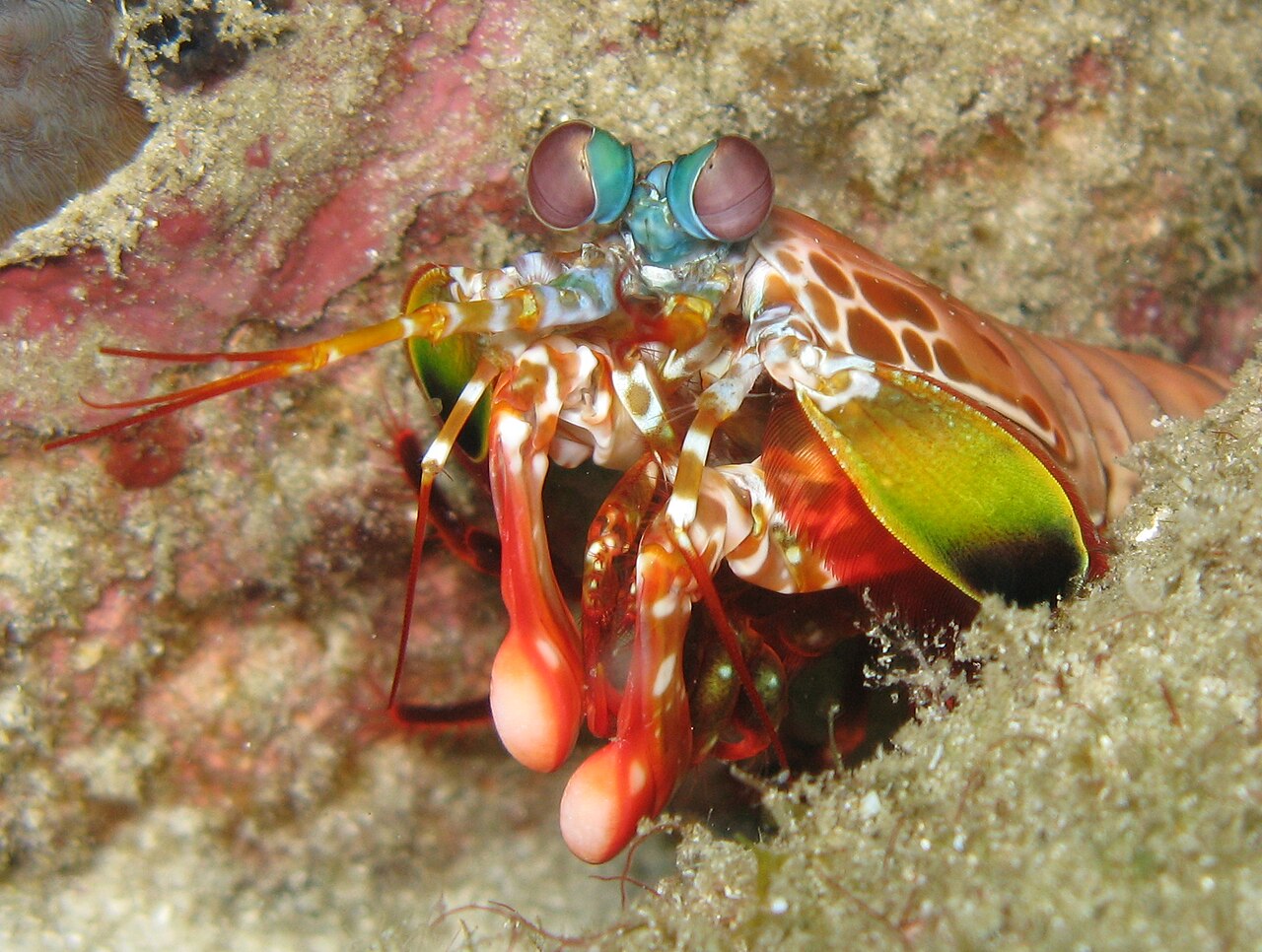 
Mantis shrimp can be useful additions to certain saltwater tanks but, for the most part, they are considered a nuisance by aquarium hobbyists. These hardy crustaceans can be transported to the aquarium accidentally through live rock and, once established, they can be difficult to eradicate.


Mantis shrimp require removal from your tank because:


How Do You Know You Have a Mantis Shrimp in Your Tank?
Mantis shrimp are very hardy animals that usually enter a tank through “hitchhiking” onto live rock. The first inkling that you have one in your tank is a tapping or clicking noise coming from your aquarium. Another clue may be disappearing fish or dead crustaceans with cracked shells. You may not actually see the mantis shrimp in your tank because they tend to burrow, so keep an eye out for these signs.


There are many different types of removal techniques. Here is a list of the most popular and successful methods for removing mantis shrimp from the saltwater aquarium:


If you know the location of the mantis shrimp, you can use the technique of forcing a foreign liquid into the rock where it is living. First, isolate the rock in another container or sink. Next, choose your weapon - freshwater, soda water, and boiling water are all good choices. Squirt your liquid of choice into a hole in the rock using a syringe or baster. The mantis shrimp will evacuate the rock when he is stressed.


If you are not too attached to the size or shape of the rock the mantis shrimp is living in, you can bust the rock into smaller pieces with a hammer. It will be easier to flush out the mantis shrimp when it does not have as many holes or tunnels to hide in.


A trap is the best bet when you know you have a mantis shrimp living in your tank, but its exact location is unknown. You can make a trap of your own quite easily, or you can purchase a commercial trap. Both work in the same manner, by baiting the trap with food, then capturing the mantis shrimp after it enters the trap.


To make your own trap, you need sharp scissors or a knife, a 16 oz. clear plastic bottle, and a piece of seafood for bait. Follow these steps to make a trap:


Mantis shrimp have a well-deserved reputation for being fierce predators. To ensure your tank does not get wiped out by one of these creatures, early detection and removal is essential. By following the above advice, you can keep your fish and invertebrates safe from these predatory animals. Some fishkeepers hold a differing view of mantis shrimp, and actually keep these creatures purposely. To do this, several factors must be taken into account such as keeping the animal isolated and in an acrylic tank. Please research this further if you plan to keep the mantis shrimp after you remove it from the current tank.


comments powered by Disqus
PREVIOUS
ARTICLE
Getting Rid of Aiptasia in Your Reef Aquarium
Learn about aiptasia in the reef aquarium and how to get rid of it.
NEXT
ARTICLE
What NOT to do with a Saltwater Tank
Learn what "not" to do when starting out with your saltwater fish or reef tank.