HOW TO DEAL WITH MARINE FUNGUS IN THE SALTWATER AQUARIUM

Written by Kate Barrington Updated May 24, 2022
Fungal spores are present in all aquariums but, if you are not careful, they can become a problem in the saltwater tank.
When cultivating a saltwater aquarium there are a variety of elements you must monitor and control. In addition to keeping your water quality high and your salinity levels stable, you also have to be on the lookout for harmful bacteria and fungus entering the tank. While most aquariums naturally contain some fungus and bacteria, if these organisms are allowed to grow out of control they could contribute to a number of problems in your tank.
Filamentous fungus, for example, can be a serious problem in the marine tank. Other forms of fungus may include fungal infections which affect the bodies of fish, and egg fungus which can quickly kill fish eggs before they have time to hatch. To prevent fungus from causing problems in your saltwater aquarium, take the time to learn the basics about how these infections start and what you can do to prevent them. 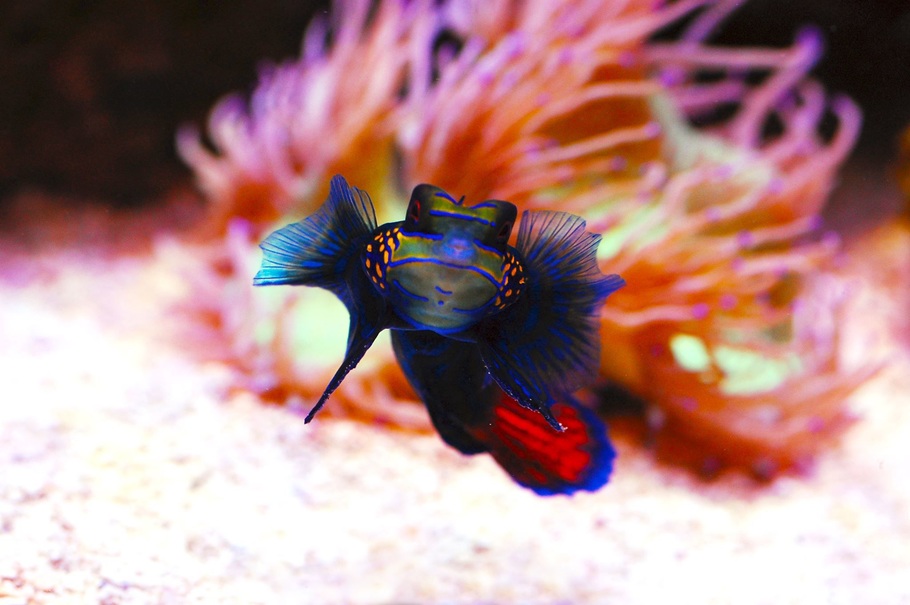 What is Marine Fungus?
Live marine fungus typically consists of a mass of threadlike filaments called hyphae that grow together in clumps to form mats. Certain types of fungus grow downward into the organic matter on which they are feeding, acting much like the roots of live plants. Other types of fungus grow outward, spreading in the form of fluffy growths. As the fungus grows and spreads, sporangia will form on the tips of the filaments – these sporangia contain spores which will be released into the tank water when the sporangia mature and rupture. Fungus feeds on all kinds of organic matter – fish waste is one the most common foods that they ingest, along with uneaten fish food. Certain types of fungus also exhibit parasitic qualities, feeding on the bodies of fish that have already been damaged by stress, injury or disease.
Marine Fungal Infections
There are several different types of marine fungus, some of which are normally harmless to aquarium fish. Saprolegnia fungi, for example, are common in all types of aquariums and they typically feed on organic waste like dead fish and uneaten fish food. In cases of poor water quality, however, this fungus may start to grow on aquarium fish, especially if its gills or skin have already been damaged. Overcrowding and stress in the saltwater aquarium may also increase the likelihood that normally harmless fungus will begin to attack your fish. 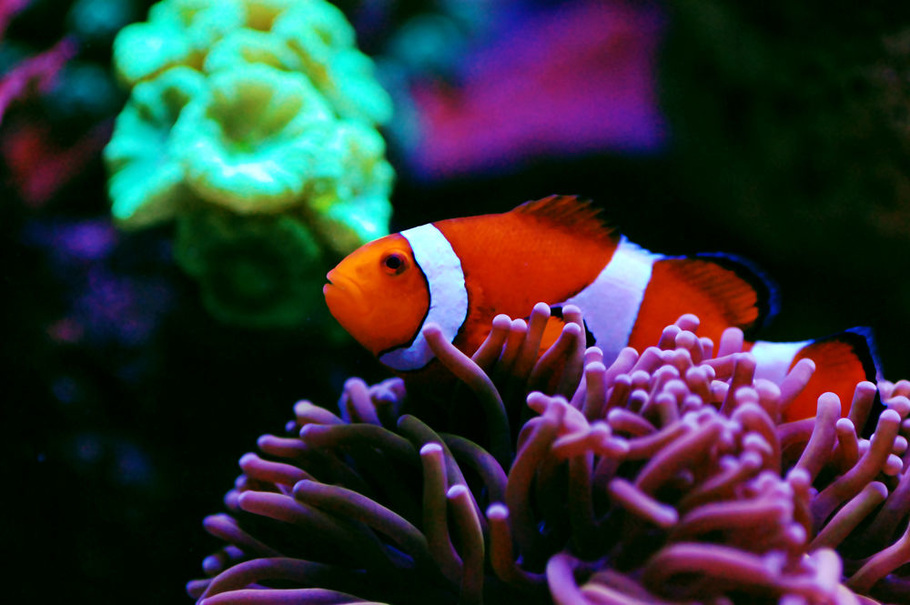 The most common type of fungal infection in saltwater and freshwater aquarium sis body fungus – this type of infection is very distinctive and generally easy to diagnose. These fungal infections typically manifest in the form of fuzzy patches growing on the body or fins of infected fish. As the infection spreads, the growths may become enlarged and could begin to take on a green or brownish tint as a result of debris particles becoming trapped on the filaments. Once this type of fungal infection sets in, it can quickly spread throughout the body of infected fish. Though the infection usually does not penetrate any deeper than the superficial muscle and gill layers of the body, it can cause severe damage. Some fungus may also excrete harmful chemicals that can weaken the immune systems of infected fish, leaving them more susceptible to secondary infections.
Treatment Options
The key to dealing with marine fungus in the saltwater aquarium is to take action as soon as you recognize the problem. While you may be tempted to tackle the infection itself first, your first step should be to remedy the underlying cause of the infection. In many cases, fungal infections are precipitated by a drop in water quality or an increase in stress. Test the water in your aquarium to make sure the water parameters are in line and make adjustments if necessary. If you are able to determine that water quality is not the issue, look for other sources of stress in the tank. If one or more of your fish are particularly aggressive, it could cause the rest of your fish to become stressed. Physical injury as a result of aggressive tank mates or unsafe aquarium decorations may also be a problem.
After you have determined and remedied the underlying cause of the fungal infection you can move on to treating the infection itself. You will not be able to completely remove the fungal spores from your aquarium because they are resistant to treatment. Fortunately, it is unnecessary to remove all of the spores from the tank because they will not harm your fish unless they are already weakened by stress or injury. To deal with fungal infections you should quarantine the affected fish in a hospital tank and treat the water with an anti-fungal medication.
Anti-Fungal Medications
There are many anti-fungal medications available including malachite green and formalin – salt may also be an effective treatment for some fungal infections. When treating your fish, make sure to remove any activated carbon from your aquarium filter and follow the dosing instructions carefully. If the infection is particularly stubborn, you may need to use potassium permanganate – this product can be toxic in water with a high pH, so use this product very carefully. Below you will find a list of popular anti-fungal medications as well as tips for using them in your tank:
PrimaFix – This medication is specifically designed to treat cotton-like fungal growths, both internally and externally. PrimaFix is made using active ingredients derived from the West Indian Bay Tree (Pimenta racemosa) and it is considered to be all-natural and very safe for fish. This medication will not discolor your tank water or have a negative effect on beneficial bacteria – it can also help to prevent bacteria from becoming resistant to medication. In cases of extreme fungal infections, this medication can be used with MelaFix to help your fish heal quickly.
MelaFix – This medication is made from extracts taken from the Tea Tree (Melaleuca) and it is particularly effective against strains of fungus that have become resistant to typical medications. MelaFix treats things like tail rot, fin rot, ulcers, mouth fungus, and other infections in as little as 4 days. This medication won’t affect corals or invertebrates – it can even be used to treat parasitic flatworms. 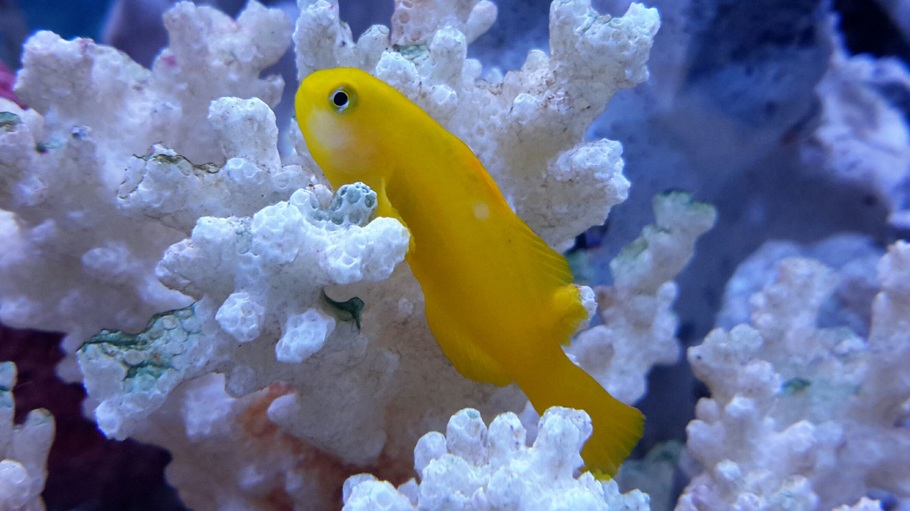 KanaPlex – This medication is made with kanamycin and it is safe for treating a variety of bacterial and fungal diseases in marine fish, even internal infections. KanaPlex is absorbed by fish through their skin so it is even effective in cases where your fish refuse to eat. This medication won’t affect your beneficial bacteria and it can be filtered out when you are done using a carbon filter.

Seachem Focus – This medication is specifically designed to treat internal infections in marine fish. Focus can be used alone or mixed with other medications to make your fish more likely to take them in food. This medication can be used for freshwater or marine fish.
Methylene Blue – This medication is designed to attack superficial fungal infections and it is a good alternative when your fish are sensitive to other medications like Malachite Green. Methylene Blue can also be used on fish eggs to kill egg fungus and to prevent certain fungal infections.
The best way to deal with fungus in the saltwater aquarium is to maintain high water quality so it does not become a problem. Remember, fungal spores are present in all aquariums and they are generally not harmful to fish under normal conditions. If the water quality in your tank drops, however, or your fish become stressed you may have problems with fungal infections.
comments powered by Disqus
PREVIOUS
ARTICLE
Salinity Requirements in a Saltwater Aquarium
The key to maintaining a healthy saltwater aquarium is to strike the right balance in the salinity of your tank water.
NEXT
ARTICLE
Why Do Fish Disappear from the Saltwater Tank?
There is nothing as heart-breaking as losing a fish but it can be even more devastating when the fish simply disappears.