WHY ARE TANGS SOME OF THE BEST FISH FOR REEF TANKS?

Written by Kate Barrington Updated August 22, 2017
Tangs are not just some of the most brightly colored species of tropical saltwater fish - they are also great additions to the reef tank.
If you are looking for the perfect fish to add to your reef tank, you may want to consider tangs as an option. Also known as surgeonfish or doctorfish, tangs make a great addition to the reef tank for a number of reasons. Keep reading to learn more about tangs and for recommendations on the best reef-safe species of tang.


The Basics About Tangs

You are probably familiar with some of the most popular tang species such as the yellow tang and the blue tang, but there are many more species out there to love. Tangs are generally peaceful fish that do well in community tanks, though they can sometimes be aggressive with other tang species. In the wild, tangs swim in large schools but this requires a lot of space so it is best to keep a single tang or a breeding pair in your home aquarium. There are a wide variety of different tang species available in the aquarium trade, but most of them grow to a minimum of 7 inches and a maximum between 10 and 15 inches. In addition to their size, tangs are also very active swimmers so they need a fairly long tank with at least 48 inches of lateral swimming space. 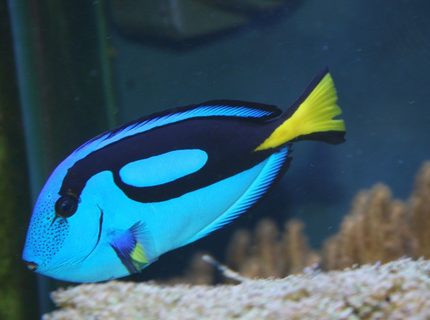 Why Do Tangs Do Well in Reef Tanks?

There are a number of reasons why tangs do well in reef tanks. For one thing, their natural habitat is very similar to a reef tank – shallow waters in tropical seas where there is plenty of algae growing on rock and dead coral. Tang are herbivores with algae being their main food source in the wild. In the home aquarium, you should supplement your tang’s diet with commercial herbivore pellets as well as dried or frozen marine algae and some fresh vegetable matter. Some tangs will accept meat-based foods as well, so do your research about whatever species you choose. For the most part, tangs do not feed on invertebrates which means that any coral you keep in your reef tank will be safe except from the largest species of tang. As long as you feed your tangs several times a day, however, most of them will leave your other tank inhabitants alone.


The Top 5 Tang Species for Your Reef Tank

Tangs belong to the Acanthuridae family of fishes and there are about 90 different species. With so many options to choose from, it can be difficult to decide which species of tang to add to your reef tank. Below you will find a brief review of some of the top most recommended species of tang for a reef tank:


1. Yellow Tang (Zebrasoma flavescens) – Named for its overall yellow coloration, the yellow tang grows up to 8 inches in length and it is one of the easier tang species to care for. These fish are native to Hawaii which is why they are sometimes called the yellow Hawaiian tang. This species is incredibly active so they need at least 100 gallons with plenty of open swimming space in order to thrive. These fish can become territorial toward other tangs, though unrelated species are usually left alone. Yellow tangs feed on marine-based algae and seaweed as the majority of their diet, though they may also accept meaty foods as well as fresh veggies. If you are looking for a hardy species of tang for your reef tank, the yellow tang is a great option to consider.


2. Blue Tang (Paracanthurus hepatus) – One of the most identifiable species of tang, the blue tang is named for its brilliant blue coloration. These fish have yellow caudal fins lined in black with a bold black marking running along the top half of the body from the eye to the tail. Blue tangs grow up to 12 inches in length and they are a semi-aggressive species that is moderately difficult to care for. Due to their size and activity level, blue tangs need a tank at least 180 gallons in capacity and they shouldn’t be kept with other tangs. The blue tang does well in reef tanks where it can feed on algae growths, though you will still need to supplement his diet several times a week with marine-based algae and seaweed plus some meaty foods on occasion. 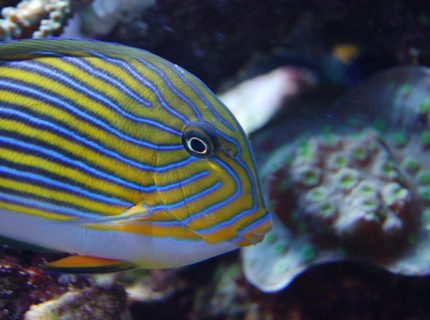 3. Achilles Tang (Acanthurus achilles) – The Achilles tang only grows to about 8 ½ inches in length but it is classified as a semi-aggressive species and one that requires expert level care. These fish are native to Hawaii and they are sometimes called the red-tailed surgeon due to the red-orange markings on their tails and fins – the overall body color for this species is dark brown to purple. Achilles tangs need a tank at least 180 gallons in capacity with strong water flow and plenty of open swimming space. These fish will get along with other fish besides tangs and surgeonfish, though you should still be careful about what species you pair them with. Like most tangs, the Achilles tang needs a diet of marine-based algae and seaweed supplemented with meaty foods.


4. Purple Tang (Zebrasoma xanthurum) – This tang species grows up to 10 inches in length and it is classified as a semi-aggressive species – this means that they may not do well if kept with other tangs, especially tangs of similar size and color. Purple tangs are sometimes called yellowtail sailfin tangs because they have an overall purple-blue coloration with a yellow tail and yellow pectoral fin accents. This species of tang is native to the Red Sea it, though it usually lives singly, it can sometimes be found in schools. Purple tangs are one of the most colorful species of tang and they generally do well in reef tanks with adequate lighting, plenty of swimming space, and places to hide. These fish should be offered a staple diet of marine-based algae and seaweed supplemented with meaty foods and fresh veggies.


5. Convict Tang (Acanthurus triostegus) – This species of tang is native to Africa, Fiji, Sri Lanka, Tahiti, and the Solomon islands and it is a medium-sized species that grows up to 8 inches in length. Convict tangs have an overall white or silver coloration with six vertical black bars. Because these fish are fairly large and very active they require a large tank of at least 125 gallons with plenty of open swimming space. Convict tangs should not be kept with other tang species, though they can get along with other convict tangs if they have adequate space. This species is difficult to breed in the home aquarium, partially because there are no distinguishing characteristics to separate male from female. These tangs will eat meaty foods but marine-based algae and seaweed should make up the majority of their diet.


Now that you know a little more about tangs and the various species you can make an educated decision regarding which one is the right choice for your tank. Once you choose a species, be sure to do your research to learn about that species’ tank requirements and adjust your tank parameters accordingly.


comments powered by Disqus
PREVIOUS
ARTICLE
Marine Shrimp for the Saltwater or Reef Tank
Marine shrimp can be a useful addition to the saltwater tank - just be sure to pick the right species.
NEXT
ARTICLE
What's That? The Top 10 Strangest Looking Saltwater Fish
There are some odd=looking animals out there but these ten saltwater fish are among the strangest.