TIPS FOR KEEPING NOCTURNAL FISH IN THE MARINE AQUARIUM

Understanding Nocturnal Aquarium Fish
Aquarium fish are generally divided into two categories – freshwater or saltwater. Within each category, however, there are different subcategories. One way to further divide the category of saltwater fish is by the time of day during which they are most active. Diurnal marine fish are those species that are most active during daylight hours while nocturnal fish are most active during the night. There are also crepuscular species which tend to be active around the hours at dawn and dusk. Some species of fish can adapt to becoming more active during another time of day while others remain consistent. 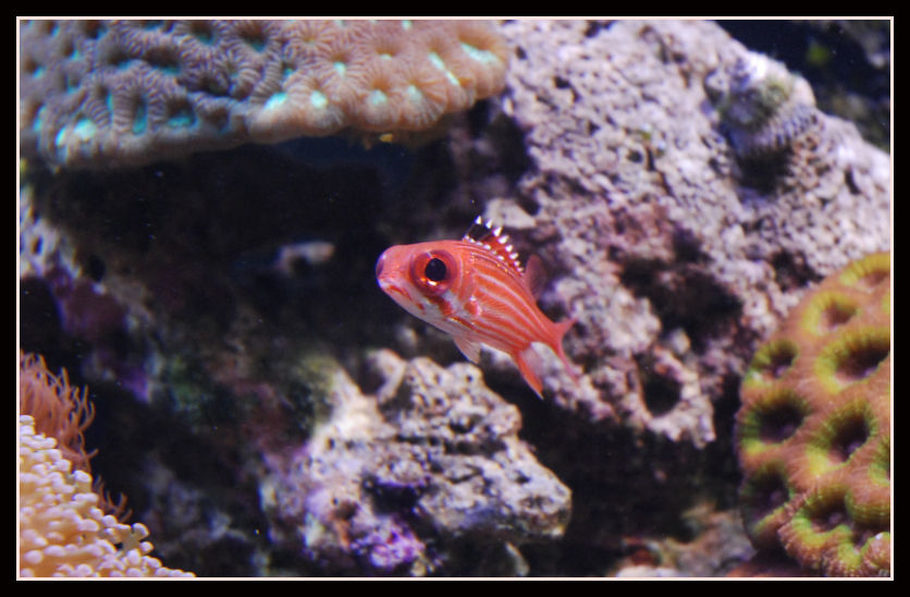 In order to thrive during the night, nocturnal species of marine fish have developed certain adaptations. Here is a quick overview:
Having an understanding of the adaptations and restrictions that nocturnal aquarium fish have developed can help you to better understand their needs. The more you know about nocturnal marine species, the better you will be able to simulate their native environment in your home aquarium.

The Top Nocturnal Species for Marine Tanks
There are many different species of nocturnal marine fish, though not all of them are practical for keeping in the home aquarium. Here are some of the top species of nocturnal fish to consider for your own marine tank at home:
Cardinalfish – This type of fish includes species in the family Apogonidae, a group of ray-finned fishes. Cardinalfish are usually fairly small and they also tend to be fairly brightly colored, usually in yellows and reds. Popular species for the home aquarium include the Pajama Cardinalfish (Sphaeramia nematoptera), the Flame Cardinalfish (Apogon spp.) and the Five Lined Cardinalfish (Cheilodipterus quinquelineatus).
Squirrelfish – These fish generally grow to a maximum size around 5 inches and they are largely red in color. Squirrelfish do best when kept in small groups and they feed on a diet of plankton, small fish, and marine invertebrates. Some of the most popular species for the home aquarium include the Glass Eye Squirrelfish (Heteropriacanthus cruentatus), the Sammara Squirrelfish (Neoniphon samara) and the Striped Squirrelfish (Sargocentron xantherythrum).
Soldierfish – This group of fishes have large, serrated scales as well as large, ovular eyes. Most soldierfish are red in color and they look similar to squirrelfish except that they are broader and don’t have such a pointed snout. Some popular species of soldierfish for the aquarium include the Scarlet Fin Soldierfish (Sargocentron sp.) and the Big Eye Black Bar Soldierfish (Myripristis sp.). 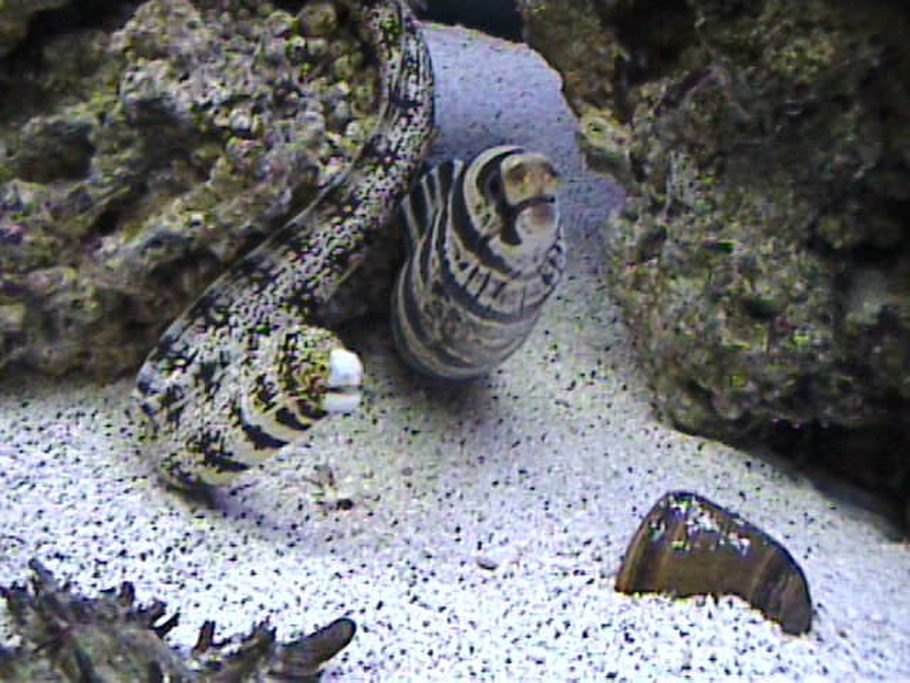 Scorpionfish – One of the strangest looking groups of nocturnal fish, scorpionfish are also some of the most venomous fish in the world. These fish have sharp spines that are coated with a venomous mucus and they are generally colored to blend with their surroundings.
Eels – Not only are most eels nocturnal, but they are very unique and interesting inhabitants to add to your aquarium. The Ghost Eel (Pseudechidna brummeri) is particularly intriguing – this species is mostly white in color and can grow up to 40 inches in length. The Snowflake Eel (Echidna nebulosa) is another option, named for its speckled pattern. Keep in mind that most eels are at least semi-aggressive when you are adding other fish to your tank.
Invertebrates – In addition to the species of fish already discussed, there are many marine invertebrates that are nocturnal. For example, many species of shrimp, crab, and other crustaceans are nocturnal as well as starfish and mollusks.
Keep in mind that even though nocturnal fish may spend most of the day hiding, they still count toward the maximum biological load of your aquarium. If you’re using the “one inch of fish per gallon” rule, be sure to factor in both your nocturnal and diurnal species because both will produce waste which will have an impact on the water quality in your tank.

Tips for Simulating Nocturnal Lighting
In order to ensure that your nocturnal tank inhabitants thrive, you’ll need to imitate their natural environment as closely as possible and that means simulating nocturnal lighting. Though there was a time when the only option for aquarium lighting was traditional white lighting, there are now many different options to choose from. Among these new options is something truly unique – moon lights. Moon lights are LED fixtures the simulate the natural light of the mood, gently illuminating nocturnal aquarium life without interfering with their normal behavior. This type of lighting allows you to observe your nocturnal aquarium habitants in their natural life without disturbing them. 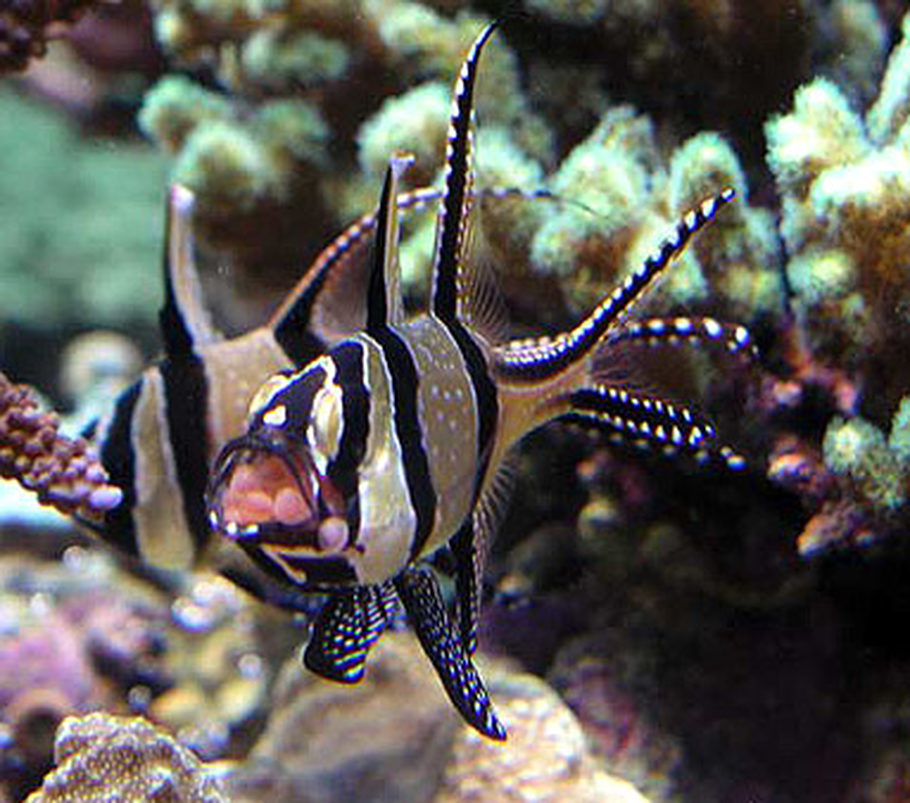 Moon lights have a variety of different benefits in addition to giving you the opportunity to witness your nocturnal aquarium habitats in their natural environment. This type of lighting is very energy-efficient because it runs on LED – these lights also generate virtually no heat which is an improvement over standard incandescent and high-output fluorescent light fixtures. To make the best use of your moon lights, set them upon an automatic timer to alternate between 12 hours of daylight and 12 hours of moon light. This will help to create a natural environment for both your diurnal and your nocturnal aquarium inhabitants. If you have corals in your tank, you may need to make some adjustments because they need a brief period of total darkness before the moonlight appears.

Other Tips for Setting Up and Maintaining a Nocturnal Tank
The most important thing to think about when setting up your nocturnal aquarium is giving your fish places to hide during the day. Live rock is a staple decoration for marine tanks but you need to use it wisely to create caves and crevices where nocturnal fish can hide. Aside from decorations, you also need to think carefully about your lighting system. If you plan to keep corals in your tank, you’ll need to make sure that your daytime lighting meets those needs and that your nocturnal lighting system can be integrated as well. You may also have to adjust your feeding schedule to accommodate nocturnal aquarium fish since they will be unlikely to venture out of hiding for food during the day.
Cultivating and maintaining a marine tank environment comes with many challenges, but that is exactly why many aquarium hobbyists like them so much. If you’d like to take your marine tank to the next level, consider adding some nocturnal aquarium inhabitants and outfit your tank with moon lights.