Written by Kate Barrington Updated April 06, 2018
Moray eels can be a challenge to keep in the home aquarium but they are well worth it.
When you think of keeping eels in the home aquarium, you probably don’t think of moray eels. Moray eels are usually very large and they have a reputation for being finicky about the food they will and will not eat. Still, if you are up to the challenge, moray eels can make for a very interesting addition to the saltwater aquarium.


If you are thinking about adding moray eels to your tank, make sure you take the time to learn everything you can about them. Not only do you need to learn the differences between the species, but you should familiarize yourself with their tank requirements and nutritional needs. You will find all of this information and more in this article.

Moray eels are not a single species of eel but a family of saltwater eels containing fifteen different genera and about 200 different species. Most moray eels are found exclusively in saltwater environments, but some have been spotted in brackish environments and, occasionally, in freshwater. Moray eels vary in size from the tiny Snyder’s moray which only grows up to 4.5 inches to the slender giant moray which grows to 13 feet long. Some moray eels can even reach weights over 50 pounds like the giant moray which grows up to 9.8 feet and 66 lbs. 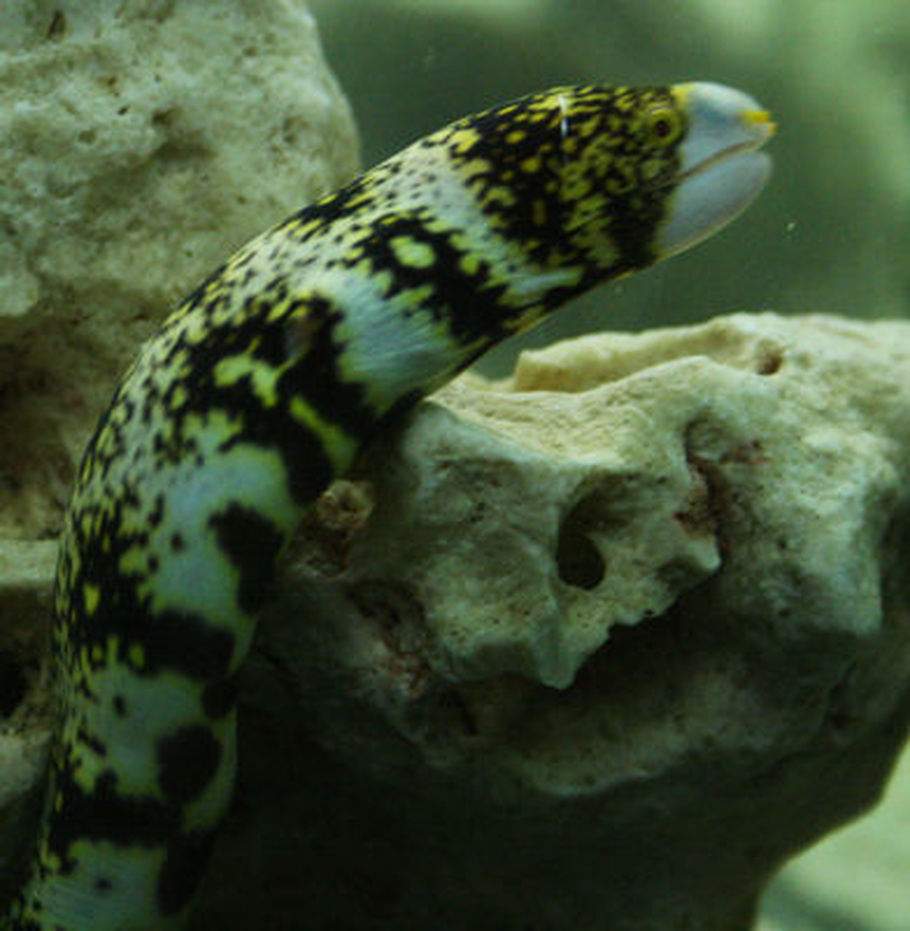 The moray eel has a very long, slender body with a dorsal fin that runs all the way along the back to the end of the tail. Most moray eels do not have pelvic or pectoral fins – this gives them a snake-like appearance. Different species of moray eels exhibit different colors, but most species have some kind of pattern like spots or stripes. Perhaps the defining characteristic of moray eels, however, is their wide jaws and sharp teeth. Many moray eels eat fish, though some of the smaller species feed on crustaceans.


One of the most interesting behaviors moray eels exhibit in the wild is cooperative hunting. Certain species of fish have been known to join forces with giant morays in their hunt for food – the morays sneak into crevices to flush out their prey so the fish can catch them. Due to their sharp teeth, moray eels are often viewed as aggressive or vicious animals but, in most cases, they would rather hide from an enemy than fight. This is certainly the case with humans – they only attack as self-defense if their burrow is disrupted or if they are being hand-fed and mistake a finger for food.

Not all moray eel species are recommended for the saltwater tank at home. Some of them can be very finicky and many will eat the fish in your tank. Some of the smaller species of moray, however, are small enough to be kept in captivity and are not large enough to eat other reef species you might keep in your tank. Before getting into the species that do well in saltwater tanks, however, you should learn a little bit about the tank requirements and nutritional needs for moray eels.


The first tank requirement you need to consider for moray eels is tank size – keep in mind that many species grow several feet long so you will probably need a very large tank to keep moray eels. These eels also tend to produce a lot of waste so you will need a high-quality filtration system. This factor also usually precludes moray eels from being included in reef tanks where the inhabitants are very sensitive to changes in water chemistry. If you do keep moray eels in a reef tank, limit your other inhabitants to corals and anemones – the moray eel should be the only fish in the tank. 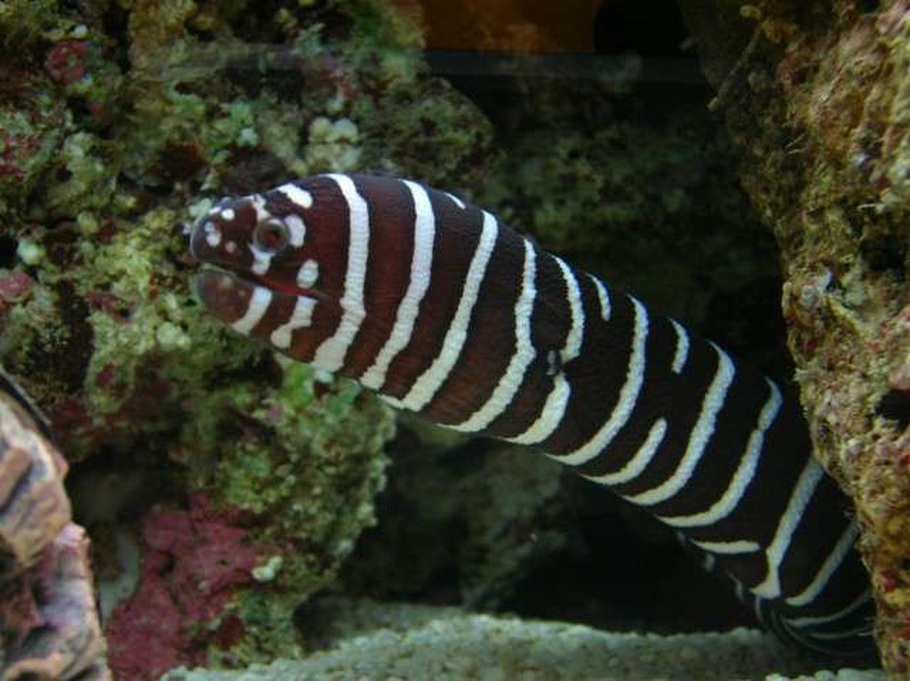 In terms of nutrition, most moray eels require a diet of live or frozen foods – this can get very expensive depending on the size of your moray. It also contributes to the amount of waste these eels produce. In order to keep your moray healthy you’ll need to provide a varied diet of fresh fish, shrimp, crab, octopus, squid, and various crustaceans. To maintain water quality in your moray eel tank you should test your water parameters on a weekly basis and do frequent water changes – a 35% change each week is recommended. Depending on the size of your tank, this can be a major task to undertake.

There are about 200 different species of moray eel but not all of them are recommended for the home aquarium. Below you will find a list of some of the best species to keep in the saltwater tank:


Snowflake Moray Eel – Perhaps the easiest species of moray eel to keep is the snowflake eel. This species grows to a maximum length of 30 inches and can be kept in a tank at least 40 gallons in capacity. The snowflake eel subsists mainly on shore- and rock-dwelling crabs, though it may also accept small fish and mantis shrimp. This species poses less of a threat to other tank inhabitants than many morays and they generally adapt very well to the tank environment. Keep in mind, however, that most morays will become aggressive when food is in the water. To prevent the eel from biting you or other fish in the tank you should use a feeding stick.


Zebra Moray Eel – This species grows up to about 3 feet in length and can be kept in a 40-gallon tank. Zebra morays are usually found in rocky coral reefs and they are a fairly passive species by nature. These eels eat mainly crabs, shrimp and snails and their head is uniquely designed to crush shells. Zebra morays rarely venture out into the open – they do most of their hunting behind various reef structures. This species sometimes takes a while to adapt to captivity and may go through a long starvation period before accepting prepared foods.


Chainlink Moray Eel – The chainlink moray is named for its unique color pattern that looks like chain links all over the body. This species grows up to 30 inches long and can be kept in a minimum tank size of 40 gallons. Chainlink morays are very reclusive – they will spend most of their time hiding in the rockwork and may only venture out to feed at night. These morays feed primarily on crabs, though they can be weaned onto prepared foods. This species takes a while to adjust to life in captivity and may always prefer to hide until it gets hungry.


By now it should be clear to you that keeping moray eels in a saltwater tank is no easy task. Still, if you have your heart set on it then the information provided here will help you to get started.


comments powered by Disqus
PREVIOUS
ARTICLE
Top Recommendations for Tank-Raised Saltwater Fish
When purchasing saltwater aquarium fish, you need to think about whether the fish are tank-raised or captive-bred.
NEXT
ARTICLE
Marine Shrimp for the Saltwater or Reef Tank
Marine shrimp can be a useful addition to the saltwater tank - just be sure to pick the right species.