AQUARIUM FISH MEDICATIONS - DO OR DON'T?

Written by Kate Barrington Updated November 04, 2015
Learn about how aquarium fish medications work and what diseases they may be used for.
The key to keeping your aquarium fish happy and healthy is to offer them a high-quality diet and to keep your tank water clean. Even if you keep up with all of your routine maintenance tasks, however, there may still come a day when one or more of your fish get sick.
For many aquarium hobbyists, a sick fish warrants a trip to the pet store for medication. What many aquarium hobbyists do not realize, however, is that sometimes aquarium medications can do more harm than good. So how do you know when to use medication and when to try something else? In this article you will learn the basics about using aquarium medications.


What Diseases Respond to Medication?

If you pay a visit to your local pet store and walk down the aquarium aisle you will find a number of medications for all kinds of different diseases. Unfortunately, many of the medications on the shelf are unlikely to actually have any effect on your fish. Certain diseases simply do not respond to medication which means that you’ll have to try something else. There are, however, two diseases which consistently respond to medication – fungus and ich.


Cotton Wool Disease – The name cotton wool disease is applied to fungal infections that affect the skin, mouth, or fins of your fish, causing fluffy white growths to form. These growths often appear in areas that have previously been affected by fungus, parasites, or trauma. There are several different types of fungus which can cause this type of growth but the most common are Achyla and Saprolegnia. Cotton wool disease typically responds to treatment with aquarium salt or antifungal agents like phenoxyethanol.


Gill Rot – This fungal infection is fairly uncommon in aquarium fish, but it does occur and it can be deadly if not properly treated. When a fish is affected by gill rot it typically exhibits gills covered in mucus and it may be gasping at the surface for air. This type of infection is usually caused by the fungus Branchiomyces and it is most commonly seen in fish that are stressed by high ammonia or nitrate levels. Long-term therapy with increased oxygen levels and phenoxyethanol may be effective, though it is more common for treatment to be completely ineffective. 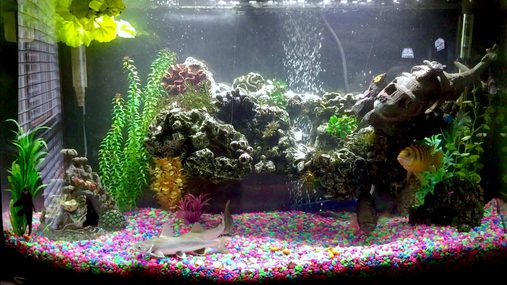 Egg Fungus – This type of fungus is very common, especially if the eggs are damaged or the water quality in the breeding tank is low. The fungus responsible for this are usually Achyla or Saprolegnia and they are present in most aquariums but generally do not manifest as infections unless the water quality declines. Unfortunately, once an egg develops fungus it cannot be treated but treating the tank with Methylene Blue may help to prevent infection.


Systemic Fungal Infections – Systemic fungal infections are fairly rare in fish and they are notoriously difficult to treat. The main type of fungus known for causing systemic infections is Icthyoponus and it can really only be diagnosed with certainty through a post-mortem examination. Fish with systemic fungal infections generally show signs of poor health and they will continue to decline until they die. In some cases, treatment with Malachite Green has been effective.


The only other disease that frequently responds to medication is Ich – this is the nickname for a protozoan infection known as Ichthyophthiriasis which is caused by the protozoan parasite Ichthyopthirius multifiliis. This disease is highly contagious and it is most commonly seen in fish that are already stressed, particularly in cases of poor water quality. This disease manifests in the form of tiny white spots on the fins, gills, and bodies of infected fish and it can spread rapidly. Treatment of this disease involves increasing tank temperatures to speed up the life cycle of the parasite in addition to treatment with Formalin or Malachite Green.


If you take a closer look at the medications available at the pet store, you will likely see things like antibiotics and medicated food. The problem with antibiotics is that they will not work unless you are able to identify the exact type of bacteria causing the disease and then match the antibiotic accordingly. Even if the medication does work to kill the bad bacteria, it will also kill off the beneficial bacteria in your tank which will cause a bigger problem. If you kill the beneficial bacteria in your tank it will cause the tank to re-cycle and that could result in toxic levels of ammonia and/or nitrate. 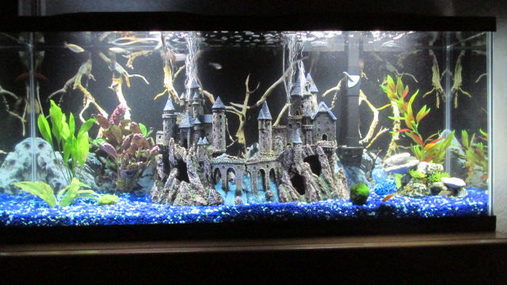 The second option is to only use aquarium salt to treat infections – the most effective way to do so is to give your fish a salt bath. To prepare a salt bath for your fish, fill a bucket with aquarium water and make sure it matches the temperature and water chemistry of your existing tank water. Next, add about four teaspoons of aquarium salt per gallon of water and stir until it is completely dissolved. Next, catch your fish with a mesh net and place it gently in the salt bath. Allow the fish to soak for up to 30 minutes as long as it doesn’t show any signs of adverse effects. After the salt bath, place the fish in a quarantine tank and monitor for improvements.


As is true for any treatment method, salt baths do have their disadvantages. For one thing, it can be difficult to determine the right dosage for the problem at hand. Second, salt baths can be stressful for your fish – that is why you should limit the exposure and keep a close eye on your fish during and after the salt bath. It is also important to note that certain types of fish do not respond well to salt baths. This includes catfish (because they do not have scales to protect them) as well as certain species of tetra and barb. For these fish you may want to use a weaker concentration and limit the exposure.

When one of your aquarium fish falls ill, your first move should be to quarantine it in order to prevent the spread of disease. If you suspect that your fish is sick with Ich, however, you should treat the entire tank for the infection. Make sure to follow dosage instructions closely and err on the side of under-dosing rather than over-dosing your tank. Monitor your fish closely after administering medication to make sure they aren’t having an adverse reaction and test your tank water frequently to make sure the medication doesn’t have a negative effect on your water chemistry. You should also read the instructions to see whether you need to remove the activated carbon from your aquarium filter.


Dealing with aquarium fish diseases can be difficult because there are so many different ways that aquarium fish disease can manifest. Not only can it be tricky to identify the disease, but treatment is tough as well. Do yourself a favor and take the time to make a proper diagnosis then select the best treatment option for your fish.

comments powered by Disqus
PREVIOUS
ARTICLE
How to Build an Automatic Fish Feeder
An automatic fish feeder can be a great tool if you have to go out of town or want to regulate your feeding schedule for fish.
NEXT
ARTICLE
The Right and Wrong Way to Catch Fish
Stop chasing your fish around the tank with a net and learn the right and wrong way to catch aquarium fish!

Tips for Spotting Signs of Distress in Your Fish Before It's Too Late
When you see signs of stress in your fish, you can then take steps to identify the source of that stress and then to resolve it before it becomes a major issue.
What Are GloFish and How Do You Care for Them?
If you've ever seen those fluorescent fish at your local pet store and wondered what they are, you'll learn everything you want to know in this article.
How to Keep Your Tank Safe During a Power Outage
A power outage may only be a minor inconvenience for you but, for your aquarium fish, it can be deadly.
Spring Cleaning: How to Clean and Give Your Old Tank New Life
Keeping your tank clean is about more than just aesthetics - it also affects your fish.
Aquascaping Tips to Reduce Aggression in Fish
Keeping the peace in a tank full of aggressive fish can be tricky but smart aquascaping can help to diffuse the tension.
The Right and Wrong Way to Catch Fish
Stop chasing your fish around the tank with a net and learn the right and wrong way to catch aquarium fish!
Aquarium Fish Medications - Do or Don't?
Learn about how aquarium fish medications work and what diseases they may be used for.
Creative
Keeping your aquarium clean doesn't have to be a chore with these simple aquarium cleaning "hacks".
What You Need to Know About All-in-One Aquariums
Starting a new tank can be time-consuming, especially if you have to choose all of your own equipment.
How to Build an Automatic Fish Feeder
An automatic fish feeder can be a great tool if you have to go out of town or want to regulate your feeding schedule for fish.
History Of Fish Keeping As A Hobby
Focuse on fish keeping for pleasure as opposed to keeping fish around as a food source.
Do You Know What You Are Feeding Your Fish?
Not all aquarium fish food is created equal.
Simple Tips for Building a Saltwater Tank Without Breaking the Bank
There is nothing more beautiful than a thriving saltwater tank, but these tanks can be expensive to set up and maintain.
How to Buy Aquarium Supplies Online
Why buy Aquarium Supplies online?
3 Problems Every Aquarist Can Avoid
Learn three common problems every aquarist can avoid.
Why Keep Aquarium Fish?
Benefits of Fish Keeping.
How Cycling the Tank Can Stress Your Fish
The nitrogen cycle is essential for keeping your tank healthy but it can also be very stressful for your fish!
Read more articles (17)