HOW TO HUMANELY EUTHANIZE YOUR FISH

Written by Kate Barrington Updated February 28, 2020
If your fish is suffering, you may want to consider euthanasia as an option to humanely end his pain.
There is nothing quite to heartbreaking as losing a beloved pet, especially if you have tried your best to treat him. You have tried everything to nurse your fish back to health but to no avail -- it is dying and in distress. Many people do not even realize that euthanasia is an option for fish, but if your fish is in pain and slowly dying, it is an option you might want to consider. Some people still decide to never euthanize their fish -- they would rather just let nature take its course with the fish and let the fish die on its own. You can go this route or you can choose to speed things along for the sake of your pet. Most people determine their actions by considering the fish's quality of life in its last days. 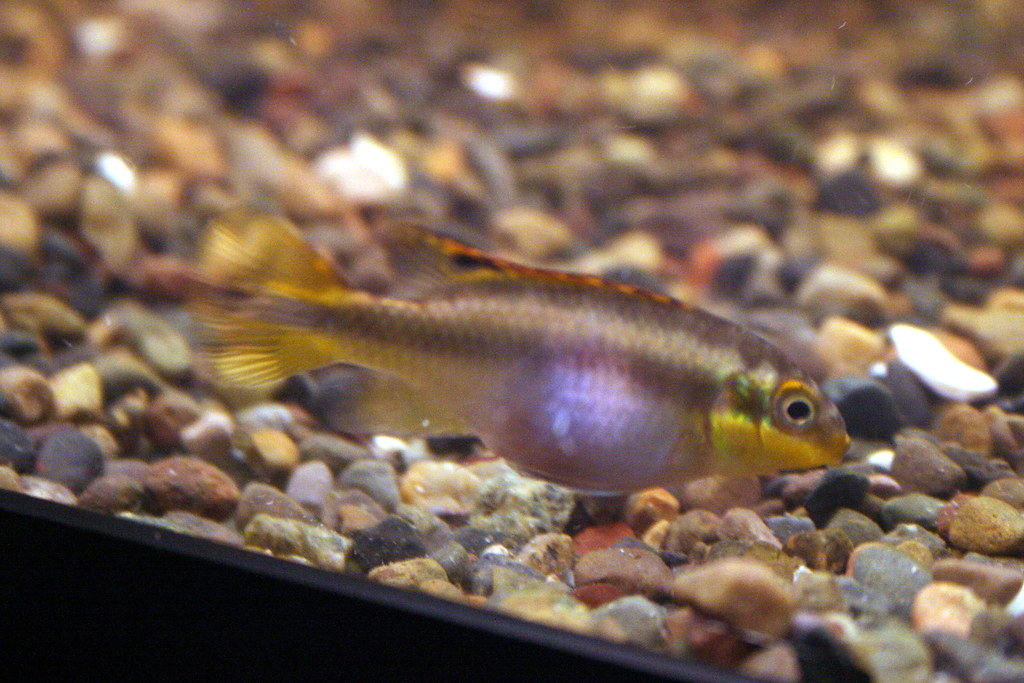 By Flickr user Genista
Euthanasia Options for Fish
There are several different options for the euthanasia of fish, many of which will be described here, in order of popularity. These methods are divided with a focus on "old school" methods and on newer, more humane methods. When researching this article, we looked at public opinion on the Internet, the American Veterinary Medical Association (AVMA)'s opinion on euthanasia and how many universities across America euthanize fish for research purposes.
Many colleges use AVMA as their standard in determining the humane way to euthanize animals. The AVMA puts out a report about every decade where they survey acceptable means to euthanize animals. The most recent report was released in 2013.
Most college and universities have acceptable methods for euthanizing animals for research. The University of Washington's Institutional Animal Care and Use Committee released their policy for euthanizing fish in 2002. George Mason University published their own standard operating procedure where they have categorized methods of euthanasia.
OLD SCHOOL METHODS
These methods are the most common among fish-hobbyists, especially those that did not have the opportunity to spend much time researching euthanasia options. These methods, however, are outdated and are generally not considered to be the most humane options available.
Putting the Freeze on Sparkles
Freezing is a commonly used method for euthanizing warm water fish. To freeze your fish, freeze water in a small bag until it becomes slushy. Next, place your fish in the water and continue to freeze it. The folks at Web Web Media advocate using the freezer but other people feel that this method must be somewhat discomforting to the fish. Out of all the "old-school" methods, this process seems most inhumane. The AVMA does not advocate freezing fish as an acceptable method of euthanasia; the only way they would approve of cooling would be to deep freeze an animal that is already under deep anesthesia.
Decapitation - Swift and Surely
This method is self-explanatory – you simply remove the fish from the water and use a sharp knife to chop off its head, thus ending its life. The fish might feel something as you slice the knife in; even it is momentary pain. At least this method is quick (as long as you do not hesitate once you start the task). The AVMA believes that this can be acceptable as long as it is coupled with anesthesia to begin with.
Carbon Dioxide
Carbon dioxide is naturally present in the water your fish live in anyway – it is a result of the respiration process. It can also be used as a method to euthanize fish because the addition of carbon dioxide to the water decreases oxygen levels, thus causing your fish to suffocate. Alka Seltzer is a popular source for carbon dioxide to be released in water. This method may seem innocuous enough, but most people who have used this method say that their fish thrashed around a little bit just as if the fish were out of water (here is one person's story). You may need to decapitate or freeze the fish afterwards to ensure death. The AVMA supports this method and many universities advocate using this method as well (see the University of Washington's Policy for Euthanasia for Fish Species). Dr. Craig Harms (http://www.petplace.com/fish/euthanasia-in-fish/page1.aspx) describes this method; 8 tablets of Alka Seltzer is required per gallon of water.
Snapping the Neck
Some people effectively snap the neck by hitting the fish over a hard surface or on the kitchen counter (covering the fish in a plastic bag first). Given that decapitation would be a more certain way of severing the neck, decapitation is a preferred method over "snapping" the neck.
GENTLER WAYS TO DEEP SIX THE FISH
The euthanasia methods used above are those which are most commonly used by the average aquarium hobbyist to euthanize their fish. In this part of the article, we will discuss other methods of euthanizing your fish. Most of these methods are much more common in the veterinarian/university setting than at home. 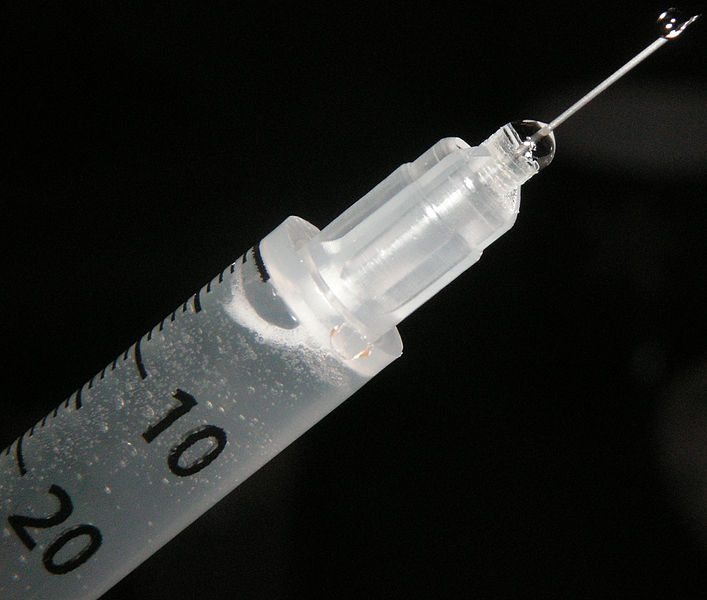 Syringe Needle by Psychonaught via Wikimedia Commons
Death by Overdose with Anesthetics
·         Tricaine Methanesulfonate (TMS). This method is probably the most quoted by people with much experience in euthanizing fish humanely (i.e. for university experiments, etc.). TMS is also known as MS222 and commercially is known as Finquel. You can buy it from a pet supply store; Drs. Foster and Smith carry it; a bottle costs $24.99 plus shipping and handling. You can also buy this from PondRx ($14.99 plus shipping and handling for a 5 gram bottle) and Argent Labs. According to fish biologist Meyers' blog, simply by doubling the regular dose that you would use to anesthetize the fish will euthanize it. This substance is FDA approved for anesthetizing and euthanizing fish; it is the only product that is FDA approved to anesthetize fish.
·         Benzocaine Hydrochloride is a drug requiring a veterinarian's prescription; you cannot buy it over the counter for your fish. The AVMA advocates the use of Benzocaine hydrochloride but not straight Benzocaine. Benzocaine is not water soluble and must be mixed in water with acetone or ethanol, both can irritate fish tissue.
·         Clove Oil/Vodka Method. Many fish keepers advocate using clove oil to anesthetize fish. You must anesthetize them first with the clover oil and dispatch the fish with another method – you can also give them such a strong concentration of clove oil that the clove oil alone will kill them. This article probably covers using the clove oil/vodka method is most detail:What is the Most Humane Way to Euthanize a Fish by wiseGeek.com. This process is not advocated by the AVMA in their 2000 report due to lack of research.
Death by Injection - Barbiturates
Injecting barbiturates into the fish’s bloodstream is another humane way to kill fish as they will slip into unconsciousness first and then on to death. The problem with this method is you will find it difficult, if not impossible, to get your hands on it since it's a controlled substance. Your vet may be able to do this for you. The AVMA advocate only using Sodium Phenobarbital as other barbiturates may cause pain when injected. Vets use this method all the time for animals that they must euthanize.
Making the choice to euthanize a pet can be difficult, but it may be what is best for your fish. To help you make the decision, think about the quality of life your fish currently has. If your fish has been suffering from a severe illness and none of the treatment methods have been working, euthanasia might be the best choice. It may seem harsh to end your fish’s life, but it might actually be the kindest thing you can do – especially if the fish is stressed and in pain. If you do decide to euthanize your fish, just be sure to follow one of the recommended methods above so you do not end up causing your fish more pain.
What to do with your Dearly Departed Pet?
Now that you have a dead fish on your hands, you could choose to bury them in your backyard (follow your local ordinances on the matter), wrap them up and throw them out with your regular trash, or contact your veterinarian and ask them to dispose of your fish for you.
comments powered by Disqus
PREVIOUS
ARTICLE
What Is A Refugium
Why people use refugiums with their aquariums?
NEXT
ARTICLE
Understanding The Nitrogen Cycle
Understanding the nitrogen cycle and its importance to a healthy tank.

HOW TO HUMANELY EUTHANIZE YOUR FISH
If your fish is suffering, you may want to consider euthanasia as an option to humanely end his pain.
TRENDING: GLOW IN THE DARK FISH
Glow in the dark fish may not be a new trend but new additions to the market have recently been made -- glow in the dark convict cichlids and angelfish.
AQUARIUM FISH NEWS: BILL INTRODUCED TO LIMIT AQUARIUM FISH COLLECTING
The saltwater aquarium industry takes millions of fish from oceans around the world each year.

How To Humanely Euthanize Your Fish
If your fish is suffering, you may want to consider euthanasia as an option to humanely end his pain.
Stacking Rocks in Your Aquarium
Learn how well stacked rocks can add personality and a natural look to your aquarium.
What Is A Refugium
Why people use refugiums with their aquariums?
All Glass Aquariums
History of Fish Tank Materials.
Acrylic Aquariums
Pro and con arguments for using acrylic tanks, common sizes, etc.
Changing The Water
Tips to make changing the water easier.
Aquarium Screensavers
Different kinds of screensavers, top aquarium screensavers available today.
Understanding The Nitrogen Cycle
Understanding the nitrogen cycle and its importance to a healthy tank.
Aquarium Stands
Discuss the role that aquarium stands have on the fish keeping hobby.
Custom Aquariums
This article delves into the pros and cons of custom built aquariums - and more.
Read more articles (10)