How the Nitrogen Cycle Helps Recycle Metabolic Wastes
In nature, when animals expel their wastes and plants decay, anaerobic bacteria in the environment break down waste into harmless nitrogen that is released into the air through the ground and water. If nature did not have some mechanism for using the "waste" material, eventually, we would run out of good stuff. Luckily, through the participation of bacteria using these waste substances, harmful materials (to animals) like ammonia are converted into something harmless and useable again. Two kinds of bacteria participate in this cycle: Nitrite Bacteria (Nitrosomonas) and Nitrate Bacteria (Nitrobacteria). This process of breaking down animal wastes is called Nitrification – the ammonia produced by animal waste is converted into nitrite by nitrosomonas which is then converted to nitrate by nitrobacteria.

What Happens When You Keep Fish In Tanks?
Out of fish waste, the chemical we worry about most in a tank is ammonia since it is most toxic of the metabolic byproducts to fish. In the tank, without proper filtration, the ammonia level accumulates in the water, building up to toxic levels eventually killing the fish. Besides the ammonia level, the actual level of debris would also reach a critical mass rendering the water unlivable for inhabitants. Fish live in water and not mud! 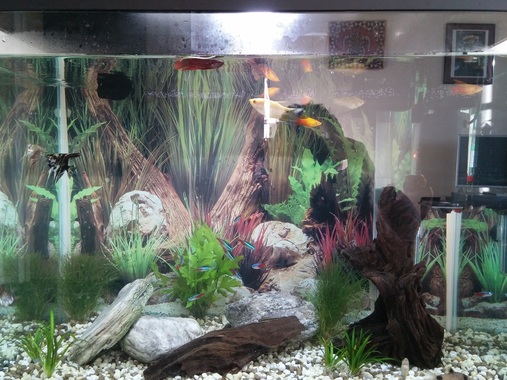 Establishing the balance challenges every owner of a new tank, even experienced fish-keepers. When new hobbyists jump the gun and put their fish in before their bacteria levels are high enough, they will unfortunately experience "New Tank Syndrome." New Tank Syndrome is when fish, recently introduced to a new tank, die off due to high levels of ammonia, nitrates and nitrites in the water before sufficient bacteria levels were established. Before you can safely introduce fish to a new tank, the tank must be "Cycled".

To cycle a tank, you need to add a form of ammonia and a "starter" colony of bacteria to the water. The old school way to cycle a tank would be to introduce the hardiest fish you could find and let them produce enough waste to get a colony of bacteria started. This method is bad because you end up sacrificing the "starter" fish since the biological filter will not get established fast enough to clear the water of ammonia levels for those fish. When nitrite levels remain at zero for a week, the tank is considered matured and ready for live inhabitants. Normally, the nitrogen cycle takes two to six weeks to establish in a new tank. Rarely do new fish hobbyists wait two to six weeks to fill their tanks!

How To Kick-Start Your Nitrogen Cycle In a New Tank
In general, you can cycle a new tank without sacrificing starter fish. You need an ammonia source and a bacteria source. This method of cycling is referred to as “seeding”. To "seed" your tank, you could try any of the following ways:

1.) Use water from an established tank that you already know is free from parasites and other harmful pathogens. You can add it to your new tank to introduce both ammonia and live beneficial bacteria to your tank.

2.) Use live rock from an existing tank or new live rock to get the nitrogen cycle started before you add your fish. The live rock will not be negatively affected by ammonia levels in the tank and it should produce enough waste material to get your beneficial bacteria started. The process might still be fairly slow, but you won’t be putting any fish at risk. 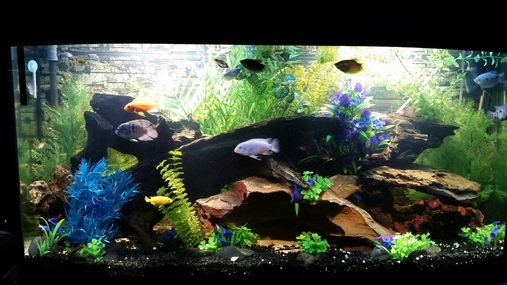 3.) A third method for seeding a tank involves adding small amounts of fish food without adding any fish. Over time, the fish food will break down and decay, producing ammonia that the beneficial bacteria can feed on and reproduce.

4.) A fourth option is to seed the tank with ammonia to jumpstart the nitrogen cycle. Adding ammonia directly to your tank will cause a bacterial bloom – the bacteria will reproduce rapidly and eventually the ammonia and nitrite levels will even out, at which point you can add your fight.

How to Check Your Tank's Nitrogen Cycle
To keep track of the progress of the nitrogen cycle in your new tank, you’ll have to test the water on a daily basis. When monitoring your tank water, any ammonia in the water is too much but just because you get the ammonia level down does not mean you are out of the woods. Too much nitrite and nitrate in the water is not good for fish, either. To check the tank's water quality as regards to ammonia, nitrite, and nitrate levels, you will need to use a test kit.

Test kit choices include powder tests, liquid tests, and strip tests. All of these tests are "colorimetric" meaning you compare how the sample water compares to a color chart. You can buy electronic monitors for pH and oxygen level but you are stuck testing ammonia, nitrite, and nitrate levels the old fashioned way. When buying these tests, consider you should test your tank water at least once a week (most experts advocate every other day or daily). Below you will find an overview of each test option including pros and cons:

1. Dry Regent/Powder Tests
With dry regent or powder tests, you take your tank water and pour it into little test tubes then add test powders for each test type. Next, you mix powder into the sample water and then compare the test tube water with a color chart to see what the level is for each chemical monitored. The main pro of this method is that it is inexpensive. On the downside, the powder is messier to use than liquid or strip tests. You’ll also need to keep track of your test tubes to use them multiple times. Check the expiration date for the powder as well - using reagents after their expiration day may result in inaccurate test results.

Cost. Aquarium Pharmaceuticals puts out a FasTestT Ammonia, Nitrite, Nitrate, and pH test kits. Cost is $9.49 for the Ammonia kit, $7.49 for Nitrite from Drs. Foster and Smith; each kit includes 20 tests and you can buy refills at a reduced price after you get the initial set up. 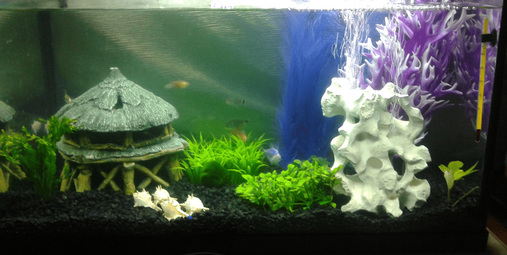 3. Strip Tests
The main benefit of this option is that strip tests are easy to administer. You dip the strip into the water and you'll get your results in seconds. You do not have to worry about chemical mixing or keeping your test tubes. On the downside, strip tests are more expensive than other tests.

Cost. A pack of 25 strips will set you back $13.99 (Drs. Foster and Smith package of both 5-in1 test kit and ammonia dip test strips). MarineandReef.com sells the Lifegard 6 Way Test Strip (25 for $19.80) includes tests for ammonia, nitrite, and nitrate.

How to Improve Your Tank's Nitrogen Cycle
In order to improve the nitrogen cycle in your tank, you want to focus on biological filtration equipment as well as limiting waste ending up in the tank in the first place. Ammonia levels come straight from fish waste, uneaten food, and rotted plant material. To cut down ammonia, concentrate your efforts on reducing the sheer bulk of waste in your tank. You can do this by avoiding overfeeding and by removing dead or dying plants from the tank promptly. Making sure you have a high-quality filter installed that provides both mechanical and chemical filtration is also important.

To help the nitrogen cycle in the tank, consider having as many biological filters as you can work into your aquarium's design. Choose a filter that offers biological filtration through a biowheel or consider installing a sponge filter as a supplemental filter. Providing flat surfaces like broad-leafed plants and rockwork in your tank can also give beneficial bacteria space to multiply. For saltwater tanks, protein skimming is a must. Once you have established the nitrogen cycle in your tank, you then want to make sure to keep it going. Performing routine water changes will help to get rid of nitrate from the tank water after your beneficial bacteria have dealt with it – this will also help to renew nutrient sources that the bacteria need to thrive. Avoid cleaning too much of your tank at once or you might risk killing off your bacteria. When you replace your filter media, just rinse your filter instead of scrubbing it clean. You should also be careful not to let your gravel or tank decorations dry out during cleaning.

The nitrogen cycle is the driving force behind a thriving aquarium – either freshwater or saltwater. If you do not take the time to establish the nitrogen cycle before you add your fish, you could be asking for trouble. Fortunately, establishing the nitrogen cycle in a new tank is not difficult, but it will take some time so you need to be patient. By following the advice in this article you can jumpstart the nitrogen cycle in your new tank to make sure it gets off to a good start.
comments powered by Disqus
PREVIOUS
ARTICLE
How To Humanely Euthanize Your Fish
If your fish is suffering, you may want to consider euthanasia as an option to humanely end his pain.
NEXT
ARTICLE
Acrylic Aquariums
Pro and con arguments for using acrylic tanks, common sizes, etc.

How To Humanely Euthanize Your Fish
If your fish is suffering, you may want to consider euthanasia as an option to humanely end his pain.
Changing The Water
Tips to make changing the water easier.
Stacking Rocks in Your Aquarium
Learn how well stacked rocks can add personality and a natural look to your aquarium.
What Is A Refugium
Why people use refugiums with their aquariums?
Aquarium Screensavers
Different kinds of screensavers, top aquarium screensavers available today.
All Glass Aquariums
History of Fish Tank Materials.
Acrylic Aquariums
Pro and con arguments for using acrylic tanks, common sizes, etc.
Aquarium Stands
Discuss the role that aquarium stands have on the fish keeping hobby.
Custom Aquariums
This article delves into the pros and cons of custom built aquariums - and more.
Understanding The Nitrogen Cycle
Understanding the nitrogen cycle and its importance to a healthy tank.
Read more articles (10)